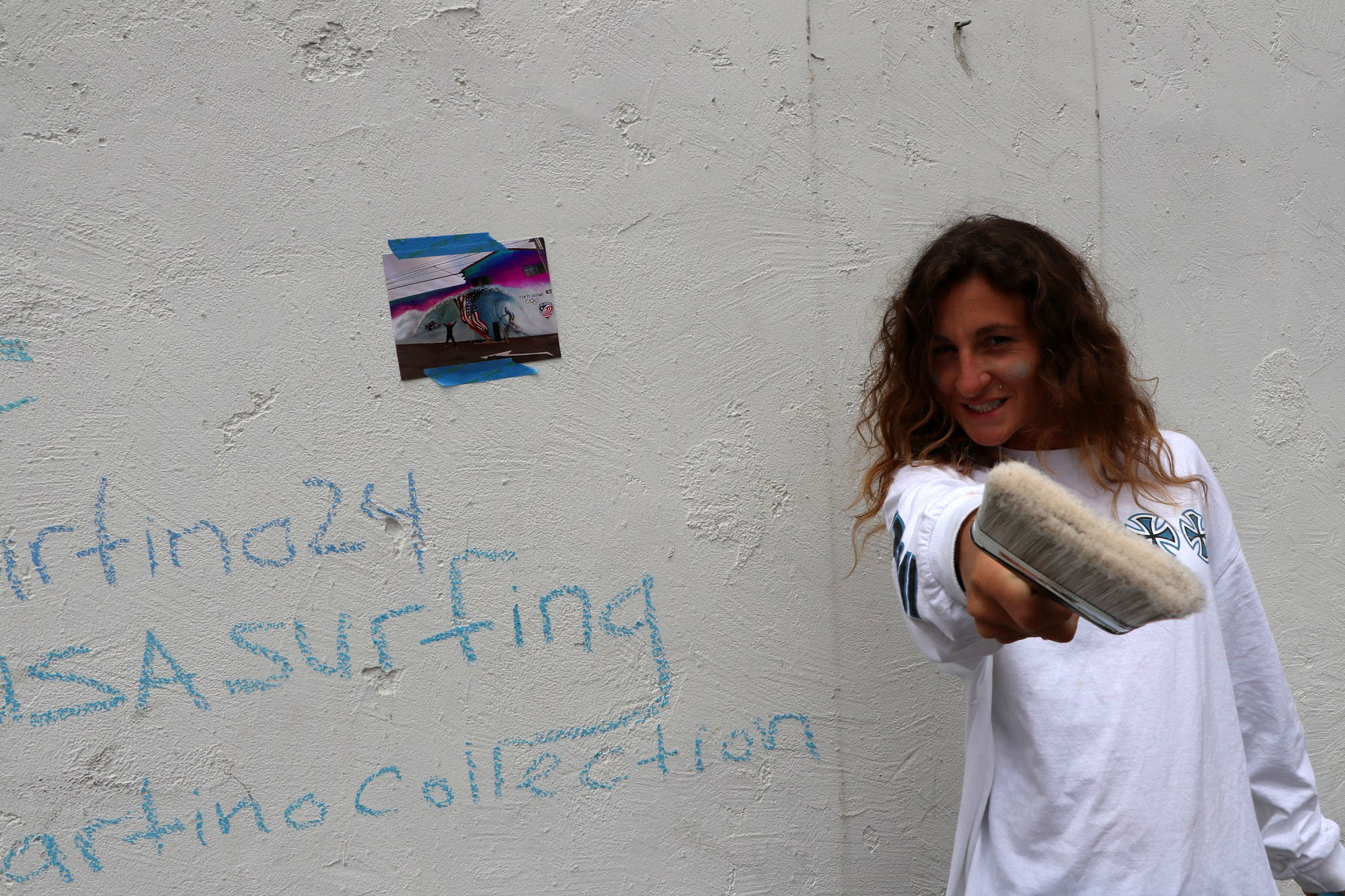 Paint it Gold: Artists Get to Work on Murals Honoring Local Olympic Surfers

When local artist Dana Martino left on a surfing trip to Nicaragua last month, she assumed she hadn’t been picked to paint one of USA Surfing’s murals meant to highlight the sport’s Olympic debut this summer.

“I left on May 11, thinking, ‘Well, that’s over. I’m going to go surfing anyway, so I’m stoked,’ ” Martino recalled of her trip to Central America, accentuating the positive.

She had been one of 16 artists who had submitted a design concept and other application materials to paint one of three murals in Downtown San Clemente celebrating Kolohe Andino and Caroline Marks—two local surfers who earned spots on the first Olympic surf team to represent the U.S. in Tokyo next month.

“Basically, they said they were going to interview some finalists before they picked one, and I didn’t hear anything,” she said.

After a few days of surfing the waves in Nicaragua, though, Martino got a peculiar text from USA Surfing. She should check her emails, she was told. In her inbox was a message, she said, that read, “You’ve been chosen to the do the mural on (Avenida) Del Mar.”

“I was just notified that I won while I was surfing in Nicaragua,” Martino said, adding that her flight home was “the one time I was actually excited to leave Nicaragua; it never really works out that way.”

Flying back to Southern California late Friday night, May 28, Martino had only a couple of days to rest before getting started on her mural, which will adorn the alley-side wall of Kith and Kin Boutique off Del Mar.

“Now I’m here to start,” she said on Tuesday, June 1. “I’m about a week or so behind to start behind the other artists, but I’m not really worried about that.”

Martino’s fellow muralists, Melissa Murphy and Jeff Lukasik, have been hard at work over the past week, completing their paintings for USA Surfing. Murphy’s mural, down the alley off Avenida Victoria, will be featured on the wall of the building that houses 9 Style Sushi and the neighboring liquor store.

“(I’m) so stoked to be able to paint a mural representing Kolohe and Caroline, so stoked for you guys,” Murphy said in a recent Instagram post from USA Surfing.

Murphy, who grew up surfing competitively in high school and college, has painted murals in Huntington Beach. In the social media post, she added that she’s “so excited to go down to San Clemente and represent you guys and paint an awesome mural.”

And one block north of Del Mar, off Avenida Cabrillo, Lukasik’s mural is in progress on the biggest canvas of the group—the wall of Nomads Canteen and adjoining hotel.

“It’s always been my biggest goal to paint more large-scale public murals and to do so in my hometown for something I care so deeply about is really special,” Lukasik, a San Clemente native, said in a separate USA Surfing post on Instagram.

“I’m so excited to see these murals come to life, and hopefully it fires (the Olympic team) up and gets them excited to go over there, knowing that our city and their country has their backs, and hopefully bring back the gold in Tokyo,” Lukasik, who’s “spent countless hours in the water” with Andino and Marks, also said in the post.

Initially, USA Surfing had planned to select only two artists for the murals on Del Mar and Victoria, but after “Nomads saw what we were doing, they wanted to be part of it, so they came on board and self-funded theirs,” explained Kim Tilly, administrative coordinator for USA Surfing.

Each of the business owners whose walls will feature a mural got to select the three artists from a pool of 16 candidates, according to Tilly. Funding for the murals—$2,500 to each artist—came from the San Clemente Downtown Business Association, Tilly added.

The work done to date, Tilly said, has “just been a labor of love, and community support has been amazing so far.” She added that the murals require “a lot of energy—mentally, physically, artistically—to do this, and I think it’ll just really benefit the town and be another source of pride to be a San Clementean.”

“I just love the whole concept, and we’re just excited to have a whole mural like this painted on our wall for people to see,” Zimmermann said.

When completed, Martino’s mural will showcase the two San Clemente surfers—Andino and Marks—barreling through a couple of “powerful waves,” with an American flag at center stage appearing to flow between the two.

The goal, Tilly said, is for the project to be completed by mid-June, giving the two local Olympians, and potentially their teammates, Carissa Moore and John John Florence, a chance to see the murals before flying to Japan.

“We just want the community to support and get behind the idea of surfing, behind the Olympics,” Tilly also said of the project. “A lot of people don’t realize that surfing is in the Olympics. We have four amazing surfers.”

Martino on Tuesday expressed confidence that she’ll be done with her mural by Flag Day, on June 14—a day commemorating the Second Continental Congress’ passage of the resolution establishing the design of the nation’s flag.

A construction lift that the city has funded has allowed the artists so far to work more efficiently, eliminating the need to climb up and down a ladder when they need to mix paint colors, Tilly noted.

However, that very lift—the only one they have for all three to use—could be one of the few things that interrupts the artists’ flow.

“They are all rotating (the lift), and it’s tough, because they get in a flow, and like in surfing, you get in that flow, that up and down—all of sudden, you’re in the flow—and then they have to give it up to somebody else,” Tilly said.

The organization, she continued, is working on a campaign called “Give an Artist a Lift,” to gather community donations to rent another lift. According to Tilly, USA Surfing is looking to fundraise $1,100 for the additional lift.

The murals, Tilly said, will ideally give a boost to tourism in San Clemente this summer, as the city continues to recover from the pandemic.

“We’re hoping that murals kind of bring a new something-something to the downtown area,” she said before touching on what the murals could inspire down the road. “It would be amazing to expand the project and have this be like the mural alleyway, the mural artwalk.”

And following the Summer Games, Tilly hopes the artists will be able to make a few adjustments to the murals.

“We’re hoping that after Japan, our artists can come back and put either gold, silver or bronze medals around (the painted surfers’) necks,” a hopeful Tilly said. “So, that would be awesome as a follow-up. We’re just really excited about the whole thing.”