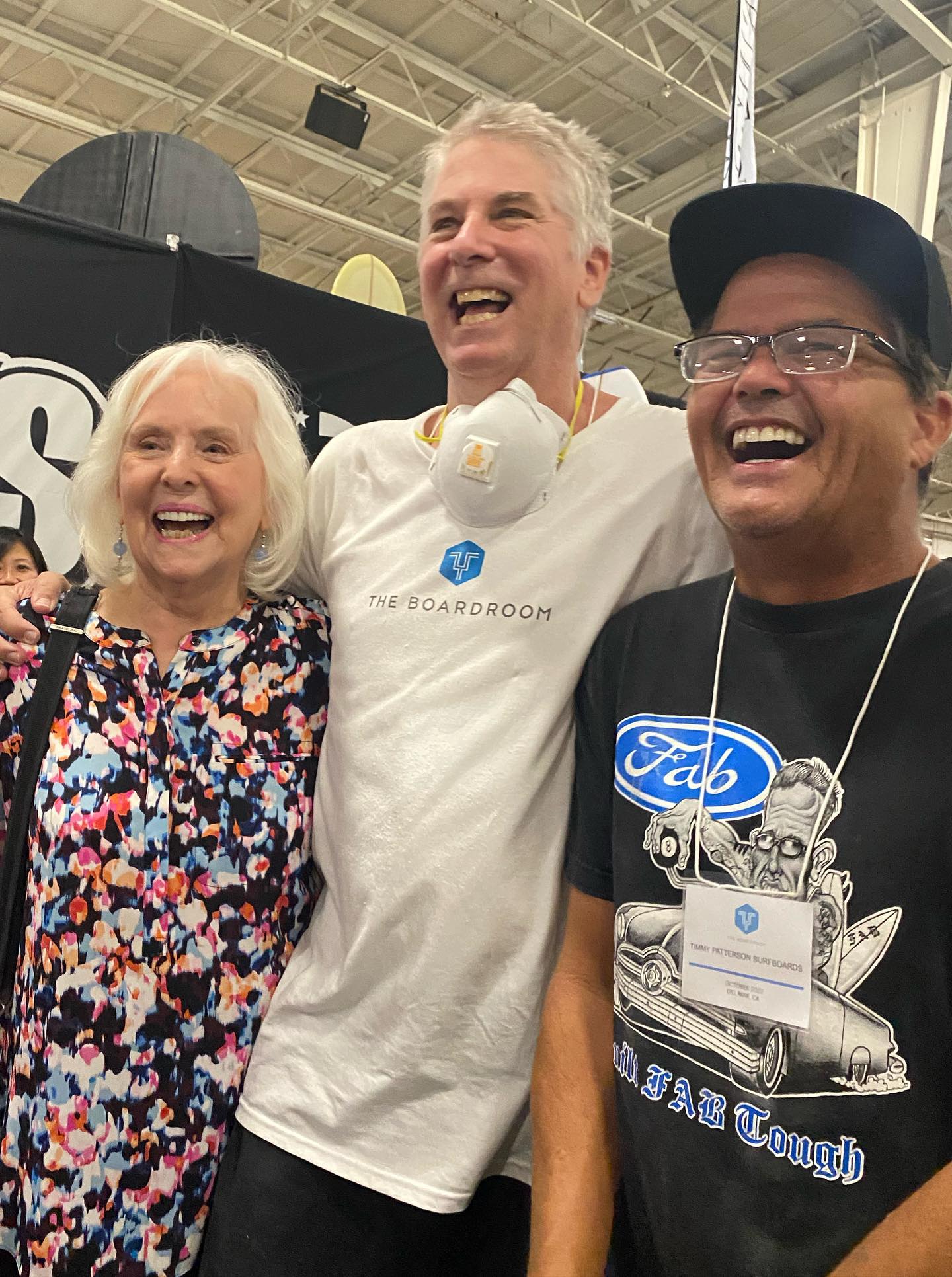 One of the most revered shapers in the world, Timmy Patterson enjoys his time in the sun at the Del Mar Fairgrounds

A testament to just how much surfboard shaping talent there is in this amazing community, the Boardroom Surfboard Show in Del Mar last weekend honored San Clemente icon Timmy Patterson, and in one of those incredible twists of fate, fellow San Clemente craftsman Rick Rock won the Icons of Foam shape-off.

The Icons of Foam competition started in 2007 and over the years has celebrated the work of some of surfing’s most revered shapers, including the late Dick Brewer, thruster inventor Simon Anderson, Pipeline guru Gerry Lopez, as well as fellow San Clemente craftsman Matt Biolos.

This year, the show was dedicated to Patterson, who continues to build some of the best surfboards in the world.

As for Rock, who shapes out of the Los Molinos surfboard ghetto zone and is equally skilled with a planer in his hands as he is with a pair of drumsticks, the win at the Boardroom Surfboard Show is a long overdue acknowledgement of his talents.

Biolos, who’s worked with Rock since 1987, calls the man “an unsung master of surfboard building. He’s a composite creations madman.”

Rock was one of six shapers from around the world who was invited to the Boardroom competition.

Patterson, who has surfboard shaping in his DNA, whittled his first board back in 1977 and has been hard at it ever since.

“My father and his brothers came over from Hawaii. My dad ended up at Windansea. My uncle, Robert, was shaping for (Dale) Velzy, while my dad was making boards for the guys in San Diego. He used to sand boards with a belt sander,” Patterson recalls. “We all surfed; our whole family surfed.”

“Hobie opened up in ’61, I think. Robert called my dad and told him there were jobs up in Dana Point,” Patterson continues. “He’d just had two kids, and I was on the way, so he moved up to Dana Point to work. I grew up in a surfboard factory.”

Over the decades, Patterson has been called on to build boards for some of the most radical surfers in the game. In the 1980s, he was shaping for Christian Fletcher and Matt Archbold. In the ’90s, it was boards for the likes of Mike Parsons and Pat O’Connell.

After the turn of the century, he picked up the planer for world champ Adriano De Souza, Jordy Smith, Brett Simpson, Timmy Reyes and too many others to list here. Currently, 2019 world champ and 2020 Olympic gold medalist Italo Ferreira is the most recognizable name on his roster.

“Interestingly, from Italo to Archy’s boards, the rockers are dead on,” Patterson says. “I’ll bring old boards out, put a rocker bar on them, and it’s pretty much the same as today. I can take one of Pat’s old ones, or Timmy Reyes’, or Brett Simpson’s, and measure it, and it’s literally the same. Maybe there’s a one-sixteenth of an inch here or there, but that’s usually just volume flow—added volume in the nose and fuller rails.”

Patterson and Rock are part of the long, colorful history of surfboard building in the Los Molinos area, and as we saw last weekend, they’re making sure that the tradition is in good hands.

As far as his philosophy on the state of surfboard shaping today, Patterson says, “If you’ve never hand-shaped a board and you’re just designing it on a computer, the tendency is to want to make it look pretty. But that’s not always reality. It doesn’t matter what it looks like, you have to get it in the water.”