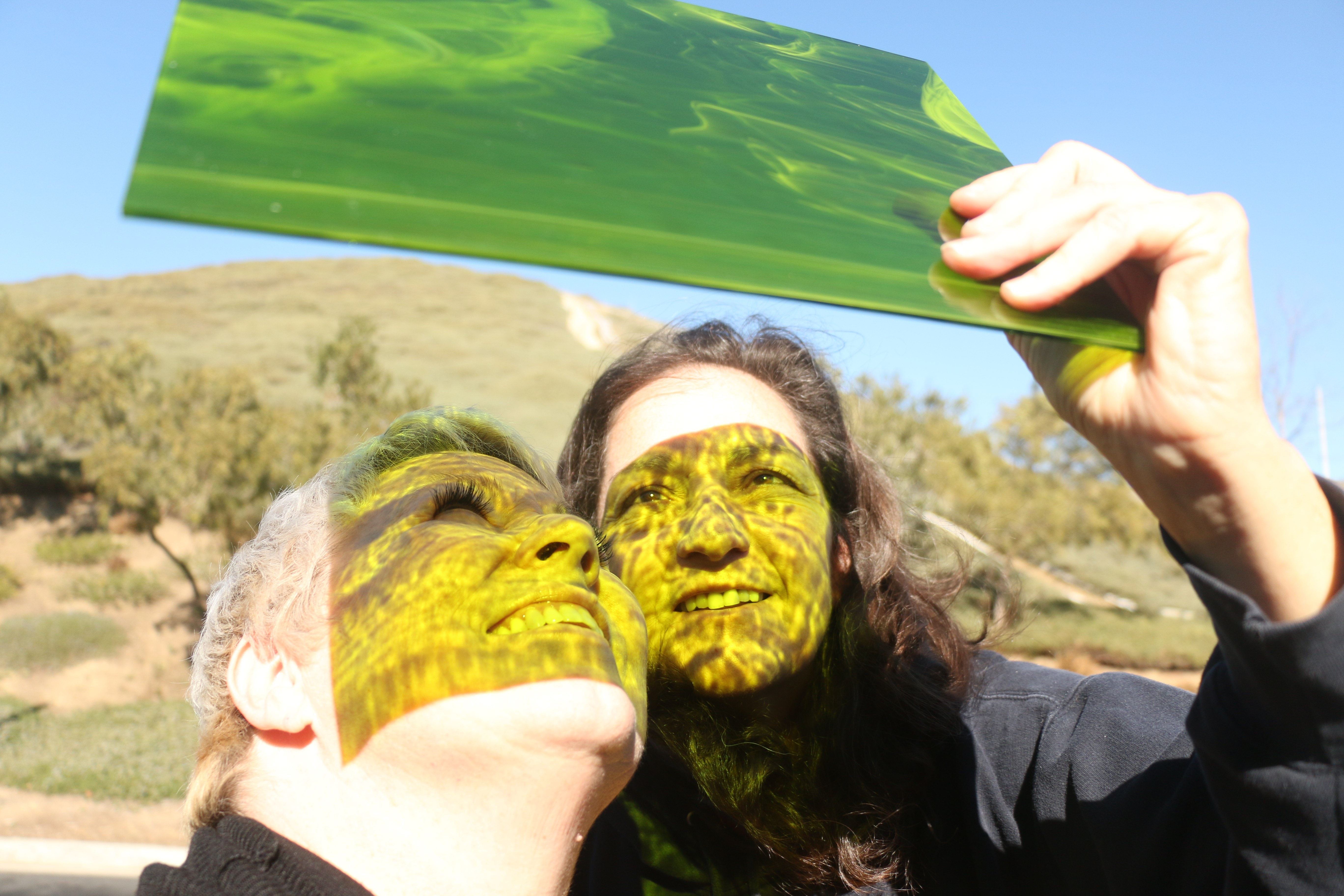 Piece be the Journey: SC Mosaic Artists Work to Establish Foundation for Schools

Patience and creativity are tenets of what it takes to create a 5-foot mural using tiny pieces of glass attached to a mold nearly the size of a human.

One such design is a surfboard completely covered in designs with 1-square-inch colored glass.

San Clemente mosaic artists Sandy Stevens and Julie Dickey have learned just how much concentration and planning it takes to create these colorful pieces.

“It’s not like we can just sit down and whip these out,” Stevens said. “It’s a challenge, but we love challenging ourselves.”

Their ultimate goals, however, are higher than just making house decorations in a garage.

Through instructor Katherine England of Fullerton, the dyad gained the skills to produce a 5-foot mosaic that will be auctioned to benefit the All the Arts for All the Kids Foundation.

Both Stevens and Dickey want to establish a philanthropy similar to that for San Clemente schools and plan to do some outreach during the next month.

“All the Arts for All the Kids was created when the Fullerton School District lost major funding due to budget cuts,” Dickey said. “They provide extra money to the schools for visual arts, theater, music—all the things the schools don’t have additional funding for.”

Dickey said the auctions have raised $1.8 million for art programs in Fullerton.

[box] How to Get Involved

“We finally have something where we can show what we did somewhere else, and now we want to bring that here,” Dickey said.

Additionally, Stevens and Dickey worked on murals near South Los Angeles and Orange County. The projects they helped with guided homeless people to put together the artwork on the walls around community gardens and as a result has helped people build a sense of accomplishment and get off the streets.

“They’re supporting themselves and they have a shop where they sell their artwork,” Stevens said.

“Art is very therapeutic, and when you’re not as talkative as some people, this gives you a way to express yourself,” Dickey added.

The two said they plan to host classes at Stevens’ residence in the next two months. They also have been working with The Arts Project of Orange County.

Sandy said she began working with glass mosaic art about eight years ago as a way to do something constructive and take her mind off a health scare.

“I’ve always loved glass and mosaics and have been drawn to it,” Stevens said. “I just started doing it and never looked back; it’s my go-to. I can stay up all hours of the night getting lost in it.”

Dickey said she also was in the midst of a “rough patch” in her life and found solace in piecing together the unique shards to make something identifiable and visually pleasing.

“It’s helped me focus on something else than what was going on, and I fell in love with the colors and all the different glass,” Dickey said.

The two met through Dickey’s husband about a year ago and discussed the craft for hours in a Lowe’s garden center.

Together they said they’ve collaborated on a couple dozen pieces.

“We don’t usually have one thing going at a time,” Dickey said. “We’re gathering impetus to get the next art show going.”

They said the peacock took about 24 hours a day worth of work for more than six weeks.

The Fullerton School System (check) gave them the design for the substrate template, but most of the time they make their own molds, which can include fire hydrants, dogs, orbs, hearts, bear faces and more. They also put together beaded mosaics.

The foam is molded and then three layers of mesh is put on top of the shape before the plaster is applied.

Intricate glass is not cheap—some of the square-foot designs can cost as much as $100, but typical glass costs about $8. The glass shards are randomly broken apart but for circular pieces they heat the materials above 775 degrees Fahrenheit and let heat and time take over.

Every piece of glass is cut and grinded to fit where it needs to go.

“You don’t draw each individual tile, but you cut the glass according to the color you want,” Dickey said.

The pieces look as though they’d weigh as much as three grown men, but because they’re all pasted to Styrofoam even the largest mosaics can be as light as 70 pounds.