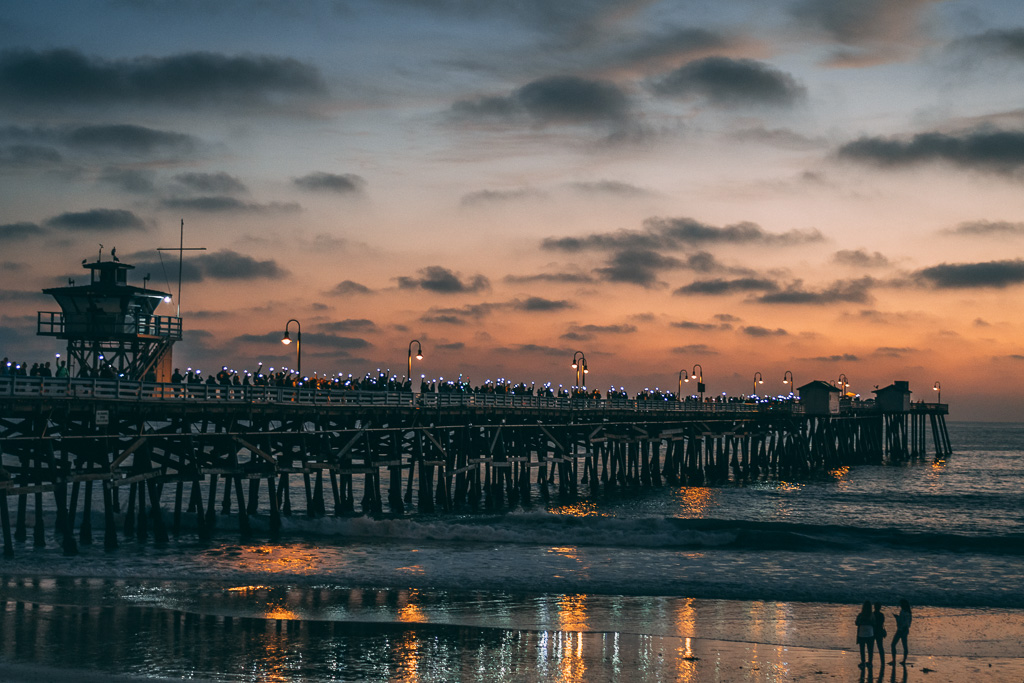 PierPride to Light Up Pier with Holiday Spirit

Featured Photo: Crowds gather for the PierPride Foundation’s 2018 Light up the Pier Event. For this year’s Light up the Pier, the local nonprofit will premiere its holiday lights that have been installed along the historic structure. Photo: Noah McPherson/File

Those visiting the San Clemente Pier and Pier Bowl area after sunset on Thursday night, Oct. 7, will get a sneak peek at the newly installed holiday lights adorning the historic structure where the PierPride Foundation recently completed its latest project.

As part of PierPride Month and the nonprofit’s yearly Light Up the Pier event, PierPride Foundation will flip the switch on the new holiday lights for the night. The lights are not expected to officially go on until November, closer to Thanksgiving, said Eileen Kawas, the foundation’s president.

“We’re very excited about the holiday lights, and, of course, we hope the public will come down and take a look at them and support them through the holiday season—let us know if they like them or not,” Kawas said.

The year’s event—markedly different from years past, when participants would use their cell phones and flash lights to illuminate the pier—will cap off the nonprofit’s project to upgrade the structure’s electrical system so the lights could be strung.

PierPride, which was formed to raise money toward renovations on the historic pier, first announced the lighting project in August 2020, when the nonprofit unveiled the remodeled restrooms and mural.

Amid the pandemic last year, Kawas had described the electric upgrades and holiday lighting plans as “Hope for 2021.”

“That was our gift to the city—not only lights, but electrical upgrades so we would have future events on the pier,” Kawas said of the project this week, adding that “the electrical system couldn’t support (certain events), so hopefully this is setting the scene for the future.”

The lights are scheduled to go on after sunset, at approximately 6:30 p.m.

Continuing its PierPride Month festivities, the foundation will host a pier jump event on Saturday morning, Oct. 9. Those who won the pier jump during the nonprofit’s auction this past spring will leap from the pier near the Snack Shack at around 11 a.m.

About a half-dozen people, including Councilmember Chris Duncan, will participate in the jump, which will be supervised by lifeguards from the city’s Marine Safety Division, according to Kawas.

For 2021, PierPride has been raising about $75,000 to refurbish the Snack Shack building, a popular concession stand among visitors and anglers at the end of the pier. Those funds would help the city make enhancements to the shack and outdoor eating area.

Kawas said the plan is to hopefully break ground on those renovations within the next few months. Next on PierPride’s list of projects and fundraising efforts is a plan to enhance the entrance of the pier.

“That will be our 2022 project: a big redo of the pier entrance,” Kawas said.

Such enhancements, she said, include updating the landscaping and lighting, as well as addressing safety issues by directing pedestrian traffic to the underground tunnel below the train tracks. Kawas said PierPride doesn’t yet have an estimated price tag for the project.