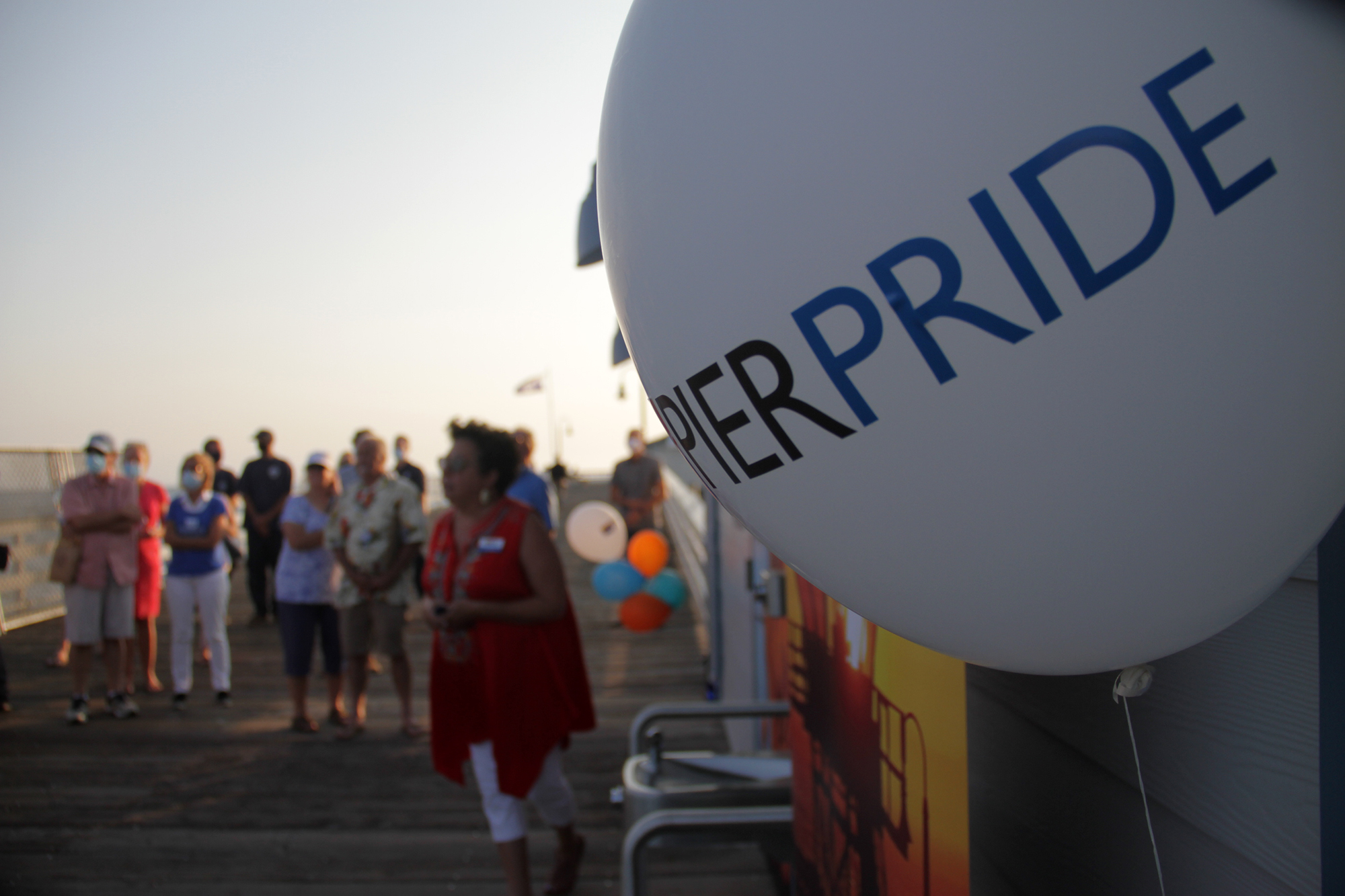 “Welcome to our restroom,” an elated PierPride President Eileen Kawas joked to kick off an unveiling ceremony the organization held on Tuesday night. “We did it! Can you believe it? We did it!”

Acknowledging the excitement of many of the PierPride members over the revitalization project, Kawas garnered laughs after teasing Public Works Director Tom Bonigut, who had told her that he “couldn’t believe we’re all getting excited about a bathroom.”

The refurbished bathroom includes all new fixtures, such as sinks, toilets, electric hand driers and partitions, as well as a drinking water and bottle-refill station—all of which, Bonigut said, are ADA-compliant.

Additionally, the restroom features new skylights, painting, walls that are designed to prevent graffiti and a bird deterrent system to keep them from roosting atop the structure, Bonigut explained.

“Short of actually starting from scratch, this is as new a building as you can get without starting over; we pretty much almost gutted the thing,” Bonigut said.

And adorning the exterior of the restroom is artwork by local artist Andi Goud, who was selected by officials from PierPride, the city and the San Clemente Art Association as part of an art contest the nonprofit launched last fall.

A mural by Goud, titled “Open Door Policy” that depicts an octopus walking onto the pier, is now displayed on the bathroom’s utility door. And on the side of the structure, visitors walking up the pier should also notice a large orange “SC.”

To help with the overall aesthetics and design of the bathroom, PierPride worked with RSM Design.

“What we did working with the PierPride Committee was help them bring their visions to life, envisioning the colors, the signage, the lighting, the water fountain, and really helping them have some great ideas collaboratively as a whole team,” said Harry Mark of RSM Design.

PierPride, which was formed to help raise money to go toward renovation projects on the historic pier, presented the city with $50,000 in donated funds to help pay for the $150,000 bathroom project.

The group “was formed to fill gaps in funding between what the city could provide and what you and I would like to see on the pier,” Kawas explained. “Every year, we pick a different project. The first year, we went really bold; we painted the pier . . . and this year, we decided to do the restroom.”

Praising PierPride for the donation, Bonigut noted that the council had allocated $150,000 toward the revitalization project, and came in about $20,000 to $25,000 under budget.

“So, with your donation, that really helped stretch our dollars,” he said.

With the restroom project now completed, PierPride is turning its focus to a new project Kawas referred to as “Hope for 2021.” The goal, she said, is to raise another $50,000 for the city to make electrical upgrades so holiday lights could be strung along the pier.

“What does ‘Hope for 2021’ look like? Imagine you’re in the Pier Bowl, and you’re looking down at the pier and it is outlined with holiday lights,” Kawas said. “So, holiday lights on the pier—that is what Hope for 2021 looks like. Now, in order for that happen, we have to have an electrical upgrade, and that’s what our gift is going to be to the city.”

“On Oct. 22, we’ll be meeting up at the Casa, and all platinum sponsors will have a hand on the switch and will turn on the lights and flip the switch for the holiday lights,” she said.