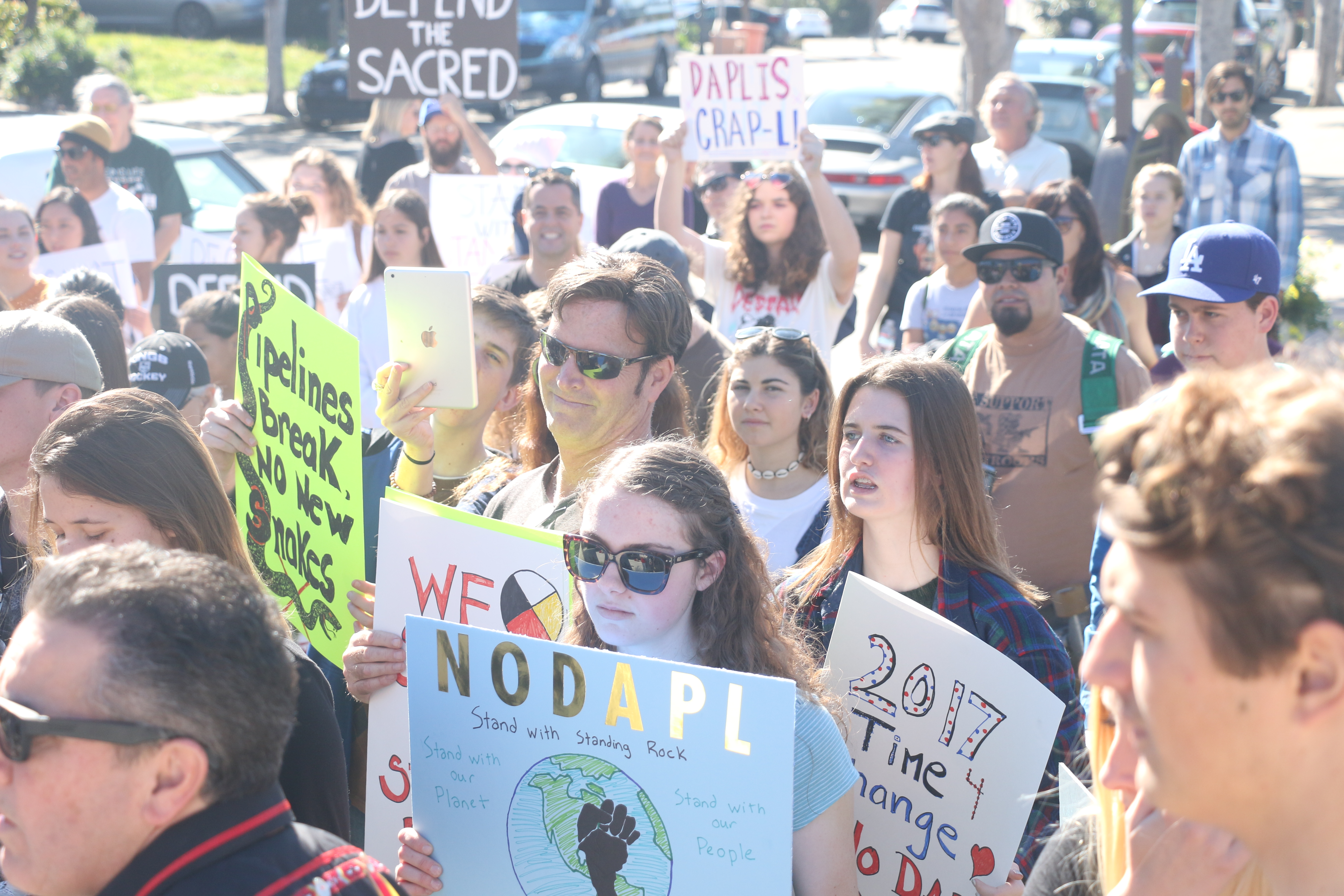 For at least the last two weeks, people around the nation have protested different actions taken by Donald Trump in his first days in office, and San Clemente has been no different.

On Saturday, Jan. 28, Team Zissou, an environmental awareness group comprised of San Clemente High School students, organized a local march protesting Trump’s order to allow for two controversial pieces of oil and gas infrastructure—the Dakota Access Pipeline (DAPL) and Keystone XL Pipeline. Those opposing the pipelines marched from the Community Center around Del Mar and back down to the point of origin, the same route the San Clemente Women’s March on Washington took last week.

Protestors chanted “Water is Life” while they walked, a common refrain on the Standing Rock Indian Reservation in North and South Dakota, where “water protectors” have set up multiple camps to peacefully protest the construction of DAPL.

The Keystone XL Pipeline was proposed in 2010 to transport tar sands oil from Alberta, Canada, to refineries in the U.S., where it would then be exported. Former President Barack Obama vetoed a bill allowing for its construction in 2015, but Trump has already taken action to permit it.

Jackson Hinkle, president and founder of Team Zissou, spoke to the protesters who attended.

People gathered on the front lawn of the San Clemente Community Center on Saturday, Jan. 28, to protest the continuation of the Dakota Access Pipeline and Keystone XL Pipeline. Photo: Eric Heinz

A woman carries a sign during a protest march on Saturday, Jan. 28, along Avenida Del Mar. Photo: Eric Heinz

A woman listens to a prayer given by Theresa Romero, a chairwoman of the Tribal Council of the Juañeno Band of Mission Indians-Acjachemen Nation, on Saturday, Jan. 28, at the San Clemente Community Center. Photo: Eric Heinz

“When President Trump gave the approval for the pipeline to be built, our club saw it as a moment where we should take a stand,” Hinkle said, adding he was inspired by demonstrations that took place in Los Angeles the week prior. “I truly believe the administration that’s in office now is not going to pull back on this. All we can hope for is (that) enough people seeing the issues here, will create a big enough movement to lead the change.”

Hinkle said he is optimistic the protests, locally and worldwide, will have enough momentum to sway the minds of the powers that be.

“It’s an injustice that this pipeline (DAPL) is going through the Indian reservation, and these people are nonviolently protesting, yet they’re being shot at with rubber bullets,” Glaser said. “Not only does the pipeline have the potential to pollute waters … it is so wrong. It takes away their rights.”

Theresa Romero, a chairwoman of the Tribal Council of the Juañeno Band of Mission Indians-Acjachemen Nation, was at the march. Romero said the tainting of water sources from the pipeline and destruction of sacred native lands must be prevented.

“It’s going to be a tough battle,” Romero said. “It’s interesting we find out that when the pipelines went through Bismarck (North Dakota), it was rerouted because it was a threat to public health, and now that it’s going through native lands and public lands, it’s not about public health.”