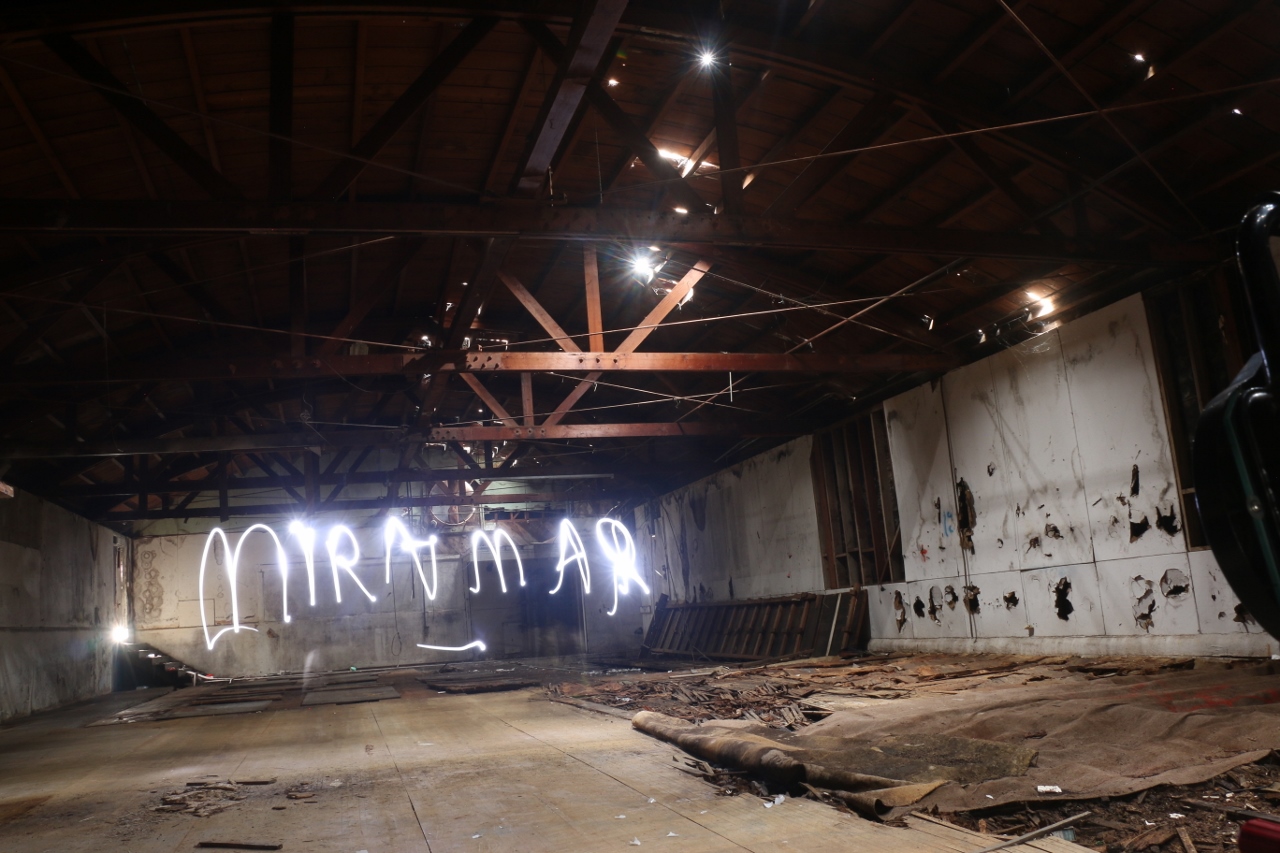 The Miramar Theater has sat dormant for 25 years. Now, the owners of the theater are making strides to rehabilitate the facility and the old bowling alley. Photo: Eric Heinz

Seats inside the Miramar Theater along with plaster and other materials have deteriorated since the closing of the facility. Photo: Eric Heinz

The old projector of the Miramar Theater has long since been neglected. Photo: Eric Heinz

Daniel Conrardy walks through the darkness of the Miramar Theater on June 8, guiding his way by flashlight. Photo: Eric Heinz

In this long-exposure photo, done with light painting, the bowling alley portion of the Miramar facility shows its wear. The ceiling will have to be completely redone, according to the owners, but a sky-light roof is planned to be constructed in its place. Photo: Eric Heinz

The old bowling alley adjacent to the Miramar Theater will need major renovation work, should the owners’ plans be approved by officials. Photo: Eric Heinz

An old light fixture hangs from the walls of the defunct Miramar Theater. Owners have plans that have been making their way through city government to revamp the old facility. Photo: Eric Heinz

Daniel Conrardy walks through the darkness of the Miramar Theater on June 8, guiding his way by flashlight. Photo: Eric Heinz

Daniel Conrardy, an architect with experience in renovating historic buildings, shows the new plans for the new Miramar Event Center on Thursday, June 8, inside the facility. Photo: Eric Heinz

A major step toward revamping the Miramar Theater was taken on Wednesday, June 7, when the San Clemente Planning Commission voted 6-0-1 to approve the renovation plans and several permits for the center.

Commissioner Wayne Eggleston recused himself and spoke in favor of the project during public comments, as he has been a consultant with the owners, El Camino Real Estate Holdings, LLC.

The owners of the Miramar, which will be known as the Miramar Event Center, will now seek to forge a contract with the city of San Clemente regarding parking waivers, which has been one hurdle to moving the plans forward.
On Thursday, June 8, Daniel Conrardy, an architect with experience in renovating historic buildings and who has been working with the owners of the Miramar, took the San Clemente Times through the vacant buildings.

The conditions are not great. While the structure itself is intact, minus the condition of the tower that will need to be almost completely redone, the inside is pretty grim. It’s riddled with mold, everything smells awful, masks must be worn just to go in and there’s more. This will be a lengthy process. The bowling alley is in similar condition, but the problems there are a bit different. The roof is all but dilapidated and weathered, and it will need to be rebuilt.

Various restaurants are planned to be put inside the bowling alley, and the interior of the theater will be interchangeable to allow for various events, such as plays, weddings and more. No restaurants have been selected to operate in the bowling alley at this time. The plans show that there will be a sound wall with some visibility into the center, and a bar is planned inside the main area of the facility.
Permits approved by the Planning Commission include allowing live entertainment with amplified music, alcohol sales and 92 parking waivers.

According to Amber Gregg, the city’s interim planner, traffic studies have shown that although the number of parking spaces in the area may not seem like enough, the maximum usage of the spaces is not overly burdensome to the area.

The Planning Commission approved the project but with the caveat that the owners enter an agreement with the city regarding parking.

“The project supports the city’s General Plan goals in creating a community and tourist-serving entertainment hub for the North Beach area,” Conrardy said. “This project will complement the restored Casino San Clemente and Beach Club in creating Ole Hansen’s vision.

Rehabilitation of the Miramar could be essential to creating a historic district in North Beach. Gregg said following standards set by the Department of the Interior to fix up the location will maintain the district’s eligibility for the National Register of Historic Places.

“(The standards are) basically a road map to make sure there’s no damage to the historic property, and we would apply those to make sure the building was not going to lose its historic designation,” Gregg said.
Should the City Council approve the plans and the parking agreement, the Miramar project will be submitted to the California Coastal Commission.

There are also options for additional parking lots in the future across the street on the north side of El Camino Real, but if it ever comes to that, those projects would also have to be considered by the Coastal Commission.