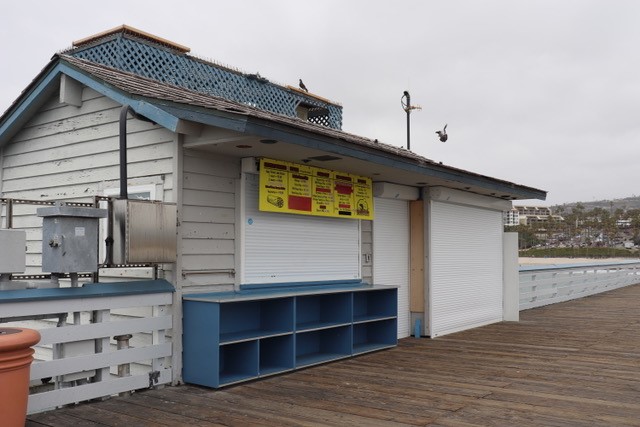 In 1983, a storm hit the Southern California area, warping the iconic San Clemente Pier and taking with it the shop at the end of the 1,296-foot structure. Almost 40 years later, the Pier Bait & Tackle shop that took its place—it’s also known as the snack shack—is facing a much-needed renovation and a possible change in management.

Rebecca Genszler, a San Clemente resident of more than 10 years, began working at the shack in 2017 under the management of Scott Shipley. When he moved away in 2019, Genszler took over as concessionaire, inheriting the lease and contract with the city.

“My dream was always to have a bed and breakfast, but in California, it’s very expensive to own a business,” said Genszler, who had previously worked at a corporate job and would visit Shipley at the stand on the weekends.

“All of a sudden, (Shipley) goes, ‘I want to move to Texas; do you want to take this over?’ ” she recalled of one of those visits. “I quit my corporate job, worked with him probably about a year and a half, and he started teaching me all the ins and outs of what he knew.”

While Genszler currently runs the shop at the pier, a city council vote in the coming weeks could prompt a shakeup in management at the city’s four concession stands: the pier snack shack, as well as shops at T-Street, North Beach and the Richard T. Steed Memorial Park.

At the pier location, councilmembers will consider whether to renegotiate the terms of the current contract with Genszler, put out a new request for proposals (RFP) from prospective operators, or hand the reins over to the Beaches, Parks and Recreation Department.

The news that the council was going to take the matter up for consideration came as a surprise to Genszler, who the city acknowledged has expressed interest in continuing to run the shop.

“I knew nothing of this going on … it was a shock,” Genszler said about receiving the city’s staff report. “If they think it’s easy to run that out there, it’s not.”

Under the current terms of the contract agreement, Genszler currently pays a base rent of $300 per month, or 6% of the gross sales from the stand, whichever is higher, the city explained in its report.

The city’s recommendation to the council is to initiate the RFP process, soliciting bids from potential operators interested in running the stand, while also raising the price of rent and increasing the operating hours.

In November 2020, the city outsourced an operational review of the four city-owned businesses to Profitable Food Facilities Worldwide in order to create a plan to optimize customer service and revenue.

The PFFW’s review of the snack shack reported that “the current operators have a good relationship with the city and have been happy with their operation,” giving Genszler a shred of hope, as she said that she’s witnessed the commercialization of small businesses.

The council was slated to consider the concession contracts during its April 20 meeting; however, the city’s consultant, who was going to present on the item, was unable to make the meeting because of traffic delay. Sund asked the council to table the discussion until May 4.

Genszler said that she believes it will affect the tight-knit community and the relationships that have been built with the community over the past few years.

There are several challenges the shack faces, she explained, such as attaining vendors, providing all the equipment needed to run the shack, the upkeep and, of course, the COVID-19 pandemic.

Due to the ongoing pandemic, the snack shack is now open only on weekends, whereas previously, it was open five days a week and six during the peak summer months.

Talks of a change in management at the tackle shop come as the local nonprofit group PierPride Foundation looks to renovate the facility. Genszler said she hopes the project will provide a better atmosphere for her employees, the customers and the wildlife.

The nonprofit has been dedicated to the maintenance, restoration and protection of the iconic San Clemente Pier, working with the city to fill the gaps and supplement costs needed for repairs.

To help pay for the foundation’s efforts in renovating the shack, PierPride members will host a virtual auction from May 19 through May 25 in the hopes of reaching their $75,000 fundraising goal.

In February 2020, the foundation conducted a survey of local residents to determine which renovations were the most important to them.

“This is the guiding line as to what we do; that’s one of the factors, as well as working with the city,” said PierPride President Eileen Kawas. “We like to understand what the community is really interested in as far as the projects that we undertake every year.”

The foundation and Genszler created a list of updates and renovations they hope to see, such as added tables and seating areas, the addition of more trash and recycle bins, public art installations and more.

The foundation hopes to reach its fundraising goal by the end of the auction so that renovations can begin in the fall after the summer boom. Hopefully, Kawas said, the project will be completed in 2022, clarifying that “it’s up to the city as to when they can handle” the renovations.

Pre-registration for the auction opens on May 5, and citizens will have a sneak peek at the items up for grabs, which include a stay at The Ritz-Carlton in Dana Point, a private plane for two to Catalina Island or Big Bear, and pier jumps—a highly sought-after experience.

Kawas made it a point to state that these pier jumps are coordinated with the lifeguards, and they are the only legal way of jumping off the pier.

Ultimately, Genszler hopes to stay as concessionaire of the snack shack, if not permanently then at least through the end of her contract, which she said is up in 2023. However, she’s unsure if her current position as concessionaire, coupled with her community relationships, will be enough leverage for her to keep her contract with the city or if the city will want to take the reins once the shack is renovated

“I’m sure they would still be successful, but it’s not an easy thing to do,” Genszler said of an outside company running the shack. “Building a rapport with the customers … yes, you have to make revenue, but out there, people like to stop, they like to talk, to come out and have a cup of coffee … that’s what San Clemente is all about.”

Editor’s Note: This story has been updated to reflect the city council’s delayed consideration on the matter.