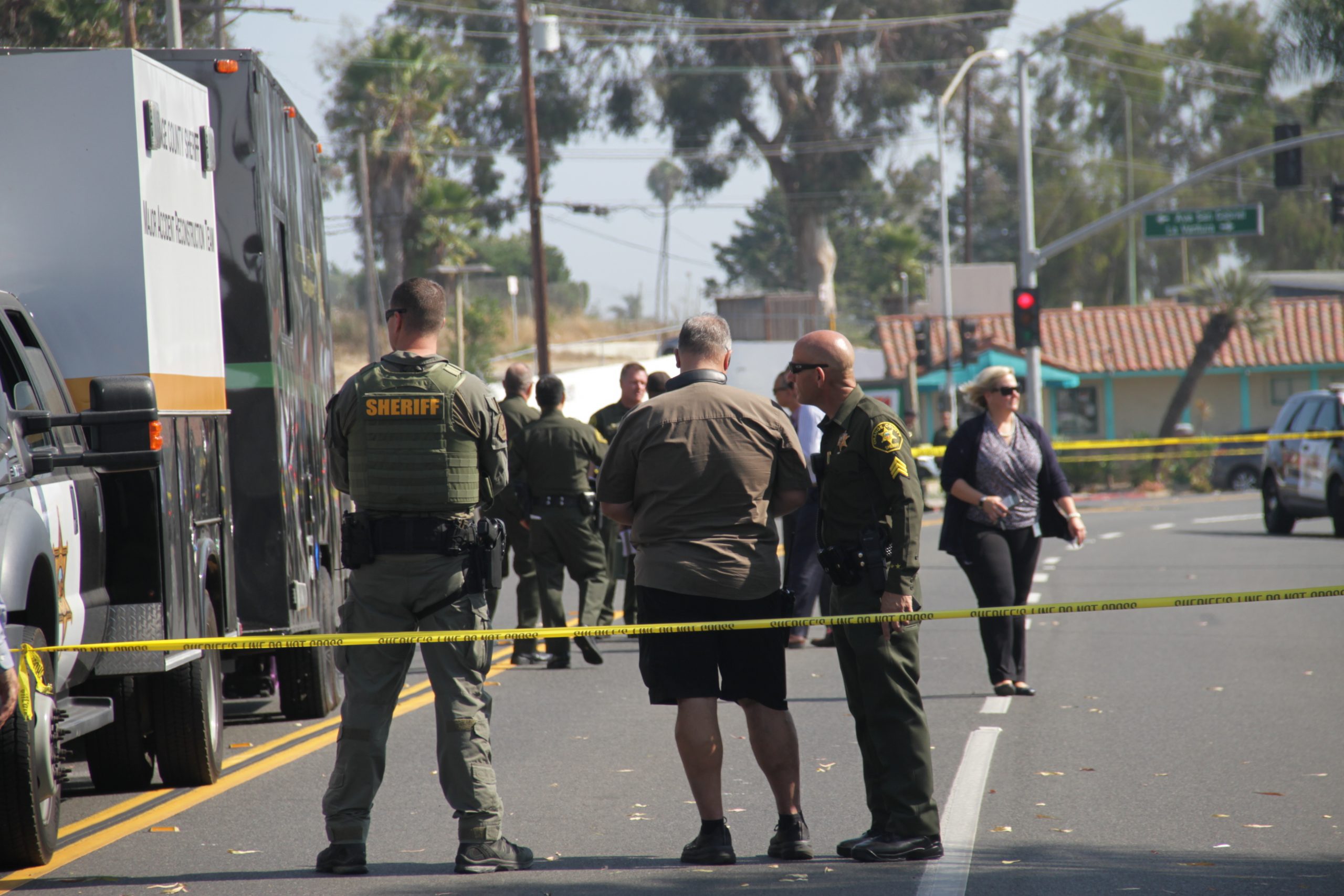 Voters Approve of OCSD’s Services, but Some Support a Local Police Force

In February 1992, the San Clemente City Council voted, 4-1, to disband the town’s 65-year-old local police department and instead contract services with the Orange County Sheriff’s Department (OCSD), saving the city about $2 million annually.

The decision at the time, news files state, was met with opposition from some of the residents and a few officers who were worried about what the change meant for their futures.

Rich Corder, who worked as a police sergeant for both the San Clemente Police Department and OCSD from 1979 until his retirement in 2006, recalled the moment the vote came down.

“All of the officers, we were parked down there around the Triangle, where all the bars are,” Corder recalled. “We were parked there waiting, and when that happened, we found out that we were going to the sheriff’s department.”

“That’s how we got the news; we were all waiting for that council meeting to find out what the vote was, and that’s how we found out,” continued Corder, who now announces the San Clemente High football games through the “Friday Night Live” broadcast. He later added that “most of the SCPD officers were worried about a new change—most of us.”

Corder explained that their worries were essentially rooted in the “unknown” nature of the situation, as the department had been in existence for the previous 65 years.

“That is what we all knew. There were questions about it,” he said. “Like I said earlier, we were worried, I mean, naturally.”

Those officers’ worries—including those of Corder—however, were soon alleviated, he said, all because of Lt. Tom Davis, the town’s first police chief under OCSD. Davis, Corder said, led a successful transition.

“There was not a better man anywhere that could have made the change as smooth as he did,” Corder said.

Asked what some of the key differences were between the SCPD and OCSD, Corder said the services were essentially the same. But, he added, the sheriff’s department, being a larger organization, has more resources and manpower readily available throughout the county when it comes to responding to special events, or—more recently—protests.

“They had a show of force and there were no problems at those events; whereas you look at other cities, there were lots of problems,” Corder said. “But it was under control here in San Clemente, and that’s good for the department and good for the people protesting.”

As for the residents’ concerns, Corder remembered a short-lived effort by some who tried to relaunch the SCPD. But they soon realized that having a local police force wasn’t feasible, and the initiative was quickly put to rest.

“The endeavor was short-lasted because of the astronomical cost,” Corder said. “It was not feasible; it was too much money.”

According to a Los Angeles Times story on the council’s vote, the first two years of the city’s contract with OCSD cost $6.3 million for each year, saving the city about $2 million annually.

Now, nearly three decades since the city made the transition, resident approval over OCSD’s services in town appears to be strong, but so does an idea to revive the SCPD, according to the results of a recent city-initiated survey of 300 likely voters.

WHAT THE SURVEY SAYS

The city this past March contracted Probolsky Research to poll San Clemente residents to gauge their thoughts on five key policy areas: a local police department, the Clean Ocean Program and Fee, marijuana cultivation, homeless shelters and an increase in the city’s hotel tax, or transient occupancy tax (TOT).

Among the issues that residents felt should be a top priority of the city council, “reducing crime, gangs, drugs (and) graffiti was of the second-highest importance, with 46.7% of the respondents agreeing it should be on the list. The top priority, which received nods from 76.3% of the participants, was to address homelessness.

Near the onset of the survey, participants were asked whether they approved or disapproved of OCSD’s services in San Clemente. The survey found that 47.7% of the respondents said they approved, while only 22.3% disapproved and 30% were unsure or didn’t want to answer.

Among the 65-and-older bloc of voters polled—the largest contingent in the survey—49.5% approved of OCSD’s job. Nearly 49% of Republican voters, another large bloc, said they approved, while 24.3% were unsure and about 27% disapproved of OCSD’s services.

OCSD’s biggest fans came from no-party-preference voters, as 65.1% of them said they approved of the job the department was doing in San Clemente. More than 22% were unsure or didn’t want to answer, and only 12.7% disapproved.

The sheriff’s department got the lowest approval rating from Democratic voters, with only 30.4% of them saying they approved of OCSD’s performance. Nearly 46% of them were unsure, and 24.1% said they outright disapproved.

The voters polled were later asked for their thoughts on the city bringing back the long-defunct SCPD, and ending its contract with the sheriff’s department.

What the city found was that nearly 48% of the voters initially supported the idea, but after learning more about the costs associated with such an endeavor, as well as other aspects of OCSD’s services, the voters’ support dropped to 41.3%, while the rate of voters likely opposed grew from the initial 26% to 37% after being more informed.

Asked what his thoughts were on reviving the SCPD, Corder was adamantly against the idea.

“I personally do not think it’s possible or feasible to start up another police department. The sheriff’s department is a great organization,” Corder said.

In the survey, pollsters told the respondents that it would cost the city $25 million a year for the town to have its own police force—an increase of $9 million compared to the Fiscal Year 2019-2020 contract with OCSD.

Support for an SCPD sharply diminished to 20.3%, while opposition grew to 50%. About 14% said they were unsure, and 15.3% said it made no difference to them.

The voters were then asked how they felt about the city creating a regional police department with nearby cities such as Dana Point. About 18% said they were more likely to oppose a regional department, and 54% were likely to support the idea.

According to the survey, the voters were also told that in order to fund the police department, the city would need to pass a parcel tax of approximately $500 per home and other property.

With that in mind, opposition from voters grew considerably, with 56.7% of them saying they were likely to be against an SCPD. Only 17.3% said they would still support the department, and nearly 14% said it made no difference. The remaining 12.3% said they were unsure.

Pollsters later turned to the subject of OCSD’s handling of the homeless in San Clemente, telling participants that the sheriff’s department “has refused to enforce the City’s anti-camping ordinance to prevent homeless people from sleeping on the beach and sidewalks.”

Under the precedent set by the landmark ruling of Martin v. City of Boise, cities and law enforcement are barred from enforcing anti-camping ordinances unless “adequate indoor shelter” for the homeless is offered.

The pollsters then made the claim that the deputies serving in San Clemente “are not the most experienced” and that “they come to the City after working in Orange County jails. If the City had its own police department, it could do a better job of hiring and retaining the best and most well-trained officers.”

In an email to SC Times, Carrie Braun, spokesperson for OCSD, explained that upon completion from the department’s academy, deputies do get assigned to custody operations at one of the county’s four jails.

“After a period of time, deputies are provided the opportunity to work at the courts as bailiffs or they can remain in custody operations,” Braun wrote. “In order to transfer to patrol operations, deputies become eligible through an internal process.”

As part of that internal process of transitioning to patrol operations, she further explained, deputies have to successfully complete a five-month field training program.

“If they do not successfully complete the Field Training program, they are transferred back to custody operations,” she said in the email.

Asked about the department’s thoughts on the findings from the survey and the questions posed to the voters, Braun said it’s OCSD’s hope that the department and city maintain their working relationship.

Speaking with Corder, he said that rather than restart the local police department, the city should just up its contract to pay for more deputies, noting that the number of officers assigned to San Clemente hasn’t kept up with the town’s population growth over the past 30 years.

“What they (OCSD) need is for the city to give them the proper amount of deputies required to provide the necessary level of law enforcement here in San Clemente,” Corder said. “That’s what’s needed.”

The latest contract maintains the same staffing level as the previous fiscal year, which had seen a slight increase in staffing compared to FY 2018-2019, when there were 49 OCSD personnel stationed in town, 33 of whom were deputy sheriffs.

Because of the lack of staffing, he said, deputies stationed here are stretched thin while on patrol, making it harder for them to respond to non-emergency related calls.

“Well, what I’m seeing is the deputies are just so busy, they’re so busy that it makes it difficult to respond in a prompt fashion to non-emergency calls, to minor calls for service,” he said.

Touching on the subject of community engagement, Corder noted that there were more officers living in town during the days of the SCPD. Officers including himself had the time to meet with shop owners and get to know the community.

He acknowledged after the switch to OCSD, there was a higher turnover ratio of deputies stationed in San Clemente. But, he added, that’s because the sheriff’s department is able to provide more positions and opportunities for career advancement.

“So, they come to San Clemente, and they have advancement opportunities, promotions—that type of thing comes up,” he said. “They’re constantly being transferred from the city.”

As with SC Times’ previous reports on the survey, city officials had not responded to requests seeking comment as of press time.