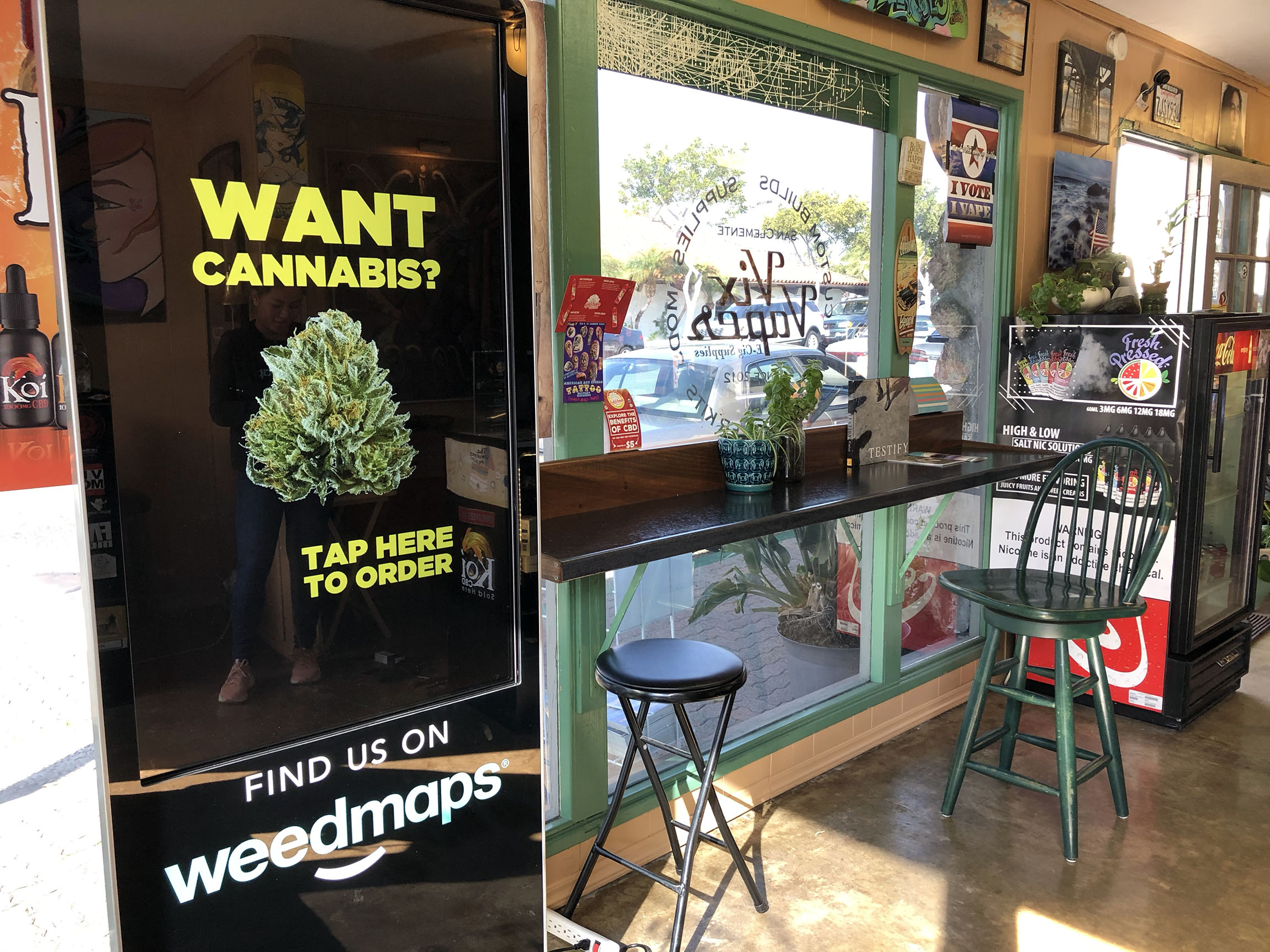 Pot Retailer Gets Around City’s Ban with Delivery Service

Marijuana shoppers in South County, who have had to travel to Santa Ana—the nearest licensed dispensary in the county—to purchase marijuana, can now walk into Vix Vapes on Avenida Del Mar, where they can place an order through a digital kiosk and, within minutes, get their items delivered to them outside the store.

How it works is, customers can walk into the vape shop, where they’re greeted by a representative of The Joint who walks them through their purchase. The Joint representative cards the individual, assists them with their order, collects the payment, either through cash or debit card, and after about five to seven minutes a van pulls up to deliver the products.

Chris Glew, The Joint’s director of legal affairs, stressed that the kiosk at Vix Vapes is not a storefront.

“I think the main problem is the mischaracterization of what it is,” he said. “Many have the perception that it’s a storefront. You kind of realize, there’s no cannabis inside the (smoke or vape) shop, it’s a mobile ordering tool.”

That mobile ordering tool, he added, was meant for marketing but has become an educational resource, letting consumers know that weed delivery services are legal in the state.

“Our goal was to educate consumers about the legal licensing in California,” Glew said. “In all of our feedback today, a lot of consumers just didn’t know (delivery services) existed. It’s easy and functional and I can get this delivered to my home.”

Courtney Vickery, the owner of Vix Vapes, which has been a San Clemente business for 11 years, explained that she simply rents out a portion of her space to The Joint, which provided its own employees and products.

“They’re paying me rent as a marketing partner, and in return I’m getting a lot of traffic with my vape stuff, too,” Vickery said.

The Joint currently has kiosks set up at similar smoke and vape shops in Anaheim, Costa Mesa, Huntington Beach and Newport Beach.

However, according to Glew, provisions in the state’s law establishing the Bureau of Cannabis Control authorize licensed retailers such as The Joint to offer delivery services even in municipalities that have banned storefronts.

“So what’s going on is you have a preemption argument,” he said. “The state law preempts local law.”

While Glew and the company believe they’re on solid legal footing, it’s unclear what the city’s stance is. City Manager James Makshanoff told San Clemente Times this week that while city staff is aware of the service and working with legal counsel, he’s not aware of anyone formally reaching out to Vix Vapes or The Joint to address any issues or concerns.

Glew said that The Joint wants to be good neighbors and set an example for legal operators, noting that many cities are still battling the illicit market, particularly against faith-based cannabis shops, or churches.

“It’s helping the consumer come back to the legal market,” he said, later adding: “We’re not trying to make enemies. . . . Even if we were only to break even on the enterprise, the city benefits.”

Vickery gushed to the SC Times about her partnership with The Joint, stating that it has been beneficial for her business in the wake of media reports on the negative health impacts of e-cigarettes and vaping.

Since news reports disrupted the vape industry, Vickery said, “I lost a lot of business, so I had to partner with someone or decide to shut it down. This definitely is bringing more traffic to the store. To have this available to the community is a positive thing.”

Sabrina Cervero, an onsite representative for The Joint at Vix Vapes, echoed Vickery’s statement. With South Orange County essentially being a cannabis desert, having no licensed retailers around, the kiosk and delivery service means locals and visitors searching for marijuana can spend their dollars in San Clemente.

“There’s not really much in South County; we’ve been getting a lot of people from San Diego, or people driving all the way from Santa Ana, there’s no stop for them,” she said. “Even people going to San Diego, they’re looking to get cannabis, and they look on Weedmaps.”

According to Glew, The Joint does intend to expand its kiosk and delivery service in San Clemente. However, Glew said the retailer doesn’t want to be an impediment to other businesses in town.

“We would like to create as much of an opportunity to educate the community as possible, with the understanding that we don’t want to have our business be an impediment to other businesses,” he said. “We have no problem working with the city to respect those boundaries.”