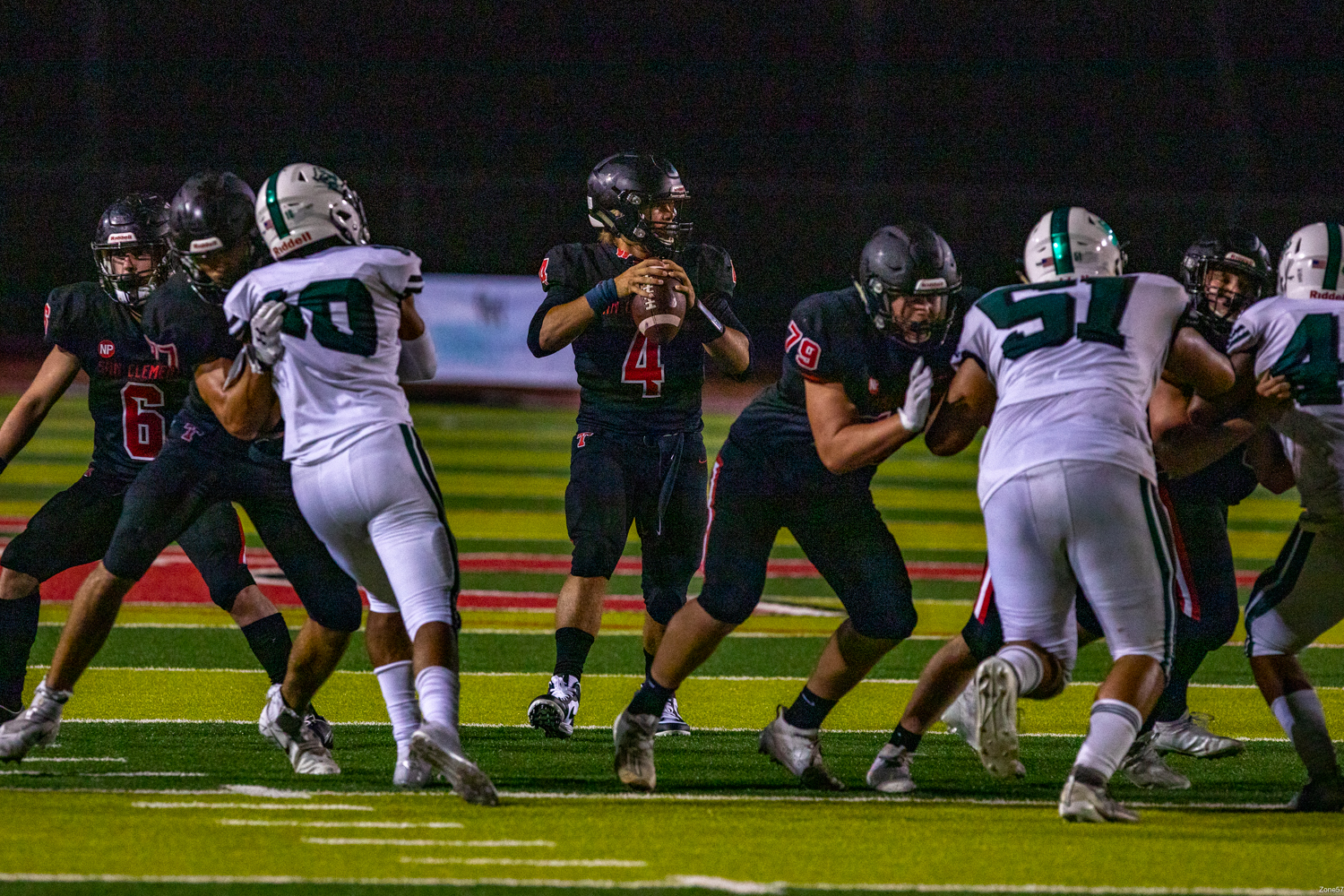 After winning its first three games of the season, the San Clemente football team hit a speed bump against Corona del Mar on Sept. 10 and followed that up by falling into a pothole against Edison on Friday, Sept. 17.

The Tritons took their first loss against Corona del Mar, 7-3, at home, and while the offense continued to struggle, the San Clemente defense had stepped up to its task to keep the Tritons within striking distance all game.

Unfortunately for San Clemente, the bottom fell out of the defense last week in a 42-0 loss to Edison at Huntington Beach High School.

That may not be fair to the San Clemente defense, because despite allowing four rushing touchdowns, the Tritons gave up only 93 rushing yards. In the passing game, Edison threw for 312 yards and one touchdown—not otherworldly numbers for a team that won by 42 points.

San Clemente’s defense has proven to be a strong unit all season, allowing only 26 points over the Tritons’ first four games. The defense will surely bounce back. The real problem against Edison was that the defense may have been overworked.

Not only was the San Clemente offense held out of the end zone for a second consecutive game, the Tritons failed to stay on the field with any lengthy drives and turned the ball over four times. San Clemente ran for only 43 yards and threw for 148 yards, with three interceptions and a fumble that was returned 97 yards for a touchdown.

Since scoring 34 points in their opener against Oceanside, the Tritons have scored only 31 points in their past four games, with their last touchdown scored in the final minute at La Costa Canyon three weeks ago. That last San Clemente touchdown was the go-ahead score and the Tritons’ only touchdown in a 13-6 win.

The San Clemente offensive production has dwindled as time has gone on. The Tritons scored five touchdowns against Oceanside, two against San Jacinto, one against La Costa Canyon, and now none against Corona del Mar and Edison.

San Clemente’s offensive game needs to get in gear quickly, as the Tritons have two more tune-up games before South Coast League play. The road doesn’t get any easier this week, as San Clemente hosts Murrieta Valley on Friday, Sept. 24.

Murrieta Valley is just 2-2, but the Nighthawks have put up plenty of points. In fact, Murrieta Valley’s last loss might be its most impressive game of the season.

Murrieta Valley scored 63 points in its opener against Apple Valley and another 46 points in its last win on Sept. 10 against Roosevelt of Eastvale, which beat San Juan Hills three weeks ago. Then last week, Murrieta Valley lost by just one point to Norco, 35-34. Norco is ranked No. 7 in California by calpreps.com and sports a win over Santa Margarita, 40-22.