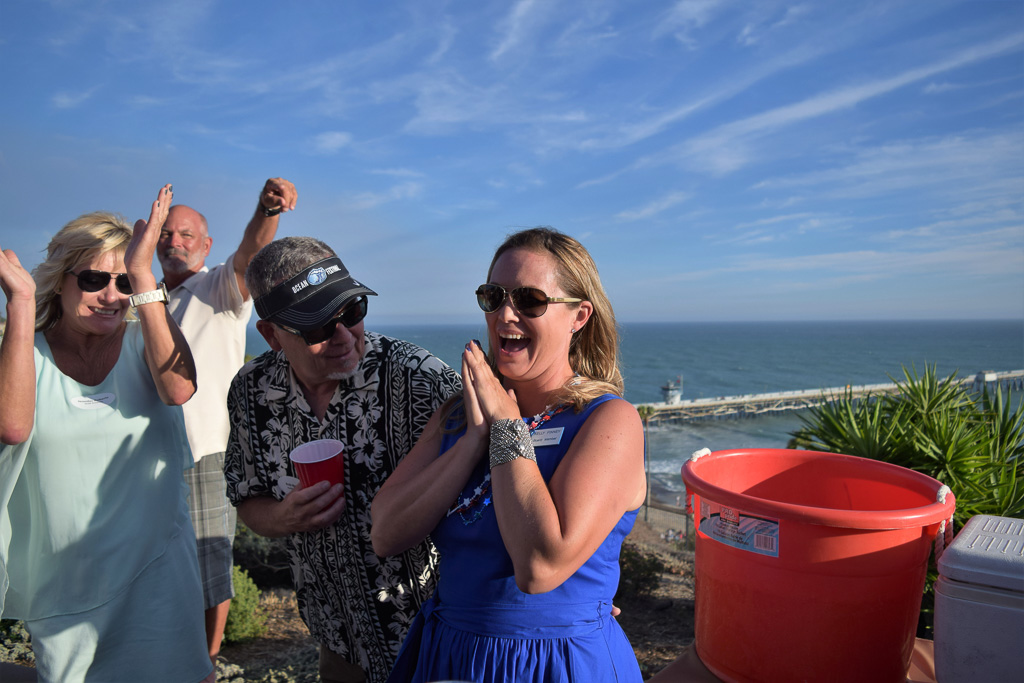 You can see her on the beach, roads, fields and other terrain wearing her trademark referee uniform at many San Clemente events.

Through her dedication to volunteerism and sunshine attitude, Kelly Finney was named the 2018 recipient of the Dorothy Fuller Award, which is given to someone who shows exceptional initiative to the preservation of Ocean Festival.

“For once, I think I might be speechless,” Finney said on July 5 at Casa Romantica, after her name was called at the sponsors dinner, which honors organizations that donate to Ocean Festival as well as the award recipient.

“I am flattered. I am honored. I feel like there are so many people that are better deserving of this,” Finney continued. “I love the Ocean Festival. I don’t think I’ll ever forget the Chamber (of Commerce) mixer where Peggy (Vance, the executive director of Ocean Festival) cornered me and asked me to volunteer. And I never left, but how could you leave this family? It’s a great family to be a part of, and I just love being part of it.”

Tod Bryant, the overseer of the famous Rubber Duck Races, gave the reasons they chose Finney for the award.

Kelley Finney holds the Dorothy Fuller Award on July 5 at Casa Romantica during a dinner for sponsors and recognitions. Photo: Eric Heinz

Kelley Finney reacts to being selected as the 2018 Dorothy Fuller Award, which is given to someone who shows exemplary commitment to Ocean Festival and volunteer work. Photo: Eric Heinz

“Our 2018 Dorothy Fuller Award recipient has worked fiendishly on athletic registration, implementing an electronic pre-registration aspect to the lifeguard and beach events, stand-up paddleboard and Groms Rule surf events and Dolphin Dash,” Bryant said, adding to a laundry list of accomplishments of Finney’s.

Finney also served as the Ocean Festival foundation’s board treasurer for the past three years and that she always “has a positive attitude and offers her assistance at first chance, which is the epitome of someone deserving of this award,” Bryant said.

At Ocean Festival’s Dorothy Fuller Award dinner, Vance said the Ocean Festival has been making healthy profits so far on its T-shirt and other merchandise sales, about $63,000 so far, and that number is expected to rise. Most of the funding for Ocean Festival is garnered through corporate sponsorships, donations and various other ways to fund the some-$124,000 (according to Ocean Festival’s 2017 IRS forms) it spends to host the event. Money is also collected from registration fees.
“This is a record year for us,” Vance said about the fundraising. “We have people out there selling products and we appreciate all the volunteers.”

Vance said there are 38 sponsors this year for the Ocean Festival.

The award is named after Dorothy Fuller, known as the mother of Ocean Festival, who organized events in San Clemente in 1977 with the local lifeguards. The festival had been sort of an unofficial gathering in the years before then. Fuller coined the phrase “The Greatest Show on Surf.”

2020 Green Issue: While Planting a Seed, They’re Sharing the Love