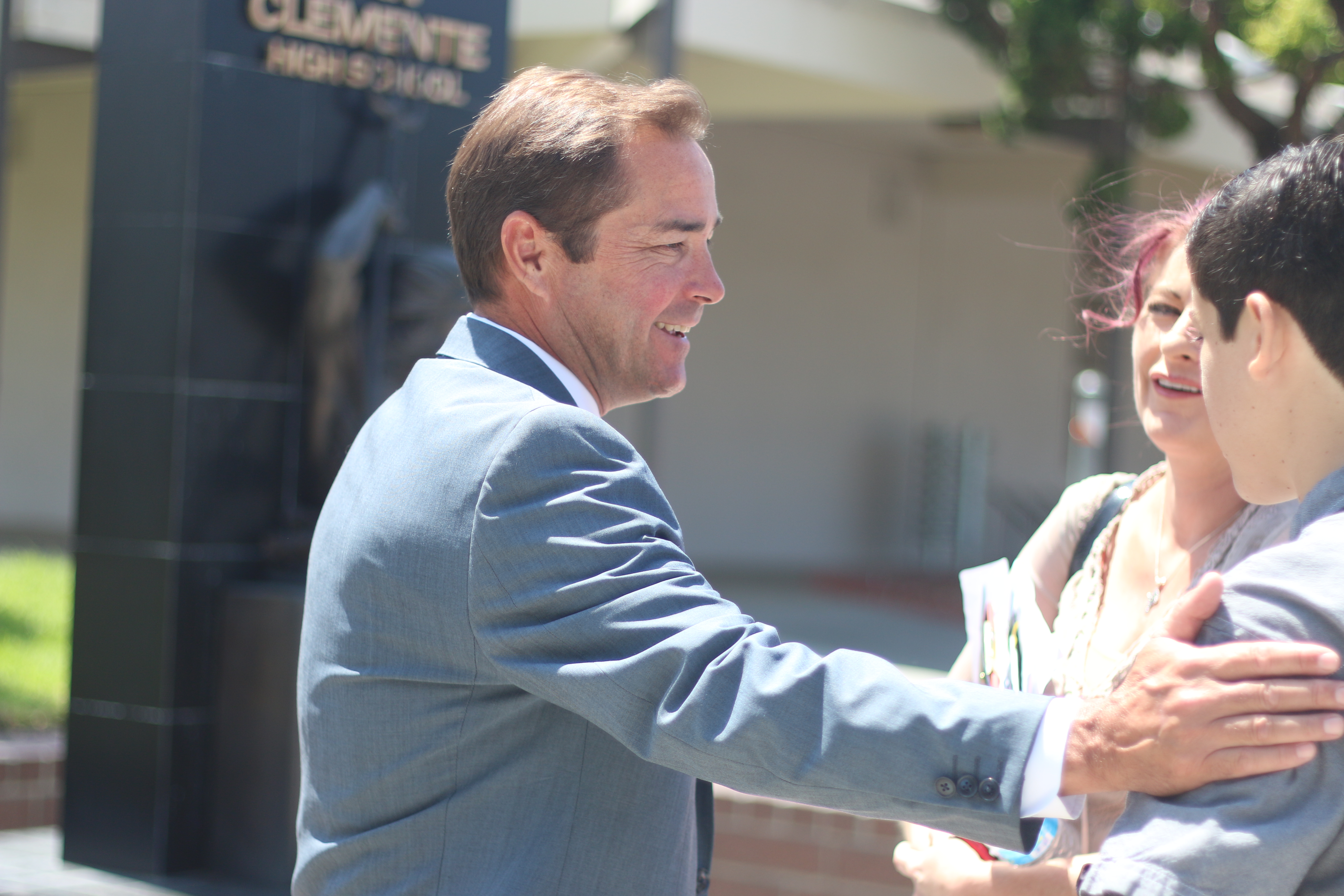 On Monday, the new principal of San Clemente High School stood at the gateway to registration booths on campus.

Smiling and shaking hands with young students passing by to initiate their first year of high school on Monday, freshman registration day, Chris Carter spoke with parents and students who had questions for him.

Carter said he was a “history buff” in college at San Diego State University, where he majored in history with an emphasis in teaching. After getting his degree, he explored the option of teaching but wasn’t sure if it was something he could parlay through history.

“I loved teaching but I constantly was being asked to take on other roles at the campus (at Shorecliffs Middle School),” Carter said. “It really wasn’t my goal to be an administrator—my goal was to be an activities director.”

John Alpay, District 3 trustee of Capistrano Unified School District, said he has confidence in Carter as the next principal of SCHS.

Coming in on the back of the dismissal of former principal Michael Halt, Carter said he doesn’t feel the pressure of filling the void of his popular successor.

“I’m proud of the accomplishments that I made at all the schools I’ve been at, and I think Mike did a great job here. Mike’s a good guy,” Carter said. “What I bring to this school is serious energy and I will pour it into this campus. I’m happy to be here and I think the community will get behind me as well and we’ll work as a team to make sure it’s the best it can be.”

Although Carter was appointed to and did not apply for the position, he said he is excited to get started in the new environment.

“It was one of those situations where the district had called and asked if I would entertain the change,” Carter said. “I was happy at Aliso Niguel, but I like to work closely with my district.”

Carter has been a resident of San Clemente since 1996.

“I love being a leader among a bunch of other leaders,” Carter said. “I love the collaborative atmosphere and working for continual improvement—how we can make this better, how we can constantly improve on something.”

Carter said he hasn’t had a lot of time to meet with a majority of the students and teachers but intends to make time to make sure people know him.

“I will try to get out to as many (sporting events) as much as I can,” he said. “I’ll try to get to the band and orchestra performances, all the plays and be visible at lunch and walk through the classrooms. You’ll see my car out here quite a bit.”

Since Day 1, Carter said he has been working with his team of educators to get the school year off to a good start.

“My goal was to go out and build the strongest administrative team that I could, and this is the first year in a while where we’re starting with a new activities director. I brought in a new upper campus administrator. We were able to keep Brad Baker (as an assistant principal),” Carter said. “We have some of the most phenomenal teachers in the district on this campus. My goal is to tap into that expertise and use those experts to spread incredible instructional strategies across the board. Within our collaborative program, we want to make sure we have common assessments across the board and have common expectations.”

Working with his leadership team, the staff and administration at SCHS, Carter said he intends to reach students at all levels of the school.

“We will establish three goals: academic achievement, collaboration and leadership,” Carter said. “We also want to sustain a positive campus culture and communication. One of our goals in academics is to ensure there’s student involvement and engagement in the classroom. I really want to see kids involved in their learning every day.”

In order to achieve this, Carter said he wants to see students excited and participating in discussions outside the classroom about the topics they’ve learned.

He also said he would like to see teachers continue to engage with each other across disciplines.

“We will try to infuse walkabouts for teachers where they can feel comfortable for other teachers to walk by and see what’s happening in their classrooms,” Carter said.

Bringing students together to be engaged with SCHS also includes getting them involved with the campus culture, such as extracurricular activities and leadership opportunities.

“We’ve got a phenomenal athletic program and performing arts program—those are already here so we will continue to encourage kids to be involved,” Carter said. “We also need to make sure that all students have access to a variety of programs that meet their interests.”

Socioeconomically, SCHS probably has one of the most diverse campuses in the district, Carter said.

“We need to make sure kids have access … to being able to participate in any activity they want to,” Carter said. “I think having a variety of activities to meet the interests of our students is very important.”

Many students remember enduring a series of bomb threats in the last few years. In order to ensure the safety and peace of mind for students, Carter said support efforts will continue to increase as they become available.

“When it comes to those types of situations, we have a very strong support system built within our district,” Carter said. “We’ve increased the campus supervision over the years, and as finances continue to come back to the district we will continue to add to our classified staff as well as our administrative staff and counseling staff.”

A new counselor and more academic advisers have been added to the staff, Carter said. There is also a student resource officer from the Orange County Sheriff’s Department on campus.