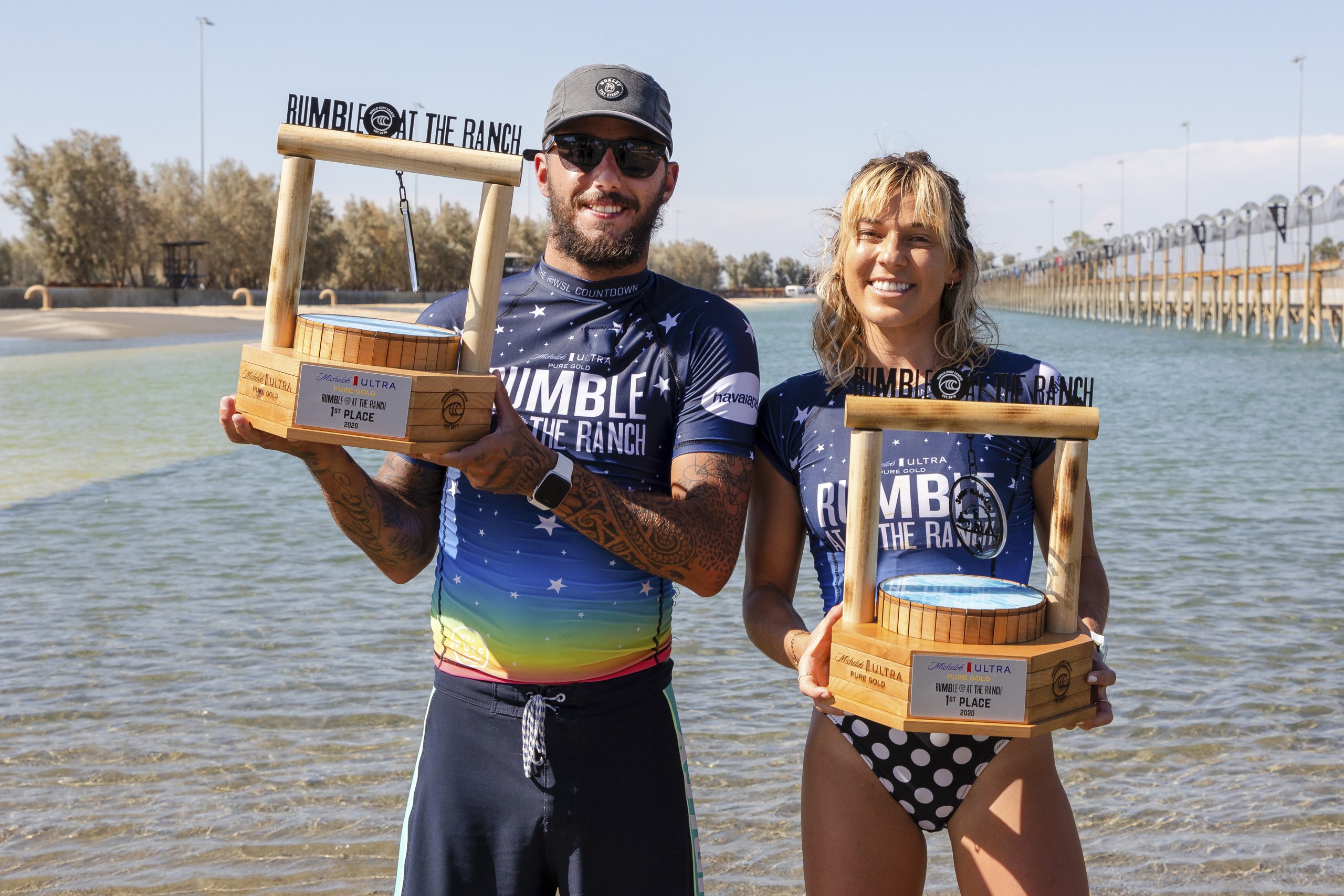 It had been more than six months since any form of live professional surfing had taken place, but it made its return last weekend with the Rumble at the Ranch.

Featuring a unique mixed doubles team format showcasing some of the WSL Championship Tour’s top surfers—and good number of them from our sweet little South Orange County bubble—it was San Clemente’s Filipe Toledo and teammate Coco Ho taking the win at the Surf Ranch in Lemoore.

Over the years, Toledo, who relocated his family from Brazil to San Clemente to be closer to Trestles and the surf industry, has asserted himself as the premier small-wave surfer in the world.

Nobody goes faster and higher than he does, and if you’ve seen him out at T-Street training over the past few months, you know what I’m talking about. He’s also one of the best surfers at the mechanical wonder that is the Surf Ranch.

The lineup for the event was stacked. Local heroes Kolohe Andino and Griffin Colapinto were among the headliners, as were San Clemente transplants Caroline Marks and Adriano de Souza—and, of course, Toledo.

Kelly Slater, the 11-time World Champ who helped mastermind the Central California wave pool, continued to show the world that he’s as relevant as ever—even if he was on an NSSA National team with Jim Pinkerton, father of rising San Clemente star Kirra Pinkerton, way back in 1986.

Kirra Pinkerton and Encinitas’s Alyssa Spencer also got invites to the event and were the youngest to dip a toe in the pool.

There was clearly some rust among the surfers, and many of them stumbled on their opening rides. It wasn’t until the final that Toledo was able to actually complete a ride on the right, and when he did, it certainly didn’t disappoint.

Lofting two alley-oops on his final right of the day, he threw down a 9.67 for the best score of the entire event.

“My last chance, my last wave, and I did it,” said Toledo. “And I have to thank Coco; she was amazing!”

Last month, the Ho family suffered the loss of 1993 World Champion Derek Ho. At 55 years old, he was coming off another epic winter on the North Shore when he suffered a heart attack. He was the first Hawaiian World Champion and nephew to musical entertainer Don Ho. Before competition got underway at the Surf Ranch, a tribute was held in Derek’s honor.

“It was surreal to watch that beautiful empty left and imagine and celebrate Uncle Derek; it was awesome,” said Ho after winning the event. “I’m very thankful to everyone for making it happen.”

Because it was a charity event, $10,000 was donated to the Surfrider Foundation in the names of Toledo and Ho.

The Rumble at the Ranch was the first installment of what’s been dubbed the WSL Countdown Series. For fans of pro surfing who just can’t wait for its return, there will be a handful of other specialty events around the world during the rest of the year.

Because international travel is restricted at the moment, only athletes from each specific region are being invited to participate. There are a pair of events scheduled for Australia this fall, as well as a couple of contests on tap for France and Portugal.

After a series of sweeping changes to the Championship Tour and Qualifying Series, because of prior permitting commitments, the WSL is looking to kick off its 2021 season in Hawaii in November and December.

We’re still a long way from anything that looks like “normal” pro surfing, but the Rumble at the Ranch was a positive step in the right direction.

It’s not as if they could have held it at Lowers, even if it had been allowed, as the ocean’s been flat here for weeks. The Surf Ranch offered a world-class wave (on demand, no less) in a controlled environment that was safe for both the surfers and the fans.

Eventually, we’ll get back to the business of crowning world champs and cheering for our favorite surfers, but I don’t have to tell you that 2020’s been kind of weird.