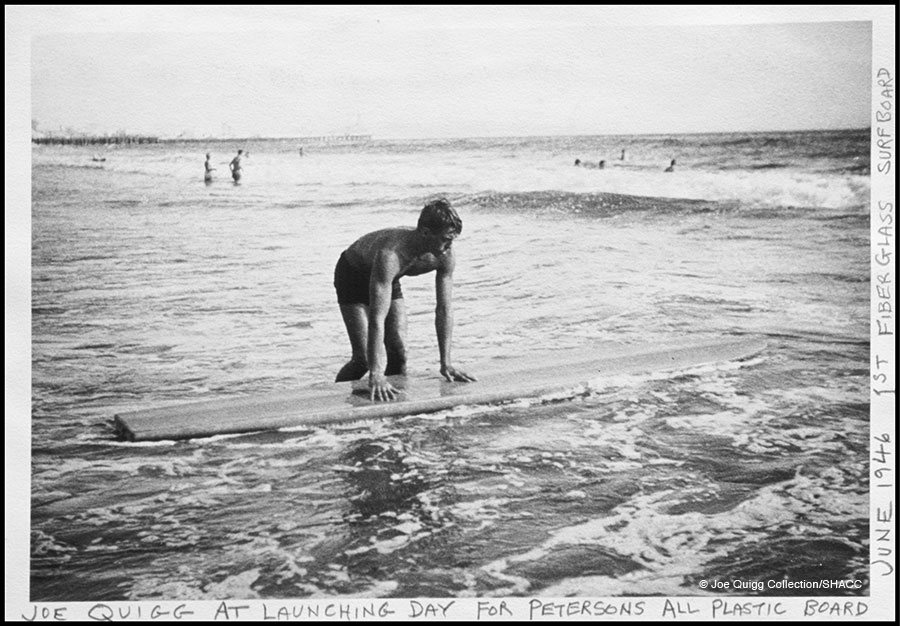 From Earliest Days of Fiberglass to High-Flyers of Today, Limits Were Meant to Be Pushed

Johnny Cash used to say, “Sometimes, I gotta look back at where I’ve been, so I know where I’m going.”

The sentiment certainly applies to surfing, as one generation builds on the accomplishments of those who came before them. In June of 1946, Pete Peterson handed off the first-ever fiberglass surfboard to Joe Quigg, who took it for a paddle and made history.

It didn’t take long for Hobie Alter to come along and perfect the foam and fiberglass combination, pushing things further down the tracks.

Lighter in weight, more sensitive in the water, foam and fiberglass revolutionized what was possible on a surfboard. From the golden era of “hot doggin’ ” in the ’60s to the experimentation of the “Shortboard Revolution” in the ’70s, each successive era seemingly just got better and better.

“It was during the summer, either 1982 or ’83, I must have been about 10 or 11 years old, I was surfing T-Street with my good friend Dan Kennedy. The waves were fun, the sun was out, and I was totally oblivious to the fact that my perception of surfing was about to change forever,” remembers Shane Beschen.

“I was paddling back out after catching a wave, and this guy on a ‘fluro’ green and yellow board was absolutely flying right at me,” he continues. “I started paddling faster to get out of his way, but he was moving at a speed I’d never seen. He then whipped the most radical backside 360 right in my face. Spray flew everywhere, I was momentarily blinded, left wondering if he had fallen. When I turned my head to see the outcome, he was already down the line and into his next move.”

Getting a glimpse of the future, Beschen had just witnessed the aggression and artistry of Martin Potter.

Hailing from South Africa, for a period during the apartheid regime, “Pottz” was a man without a country. He surfed on the ASP World Tour under the English flag, but with his sponsor, Gotcha, headquartered in Orange County, as well as all the big surf magazines of the day in the area, he spent plenty of time in Orange County.

“That moment changed the course of San Clemente’s surfing history forever,” Beschen says. “It’s been repeated over and over by Matt Archbold, Dino Andino and Christian Fletcher that Potter drastically and positively charged the San Clemente surfing movement.”

“As far as I’m concerned, Potter is the godfather of progressive surfing, and he can basically take credit for all of the surfing success that has come from San Clemente,” Beschen continues. “When he first started coming to our town, he ignited a revolution like never before. A new standard of performance was laid out before us in real life; it was a tangible skill that we studied and used as our guideline for what surfing is all about. The speed and radicalness of his approach inspired us all.”

Guys such as Kolohe Andino, Ian Crane and Griffin Colapinto are a product of this lineage. Beschen inspired them, just like Pottz inspired him. And today’s groms are following the lead of Andino and friends. When we talk about this area being a hotbed for surf talent in the United States, it’s important to remember it didn’t just happen overnight. It took generations.

“For myself, those days of Potter ripping San Clemente molded my perception of what good surfing is and how I would approach my technique and career,” Beschen adds. “I remember times when I was at the school lunch tables and kids would be talking about Potter surfing T-Street, and I would run down there right after school, hoping to see that green and yellow board flying through my local beach break.”