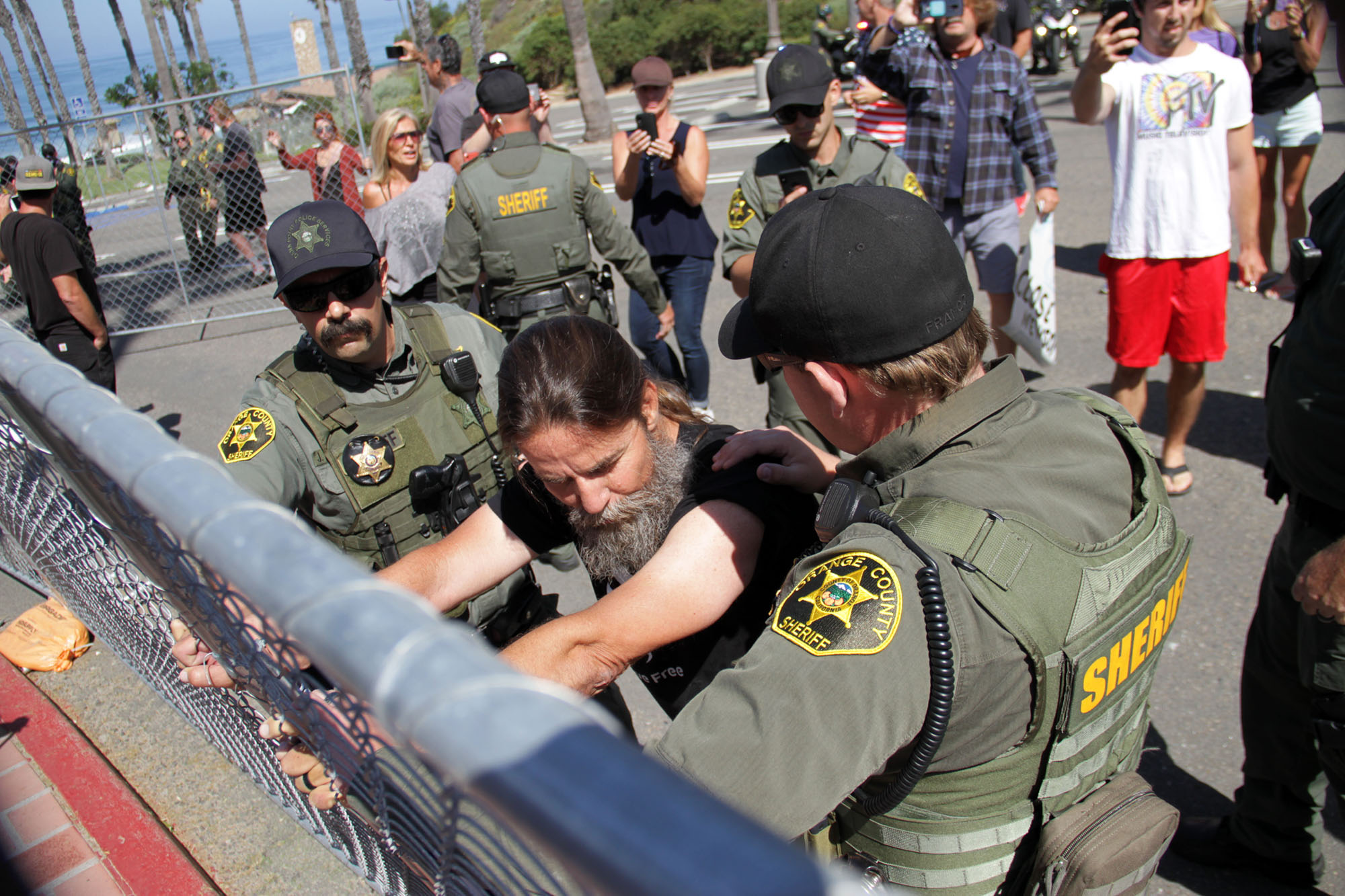 Multiple individuals were arrested at the Pier Bowl parking lot after a protest against the chain-link fencing used to deter visitors from overcrowding the beach escalated on Thursday, May 21, when demonstrators stormed the fencing and others refused to disperse.

Among the handful of demonstrators taken into custody was Alan Hostetter, the organizer of the protest that drew about 200 to 300 people who had gathered at the Pier Bowl area to help him tear down the fence enclosing the parking lot.

“These fences that we’re about to take apart came about as a part of that doubling down on stupidity amongst our fearless governmental leaders,” Hostetter told the crowd moments before several of them hopped over the fencing and began using tools to undo the locks.

According to Capt. Jeff Puckett with the Orange County Sheriff’s Department, who spoke with media following the protest, about five people were arrested and are likely to face misdemeanor charges for trespassing and vandalism.

“Of course, the Orange County Sheriff’s Department firmly respects the Constitutional rights of anyone to come down and protest. Unfortunately, today we had a number of people committing acts above and beyond social distancing, which the Sheriff’s Department is taking an educational approach on,” Puckett said. “So the citizens that came down today chose to commit acts of violence and trespassing, which forced our hand to make some arrests.”

After storming the lot, deputies approached those protesters including Hostetter who had taken hold of one of the fences. With his hands clinging to the fence, officers held Hostetter’s arms in place while a horde of demonstrators on the other side shouted to the deputies to let him go.

Hostetter remained in place for more than an hour while the bulk of the protesters crowded the sidewalk in front of him for support, as well to chant and continue berating the officers.

“So what we would see in a typical passive resistance-type stance is somebody that is in violation of law but is not actively fighting deputies,” Puckett explained. “In this particular situation, we were fortunate to both follow law and policy in terms of effecting that arrest, which led to the individual being taken into custody, again, with no injuries or use of force.”

Before Hostetter was removed, the situation escalated when deputies declared that the protesters were engaging in an unlawful assembly and ordered them to disperse, giving them five minutes to do so before arrests would be made.

“At this point, they are blocking the public sidewalk, so that is the reason for asking them to move their assembly back to the free speech area,” OCSD spokesperson Carrie Braun said, referring to a patch of grass near the train tracks.

The city has kept its beachside parking lots closed throughout the public health crisis as part of an effort to limit visitation and prevent overcrowding, in turn trying to stem the spread of coronavirus.

Barricades were initially used at the Pier Bowl parking lot, but it wasn’t until recently that the city put up the fencing. Interim City Manager Robert Dunek explained to the city council on Tuesday, May 19, that the fencing was being used because motorists had been moving the barricade and parking in the lot, prompting the cars to be towed.

Acting Mayor Laura Ferguson and Councilmember Gene James proposed that the city take down the fencing and reopen the parking lots. The proposal died in a 2-2 vote, with Councilmembers Chris Hamm and Kathy Ward opposed.

Hostetter, a former police officer who has organized a series of protests in San Clemente since Gov. Gavin Newsom issued his stay-at-home order, has taken issue with the state’s social distancing restrictions, believing them to be unconstitutional.

The fencing had since drawn the attention of Hostetter, who on Thursday morning called it a “symbol of tyranny.”

“That parking lot was already shut down, and it was shut down with small barricades and much less offensive equipment to block the parking lot,” he said before noting that the previous marches up Avenida Del Mar on Sundays had started from the Pier Bowl parking lot. “Those fences went up after our protest drew about a thousand people.”

A string of sheriff’s deputies were already standing by the fence before the protest began. Hostetter had acknowledged that the Sheriff’s Department was going to do what they needed to do.

“If they arrest me, I’m going with them,” he said just before marching up Del Mar toward the fence.

Councilmember James arrived to the rally as Hostetter continued to hold the fence. Hostetter had spoken highly of the freshman councilmember, as well as Ferguson, for their advocating of reopening the parking lots for beachside access.

“For the last two weeks I’ve been trying to have this fence taken down,” James told San Clemente Times after the deputies drove the protesters down to the free speech area.

“When you look at this fence, it’s not a truly secure fence; you can walk around and get inside it . . . it served no purpose other than being unsightly,” James said, before stating that the barricades would suffice in restricting motorists from parking there.

He said that while he’s in favor of reopening the lot altogether, he was willing to compromise by taking down the fence and bringing back the barricades. He said the whole ordeal with the arrests could easily have been avoided had the fencing been taken down this week.

As of this posting, OCSD did not have a firm number on how many people were arrested and could not provide the identities of those who were taken into custody, nor the official charges they are facing.