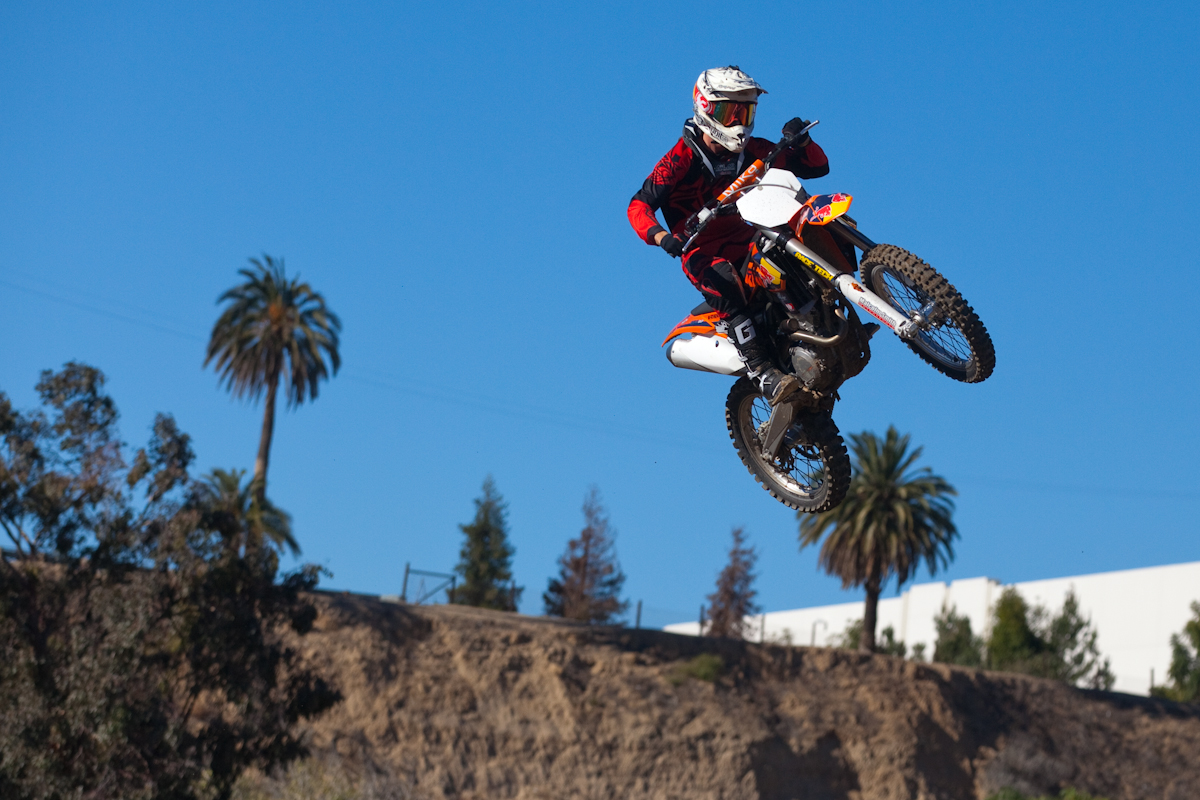 Brian Burns has been riding dirt bikes since the age of 10. He’s suffered broken bones and broken bikes. He’s had plenty of wins but also plenty of disappointing losses. But all of those ups and downs have been a result of his one, constant pursuit in becoming a professional racer.

That’s why January 4 will be a date that Burns, 20, will always remember.

Under the bright lights of Anaheim Stadium, he will attempt to qualify for his first professional American Motorcyclist Association Supercross event.

Burns has spent the last year touring the country on the AMA Arenacross circuit, attempting to accrue enough points to qualify for his professional Supercross license. Long cross-country treks to small towns across America became his life, and now Burns is stepping into the big time. After earning his professional license he was offered a spot on Rockwell Fire Police MX, a pro racing team.

The San Clemente Times caught up with Burns just days before his big qualifying race in Anaheim to talk about his journey, what he expects in the coming months and what it means to see his dreams become reality.

San Clemente Times: It seems like you have been really busy this year, what has the experience been like? You’ve covered a lot of ground.

Brian Burns: Yes, definitely. I was in a different city every weekend. I don’t remember all of them, it was all just blended together so much. I was in Tulsa, Wichita, Kansas City … every weekend was a different place. The Arenacross circuit was a good way to get a foot in the door, get points and good experience.

SCT: All that time and travel paid off when you got picked up by a pro racing team. What has that done for your career?

BB: It helps out so much, especially with this being my first year. In Supercross there are a lot of little tricks that people, even at my level, don’t realize until you get there. Being on a team helps me know what’s going on. They help with things like having exact tire pressures and tire types. It’s all so precise. So they’ve been helping with a lot of those things, which is cool.

SCT: You decided to try and become a pro right out of high school. How hard was it to get to the point you’re at now?

BB: Trying to do that is tough when you don’t have money to start out with. You can’t really just go from nothing, get a dirt bike, and magically race and make money. I’m at that stage where I’m not making money but I’m at that point where I can start. I’ve put every dollar I’ve ever had into racing. Every extra minute I had, I would go train, go to the gym, the track and remember to eat healthy. A lot of things go into motocross that people don’t realize. A lot of people think you just twist the throttle and go. It’s been really hard. With that said, it led me into the summer. When summer came along, I didn’t qualify for a few things and didn’t ride the way I wanted to. I was sick, tired and beat up so I decided to take some time off. I wanted to quit and I did for a few months. But once I did get back into it, I knew I missed it and didn’t want to give up on something I’d trained so hard for.

SCT: What’s the biggest difference between Arenacross and Supercross?

BB: In Supercross there is a bigger population, and it’s all over the USA. There are also riders from all over the world and they’re the fastest racers. The competition is definitely stiffer. Everyone’s more professional and it’s definitely a more spectacular event. It’s as big as it gets.

SCT: So are you nervous for Saturday’s qualifying heats?

BB: I’m super nervous. I’m nervous just talking to you (laughs). But I’ll have a lot of my family and friends coming out … I don’t know if I’ll even qualify. I have to get top-40 (out of 80 competitors). Thankfully I’ve been training a lot and picked up a lot of speed. I feel pretty good about it, but it’s still very hard to do.