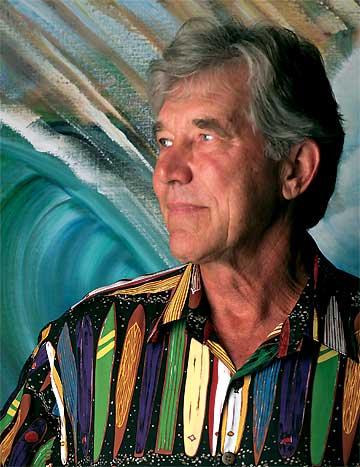 John Severson landed in San Clemente at the age of 12 and spent his formative years immersed in beach and surf culture. As the years went by, he became a regular at all the local spots, picking up the tricks of the surfing trade from lifeguards and scrounging up enough money to pursue his many passions.

Severson would go on to become an influential filmmaker, author, photographer and painter, responsible for not only some iconic surf images, but for founding SURFER magazine. His artwork and photographs have appeared in many popular outlets, including Sports Illustrated and Life magazine.

His films, “Surfing Safari”, “Big Wednesday” and “Pacific Vibrations”, to name a few, helped revolutionize the way surf culture was presented on screen.

Severson was also an accomplished big wave surfer and his latest book, “Surf”, chronicles his journey through surf’s golden age.

We caught up with Severson, who lives in Hawaii, via email to reflect on his storied career, what San Clemente surf culture was like in the ‘60s and talk about his inspirations throughout such a prolific, artistic life.

SAN CLEMENTE TIMES: You were born and raised in Pasadena and moved to San Clemente when you were still young. What were your fist impressions of San Clemente back then?

JOHN SEVERSON: I had just turned 12. I was not very impressed with San Clemente, as it drizzled every day for our first two weeks and thousands of Marines roamed the streets, just out of the war, waiting for the next bus home. But the sweet little town grew on me, attaining full glory by my first summer as a pier gremmie.

SCT: What was surf culture like in San Clemente back when you first got into it?

JS: The surf culture basically passed by SC on the way to San Onofre. A few of the guys slept down by the State Park in “the Hole.” We learned about surfing from the lifeguards. There was a staff of about four in 1946. They covered the Pier, Trafalgar Overpass and Doheny. (Lifeguard) Dave Tansey had a water-soaked balsa/redwood that weighed in the neighborhood of 100 pounds and he would let us ride it, or at least try to. Most of us couldn’t lift it.

Throughout the summer we bodysurfed, rode mats and played volleyball, soaking up surf stories and hitch-hiking occasional rides to ‘Nofre. We strummed our ukes at the beach parties and wooed the visiting State Park sweeties.

SCT: You are obviously a very creative guy. At what point did you decide you wanted to devote yourself to the surf arts and why?

JS: In my book (“Surf”), I tell about the lecture from my Dad. Basically, (he said) ‘Look out for that beach life or you’ll end up living in a shack and just fishing and surfing.’ ‘Whoo-man’, I thought, that’s just what I want to do. I figured I could continue my art and sell a few paintings to support the shack life.

About that time I grabbed my mom’s throw-away Brownie and started my surf photography career. Then Bob Miller traded me out of my trumpet for a 16-mm movie camera and another dazzling hobby was launched.

SCT: You started SURFER magazine. What was the catalyst for that? Did you feel there was a lack of surfers being represented in the mainstream at the time?

JS: Mainstream media hardly noticed us. Surfing got more coverage on pineapple cans than in the press. And I certainly wasn’t trying to get even with the press. I had advanced to surf films and was more interested in creating an homage to surfing—a celebration of the fun of it and the thrill of big wave riding. I thought it might stoke the interest in my next film, at least.

SCT: Right, but it seemed like the majority of what was being represented as surf culture at the time was “Beach Boys”-centric and then other things, like your movies and SURFER, started popping up shining a different light on it. Was that at least a part of the initial goal you set out to achieve?

JS: My motivation was to pay for the lifestyle and surf, like most of the guys in the early surf biz. We were not crusaders and not very interested in “growing the sport.” We were not particularly thrilled with Hollywood’s portrayal of surfing in the Gidget and Beach Blanket films, nor the corny Beach Boys stuff. We didn’t aim to get it right. We just knew what was happening and how to portray it for us. Of course, we lampooned the mainstream media.

SCT: Surf media, like all sports media, has grown into such a juggernaut now, with constant news updates and the sharing of images. Do you feel the state of surf media is in a good place right now?

JS: I don’t pay enough attention to be considered an authority. The depiction of surfing is certainly dazzling and understandably, surf spot names are often withheld. At times it seems so far from the old days of sharing waves … ‘You take this one.’

SCT: What is it about surf and surf culture that lends itself to being so powerful on film and in photographs?

JS: Surfing certainly lends itself to graphic portrayal, and it continues to look fresh. We don’t do it on asphalt, we don’t bogie waves and it’s so beautiful. For a few brief moments, we’re in a wonderful harmony with nature. We glide and carve on and in the magic of wave. It glistens all around us, and we’re suckers for sparkle.

SCT: How does it feel to be inducted into the San Clemente Sports Hall of Fame where you join other legendary surf icons?

JS: I feel appreciated for exactly the reasons a few early citizens might have wanted to throw me out of town: ‘Throw the surf bums out.’ We always knew we were just seeing what was right in our front yard, appreciating it and played in it. We were stoked. I’m related to another Hall of Famer (niece’s daughter’s husband), Karch Kiraly. That’s big league company.