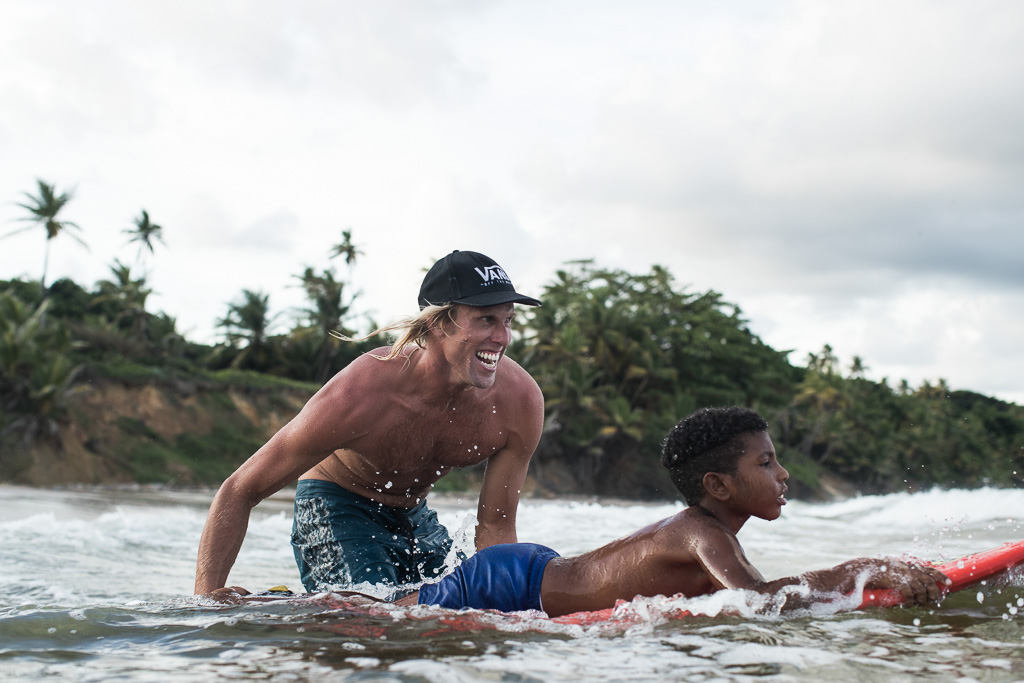 Reason to Be Thankful—Caribbean Style

Positive Vibe Warriors raise over 200 surfboards for Trinidad and Tobago

Keeping the vibes alive as we roll into the holiday season, Dane and Tanner Gudauskas recently returned from their latest mission to deliver surfboards to people who can’t afford quality boards.

Over the summer, the brothers were able to raise more than 200 surfboards through their Positive Vibe Warrior Foundation (PVW). In the past, they’ve done board drives for Jamaica and South Africa. This time around, their eyes were set on the Caribbean islands of Trinidad and Tobago.

Teaming up with Trinidad surfer Chris Dennis, their efforts resulted in what’s being heralded as the biggest donation of sporting equipment in the country’s history.

Dennis grew up in a rural, relatively forgotten corner of Trinidad. Living a subsistence life of farming and fishing, his family lacked the means to acquire a board for Dennis—or even an old surf mag. He spent years reading about Duke Kahanamoku and other surfers in a few old encyclopedias.

“I was attacked by a shark before I became a surfer,” Dennis said during a recent interview about the PVW surfboard drive. “For my family, the ocean was a place to get food; that’s it. When I was very young, I was already spearfishing and rock-fishing.”

His first board came when a storm hit the island.

“It blew down a tree, and there was this big splinter that sort of looked like a surfboard,” Dennis said.

Armed with only a machete, he hacked the “blank” out of the tree and crafted a crude board.

“I don’t even know how big it was,” he said. “It didn’t have fins. But I finally had a surfboard.”

Dennis embraced the journey to become a surfer wholeheartedly. Overcoming the odds, he was able to pick up sponsorships and at one point climbed to 144th on the WSL’s Qualifying Series.

Today, Dennis dedicates his time and resources to helping Trinidad and Tobago’s next generation get into the ocean.

“He is the man. He’s an absolutely incredible person, and we are so lucky to have linked up with him,” Dane Gudauskas said after returning from Trinidad.

“I hope they don’t think I was crazy, but I had a notebook with every kid’s name, age, height and weight and what surfboard they were going to get,” Dennis said, laughing. “I knew exactly who was getting what board and why they deserved to get their very own board.”

Like previous PVW board drives, Dennis will use this windfall to help kids learn to surf as well as how to deal with social issues, including poverty, drugs, crime and domestic abuse. He’s been reading and learning more about how to counsel children lately.

“This is our third board drive, and each one is special, but this was really unique because this area gets so little attention. It’s forgotten about,” Dane said. “We were told that this was the biggest donation of sporting equipment in the country’s history.”

As a result of the board drive, Dennis has been connected with a South African organization called “Waves For Change.” Helping disenfranchised youth in some of the poorest communities in the country, it was one of the beneficiaries of the PVW’s “Can’t Steal Our Vibe” board drive last year. In February, the group will fly Dennis from Trinidad to South Africa to work and train with them, so he can experience how their organization works and how they’re using surfing to heal their nation.

“It’s so powerful. It’s more than surfboards. It’s a lot more,” Dane said, marveling at the mission. “It’s building these surf communities in ways that are so profound.”

Vans has produced a film about the PVW’s South Africa board drive that was just released worldwide on iTunes. All proceeds will go to Waves For Change.

And true to Gudauskas form, they have more positivity and inspiration on tap. Vans is also going to be working on a video project that will document the journey of a few of the surfboards from the Trinidad board drive. They will tell the story of the people who previously owned the boards and how they’ve affected the lives of the kids who received them.

For the next month, Dane, Patrick and Tanner Gudauskas will be hunkered down on the Hawaiian island of Oahu for the annual Triple Crown of Surfing. No doubt they’ll also be passing along the positivity while they’re there, too.

New Shaper on the Block