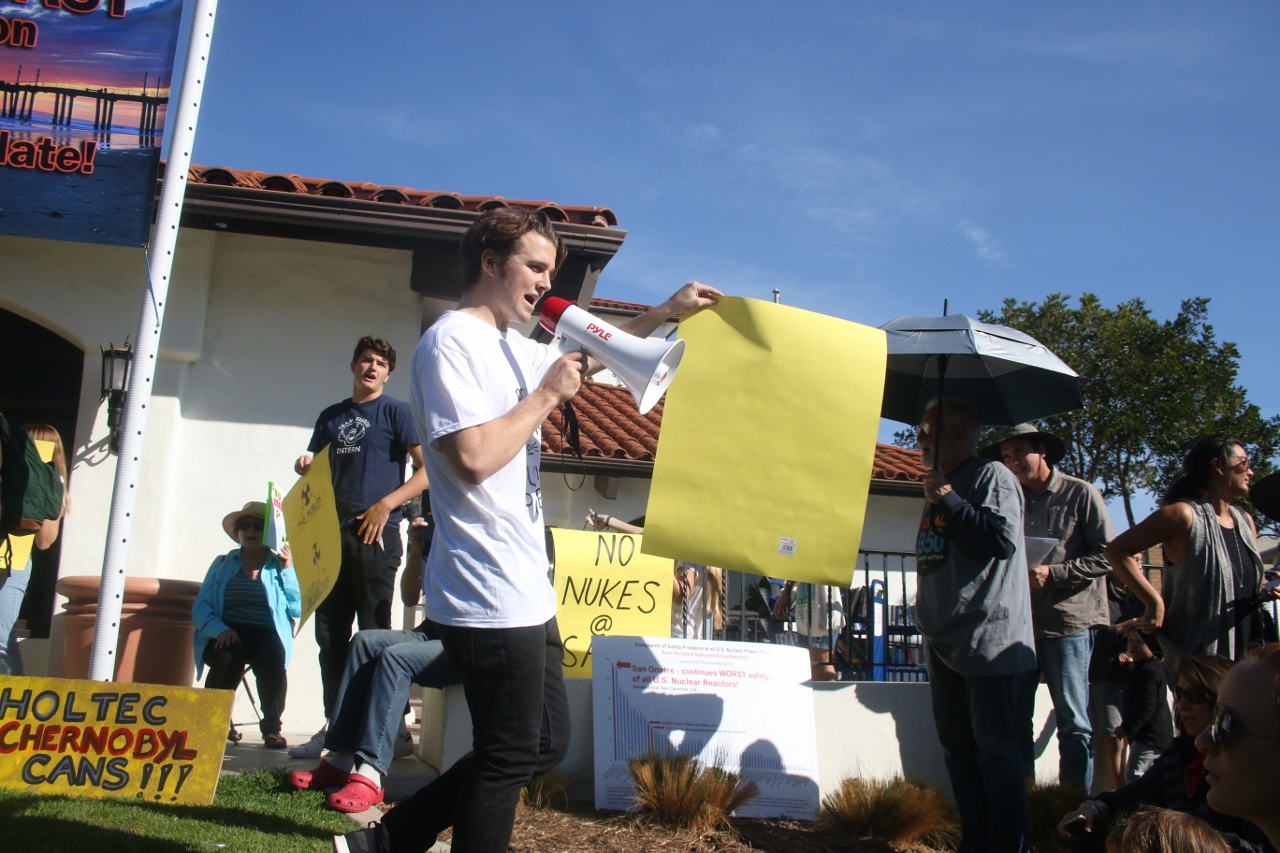 Operators of San Onofre Nuclear Generating Station (SONGS) will soon initiate the process of moving the power plant’s remaining spent nuclear fuel rods from the facility’s cooling tanks to on-site storage facilities, which has incensed activists in the area and compelled them to continue their fight against the action.

A couple hundred people flooded the lawn of the San Clemente Community Center the morning of Dec. 30 to voice their opposition of the storage, which is expected to take place in January.

The protest was hosted by Public Watchdogs, an activist organization based in La Mesa, as well as Team Zissou, a San Clemente High School club that engages publicly in environmental issues.

Signs imploring the cessation of storing more spent nuclear fuel at SONGS were posted at the Community Center and held by participants. Charles Langley, the executive director of Public Watchdogs, donned a yellow radiation protection jumpsuit with a gas mask to symbolize his organization’s opposition to the storage.

Nina Babiarz, a board member of Public Watchdogs, said a lawsuit filed by her organization in federal court on Nov. 14 against the storage is going through a 60-day review by the judge assigned to the case. A decision as to whether the lawsuit will go to trial or not is expected to be rendered by mid-January, Babiarz said.

About 3.6 million pounds of the radioactive fuel rods that activated power when the plant was online are to be stored in 73 stainless steel containers five-eighths of an inch thick, which were made by Holtec International. SONGS already has 51 dry-storage containers constructed by AREVA Nuclear Materials on-site that are in horizontal cement blocks and contain spent nuclear fuel rods. SONGS officials announced the power plant would be permanently closed in 2013 after steam generators cracked and leaked a small amount of radiation, causing an emergency shutdown in 2012.

At the protest, San Clemente City Council member Lori Donchak said people should write to Sen. Kamala Harris, D-CA, to compel her to visit SONGS to understand the gravity of the situation.

“We haven’t had a senatorial visit since 2012 with the Blue Ribbon Commission,” Donchak said. “Dry-cask storage is being contemplated in an area with 8 million people who live there. We are a tsunami hazard, we are a fire hazard, we are an earthquake hazard.”

The hazards Donchak mentioned are viewed by locals as a threat to the storage of the fuel rods just a couple hundred feet from the Pacific Ocean. The 8 million people she referred to live within proximity of harm should a nuclear disaster occur.

Another year has come and gone, and with it the hopes of any federal legislation to amend the Nuclear Waste Policy Act of 1982 to allow temporary storage of the deadly spent nuclear fuel from SONGS, located just south of San Clemente, in locations that are far from the coastline.

"No Toll Road Through San Clemente" signs were amended with a sticker to include "Nuke Dump" in the slogan during a protest Dec. 30 in San Clemente. Photo: Eric Heinz

Kate McClure, 7, peeks through a sign during a protest on Dec. 30 at San Clemente Community Center. Photo: Eric Heinz

Charles Langley, executive director of Public Watchdogs, dressed in a radiation protection jumpsuit with a gas mask and carried a surfboard to symbolize his organization's opinion of the fate of the surf beaches near the area where San Onofre Nuclear Generating will store spent fuel. Public Watchdogs hosted a protest of the actions on Dec. 30 at San Clemente Community Center. Photo: Eric Heinz

Public Watchdogs' in-house geologist Robert Pope speaks to an audience of a couple hundred people during a protest of the storage of spent nuclear fuel at SONGS on Dec. 30 in San Clemente. Photo: Eric Heinz

San Clemente City Council member Lori Donchak told people at a Dec. 30 protest that if they want to get involved with preventing the storage of spent nuclear fuel at SONGS to call their federal representatives. Photo: Eric Heinz

Rep. Darrell Issa, CA-49, who represents the congressional district in which San Clemente is located, introduced bills to amend the act from 2015 to 2017, all of which never progressed to floor discussions. Earlier this year, Rep. John Shimkus, IL-15, introduced a similar bill that would allow for the same provisions. The bill was reviewed by several House committees but made it no further. This legislative move is supported by Southern California Edison (SCE), the SONGS majority stockholder and operator, whose officials have said at meetings that they too want the spent fuel out of the area.

Some of the fuel is ready to be transported today, while some of it needs to continue to cool until its radiation reduces.

Jackson Hinkle, the president of Team Zissou, led a protest march from Avenida Del Mar to the I-5 freeway with a bullhorn following the group of speakers.

Prior to the protest, the San Clemente Times reached out to SCE about the timeline of the storage of the remaining spent fuel rods. SCE officials reiterated comments of Tom Palmisano, the vice president of SONGS decommissioning and chief nuclear officer, made during the Nov. 2 Community Engagement Panel meeting. The panel is comprised of a group of elected city officials, environmental groups, Camp Pendleton and nuclear experts, and is intended to serve as a public information outlet. The panel meets quarterly around Orange and San Diego counties.

Officials from SCE said they expected to move the fuel to dry-cask storage sometime this winter.

“Right now, tentatively, we will be ready to start moving fuel from the spent fuel pools to the dry storage system in mid-December,” Palmisano said at the Nov. 2 meeting. “That’s a tentative date. We have a number of reviews that we (must) complete and NRC (Nuclear Regulatory Commission) inspections, so that date may change depending on how much work we have remaining to do. That’s the earliest date we would start.”

The storage process is expected to be completed in mid-2019. Opponents of the storage said they are convinced if the plans are not halted, the spent fuel will remain at the San O site in perpetuity as the federal government sits on the issue. The Department of Energy is the ultimate authority on where and when the fuel is transported and stored.

The spent fuel was initially planned to be stored at Yucca Mountain in the Nevada desert before the Department of Energy withdrew a permit for the facility in 2010.

In 2015, SONGS operators were granted a permit by the California Coastal Commission for the storage of the spent fuel.

SCE is currently providing $193,600 to the city of San Clemente each year until 2020, in an agreement with other cities, for emergency planning and response in the event of a nuclear catastrophe.