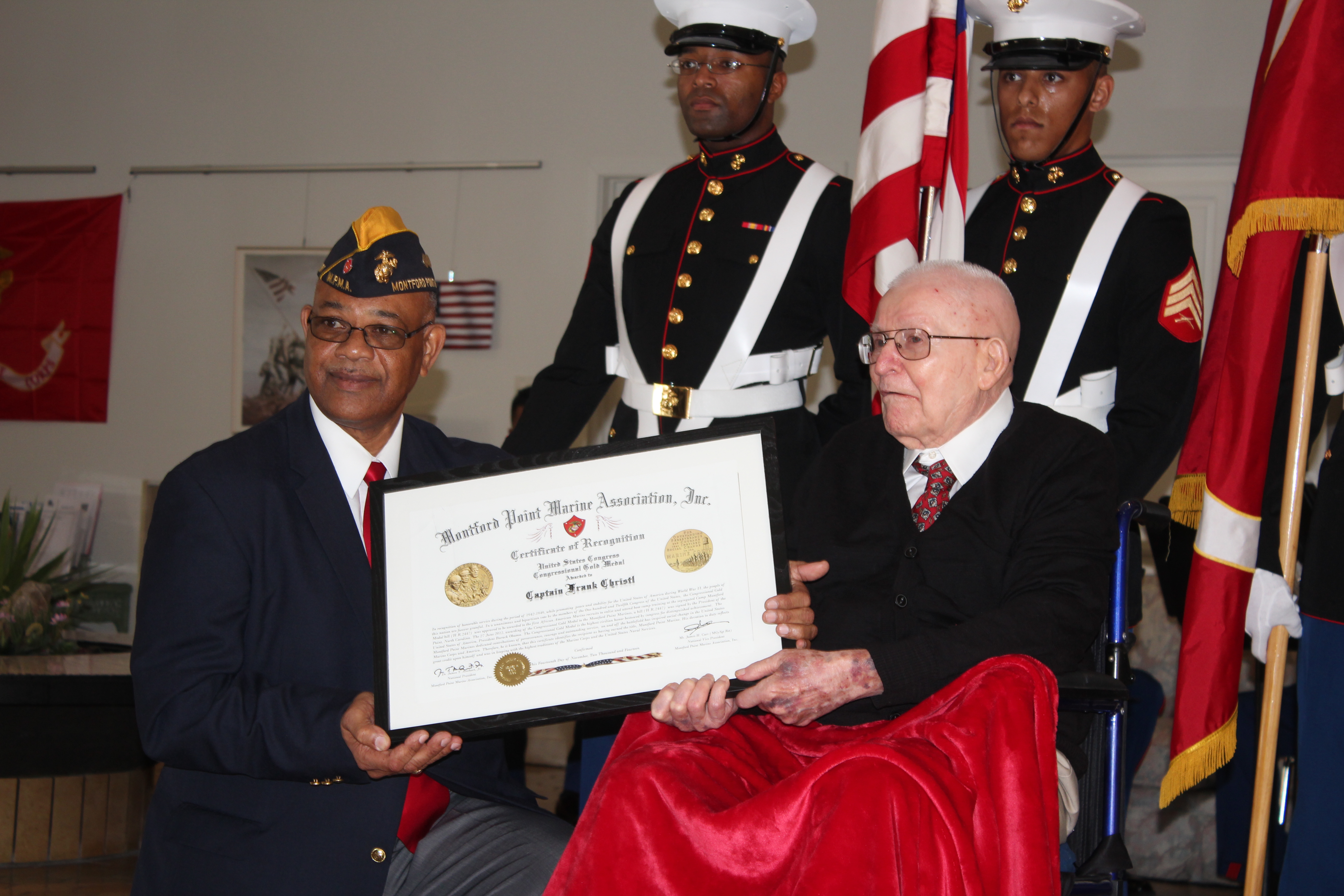 Seventy years ago, Frank Christl served in a very different Marine Corps. But he did his duty. In doing so, he helped to make history and change the Corps for the better.

Friday, Christl, 92, was honored with one of the nation’s highest civilian honors, the Congressional Gold Medal, at the clubhouse at Shorecliffs Terrace. It came as a result of more than two years of work by Christl and his good friend and neighbor, Woody Holtz.

When President Franklin D. Roosevelt opened up the opportunity for service in the Marine Corps to African-Americans in 1942, the first recruits were sent to a segregated camp, Montford Point, near what became Camp Lejeune, North Carolina. After graduating from USC and officer training school in 1944, Christl, who is white, was sent there as well to serve as an officer overseeing the camp. All the camp’s officers were white, while all the volunteers, including many noncommissioned officers, were black.

The original Montford Point units were formed into ammunition depot companies. When Christl’s unit, christened the 5th Depot Company, was transferred to the Pacific, largely through Christl’s efforts, it was responsible for bringing supplies from ships to support landing parties that had gone before. The units from Montford Point would, however, fight beside white Marine companies when action dictated it and were involved in the invasions of both Saipan and Okinawa during World War II.

After the war, Christl was stationed in Tientsin, China where he worked to repatriate Japanese prisoners-of-war.

The Marine Corps, and all other branches of service, were integrated by President Harry Truman’s executive order No. 9981 in 1948. Montford Point was shut down as a training camp the following year, and African-American Marines would train with whites at Parris Island, S.C. and in San Diego from that point forward.

The Gold Medal, which, along with the presidential Medal of Freedom, is the highest civilian honor the nation can bestow, was presented en masse to all Montford Point Marines in November 2011 and was given to more than 400 former Marines at the U.S Capitol the following June. A ceremony was also held at the Montford Point site. The Marine Corps and Montford Point Marine Association have spent the last two and a half years awarding Gold Medals to hundreds of others who, like Christl, were unable to attend or who were initially unaware of the honor.

Marine Brig. Gen Edward Banta, commander of Marine Corps Installations West-Camp Pendleton, attended that ceremony and noted that many of the former Marines honored at the Capitol actually checked themselves out of a hospital to be there. Banta said when touring the base today, he is struck by the difference made by men, like Christl, who helped to integrate the Marines.

“As I go around our region today and visit with your Marines, I’m so proud of the diversity I see in the ranks,” Banta told the crowd that assembled to honor Christl. “Thank you, Mr. Christl, for helping us to evolve into the force we are today, and to bring dignity and opportunity to every Marine.”

A Friendship Born From History

Holtz, a former Army officer and military history instructor at Iowa State University, met Christl while preparing a short biography of the new resident for a Shorecliffs Terrace newsletter.

“I found out the basics of his service,” Holtz said. “Then I realized there was a whole big story there that needed to be told. I’m a former Army officer, so I understand the importance of history and I knew his history shouldn’t have been lost.”

There was also the matter of letting Christl’s family know about their father’s full history, since, like many World War II veterans, he often didn’t talk a lot about his experiences.

“They deserved to know, and Frank’s forgotten almost everything about his service, because his long term memory is quite bad,” Holtz said.

Holtz would meet with Christl three or four times a week in an attempt to piece together his story, which was made difficult because Christl has difficulty speaking. But Holtz said once he began to talk, Christl began to remember. Holtz also used his research skills and contacts to do his best to find Christl’s war record. This included cooperation from staff at Camp Pendleton.

The search helped drum up misplaced or forgotten memories such as Christl’s role in celebrating the Marine Corps’ 170th anniversary while in China, an event that included borrowing a French officer’s sword to cut the large cake created by a German baker.

“It became a test to see if we could get to the end,” Holtz said. “As the historical aspects of Frank’s story emerged, I had a growing sense of being honored to be able to tell the story.”

Holtz’s original intent was to create a book about Christl’s war record to present to his family, but along the way, Holtz discovered the honor the Montford Point Marines had been given by Congress and believed his friend might be eligible, which was confirmed by Congressman Darrell Issa’s office.

However, that meant the duo needed to find some sort of paper record of Christl being at Montford Point. After several months of searching, Holtz located a Marine “muster roll” for Christl’s unit at the Marine Museum in Quantico, Virginia, which sent along a copy.

Holtz said he’d learned much, not just about his friend but about the history of the unit.

“The more I got into, the more I realized little had been written about them (the Montford Point Marines),” Holtz said. “I think it’s a fabulous story. The Gold Medal is also really one given to the Marine Corps itself, for overcoming the segregation and racial attitudes that existed in the 1930s.”

Holtz managed to compile the story of Christl’s service, together with a large number of photos of the events he would have been present for or known about into a book, which he presented to Christl at the ceremony Friday, along with members of his family.

“Without Woody’s effort, we wouldn’t have this wonderful book, nor would we be here today to celebrate my Dad’s Congressional Gold Medal,” Moorhead said. “Woody did it all.”

An Honor for a Family

Perhaps the biggest treat for Christl was having all nine of his children, along with large numbers of his 30 grandchildren and 18 great-grandchildren, in attendance.

Frank’s son John said while he was growing up he was aware of the outlines of his father’s service, but not the particulars. John said he knew his father had been at Montford Point and was on the beaches at Okinawa, but that was the extent of it. His father’s story came into more detail a few months before Holtz began his work, when John’s son Keith, then a student at Bernice Ayer Middle School, interviewed his grandfather for a project about events that shaped history, though Holtz’s efforts were more in depth.

John said his father, who went on to become a business litigation attorney in Los Angeles after his service, was always a humble man who didn’t necessarily see his own contributions to the Corps as particularly remarkable.

“My Dad never really thought anything of it.  He was always fair and kind to everyone,” John said. “He was a Marine, doing what a Marine did.”

In some ways, John said, learning more about the man his father was in the service only served to illuminate why he became the man he was. Still, he said, the effort made by Mr. Holtz, and the award his father received, is one he and his family will always cherish.

“It was an unexpected honor and gift for my father and our family,” John said.