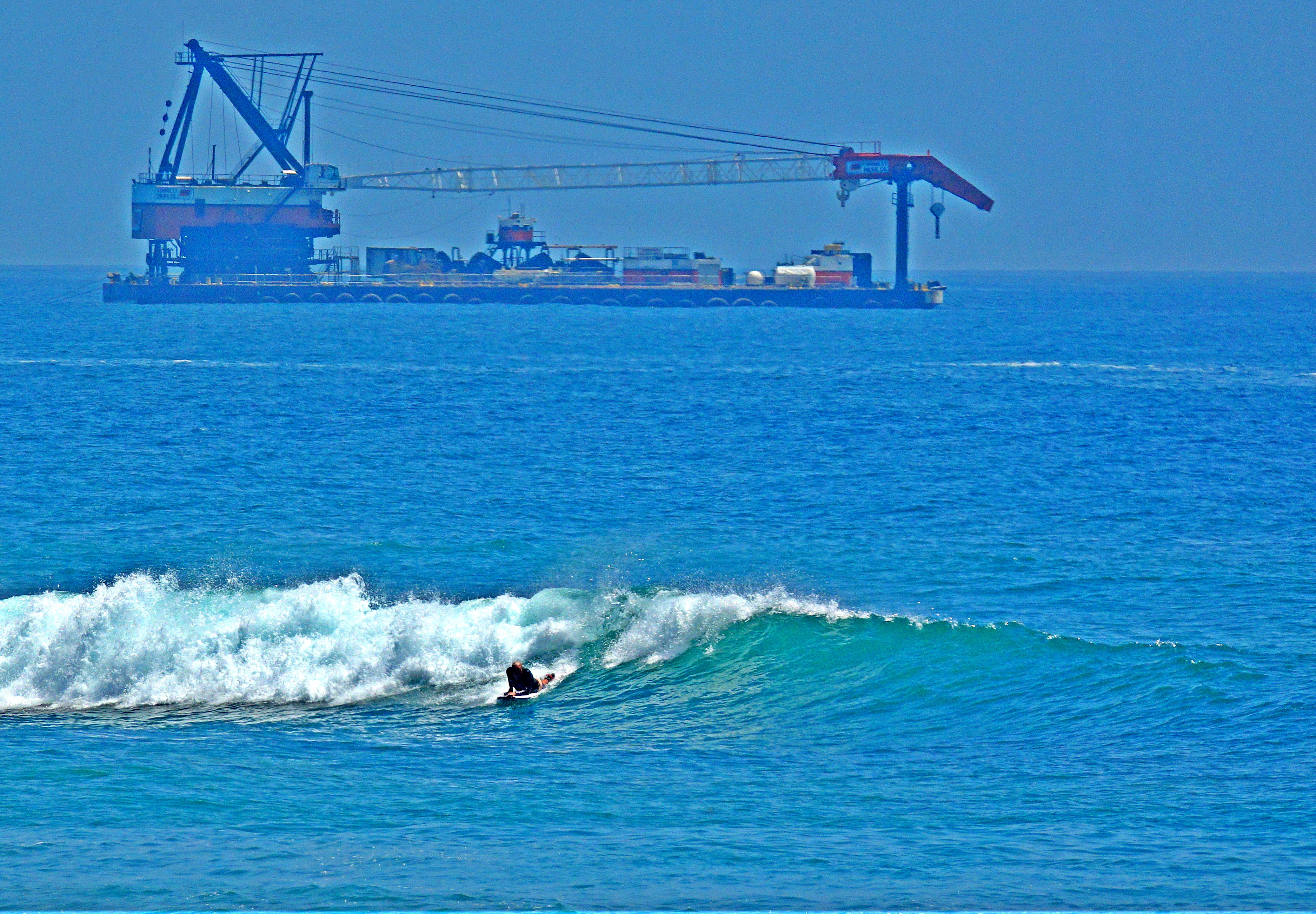 If you’re wondering what that barge is doing south of the San Clemente pier not quite a mile offshore, it is the platform from which Southern California Edison has begun laying rock for its Wheeler North Expansion Project.

Wheeler North Reef, a 174-acre, man-made kelp forest, currently stretches from out past the end of the San Clemente Pier south to Seal Rock. SCE is expanding the reef to more than double the size (384 acres) and stretching it into Dana Point waters. Mandated by the California Coastal Commission, the reef is intended to facilitate kelp forests that were lost to warm-water discharge from the San Onofre Nuclear Generating Station (SONGS).

Currently about 0.6 miles offshore, rock will continue being deposited onto the ocean floor off the San Clemente coast until mid-August.

About the third week of August, the barge will move north until it is directly in line with the pier, and then it will work its way northward, according to McGee. The northernmost portion of the new reef will be located just off of Beach Road on the southern tip of Capistrano Beach.

The project is anticipated to pause in September and resume next year in May and September 2020.

McGee said the rock is being placed in a single layer at depths of 38- to 48-feet-deep in areas that are “heavily studied, very precise locations.”

The reef material includes metavolcanic and granitic boulders about one-half to three feet in diameter and hail from rock quarries in Catalina Island and Ensenada, Mexico.

SCE warns that boaters should be aware of the barge.

“We have six anchors stabilizing the barge, secured by very large white surge cans,” McGee said. “We need boaters to have a 2,500-foot clearance around the derrick barge. It is a construction zone. The anchor wires are under extreme tension, because they are stabilizing this large barge in the open ocean.”

The project manager said other watercraft—such as kayakers and paddlers—should also keep a safe distance from not only the barge but the two tugboats that are bringing rock to the barge.

“We just don’t want boaters going in between the wires and barge itself or getting too close to the surge cans,” said McGee.

SCE has contracted Connelly Pacific to help with the reef construction.

“We are really excited,” she said. “It’s going to create giant kelp habitat.”

For boaters, the project is listed in the U.S. Coast Guard Local Notice to Mariners, which provides call signs and radio frequencies for the derrick barge and tugboats working on the reef project. For questions, visit songscommunity.com or email nuccomm@songs.sce.com.