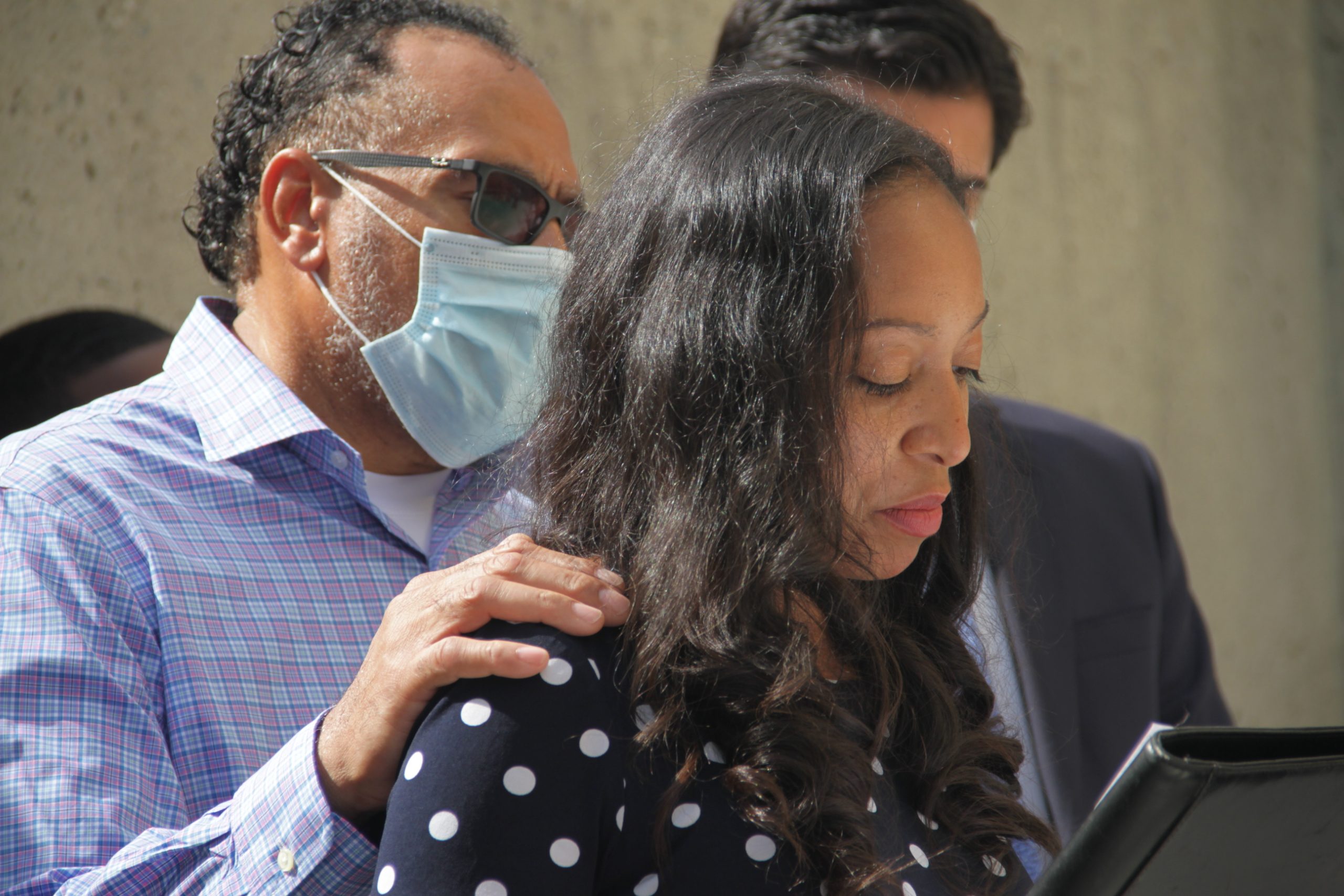 The family of  Kurt Reinhold, a 42-year-old Black homeless man who was shot and killed by a homeless outreach deputy during an altercation outside a San Clemente hotel last month, has filed a wrongful death claim against the county, as well as the two unnamed officers involved.

“My heart is broken,” Latoya Reinhold, Kurt’s wife and mother to his two children, said during a press conference on Tuesday, Oct. 6. “Now all we can do as a family is be there for each other, stay strong, and hope and pray for justice.”

Reinhold, who reportedly suffered from mental illness and had been intermittently homeless for the past few years, is believed by the Orange County Sheriff’s Department to have reached for an officer’s firearm during the Sept. 23 scuffle on El Camino Real.

Attorneys representing Latoya argued, however, that the two deputies had escalated the situation when they stopped Reinhold on that early afternoon outside Hotel Miramar, calling their use of deadly force “excessive and unreasonable.”

Outside the Central Justice Center in Santa Ana on Tuesday, Latoya and Reinhold’s extended family, including his mother Judy Reinhold-Tucker, accompanied attorneys John Taylor and Neil Gehlawat for the press conference announcing the government claim.

The attorneys explained that the claim is the first step before they can file a lawsuit.

The family and friends “are here to seek accounting and accountability from the Orange County Sheriff’s Department for the outrageous failure in their handling of (the) homeless population—their outrageous interaction in dealing with someone who’s got a mental illness,” Taylor said. “The families seek justice, they seek transparency, they seek accountability.”

An investigation into the matter is currently being conducted by the Orange County District Attorney’s office. OCSD has said it also is conducting its own internal investigation.

In a prepared statement from OCSD, Sheriff Don Barnes touched on the DA’s investigation to state “we should not tolerate attempts to inflame and drive a narrative that does not fully capture the context of this singular incident,” and that judgment should be reserved until the investigation is completed.

“What led to the initial contact with the deputies is part of the ongoing investigation. During the physical altercation, Mr. Reinhold grabbed one of the deputy’s guns,” Barnes said in the statement. “This information is shared as a factual circumstance of the encounter between the deputies and Mr. Reinhold, and not to excuse or assign blame to either party.”

Taylor and Gehlawat on Tuesday said Reinhold’s contact with the weapon was purely incidental and not intentional.

“What we think is happening, if you watch the video, is Mr. Reinhold is in a chokehold by one of the deputies and his head is lodged in the deputy’s stomach, and he’s got him in a chokehold and he’s flailing his arms, and his left arm incidentally ends up at one point touching the area where the deputy’s firearm is,” Gehlawat said.

“But by no means do we believe that he was actually trying to reach for it,” he continued, adding, that they also don’t “think it was actually physically possible for him to retrieve the gun from the position he was in.”

Cell phone camera footage of the interaction and subsequent altercation, taken from across the street and circulated on social media, showed Reinhold telling the deputies to “stop touching me” and asking “what is your problem?” as he tried to walk away.

The nearly 90-second video also shows the deputies notifying Reinhold that he had been jaywalking, instructing him to sit down.

The altercation ensued when one deputy grabs Reinhold from the side, while the second deputy comes around and appears to tackle him, resulting in all three going to the ground. The two deputies are then seen pinning Reinhold on the ground.

The camera video continues to roll, showing the struggle further unfolding across the street while motorists passed between the videographer and the altercation. As a truck and SUV pass by, a gunshot goes off. Another one goes off seconds later while the videographer positions himself behind a vehicle.

Barnes, in the department’s prepared statement, extended OCSD’s condolences to Reinhold’s family and added that “every time law enforcement contact escalates to the use of deadly force, it is tragic for the family, the deputies and the community.”

“The Orange County Sheriff’s Department takes seriously our responsibility to provide professional and transparent law enforcement services to our community,” Barnes said. “As yours sheriff, I commit to being forthright and transparent as this investigation continues.”

According to OCSD, deputies had previously made contact with Reinhold prior to the day of the shooting. Carrie Braun, OCSD spokesperson, said authorities are still working to determine the exact number of times contact was made, adding that they all took place approximately within the span of a month prior to the incident.

Asked when was the last time Reinhold had interacted with a member of his family prior to the Sept. 23 shooting, Taylor said he had been staying with his mom for the month of August.

“There were periods of time between the last 18 months to two years where, because of mental illness and issues that he was having, he would have lived with either his wife and/or his mom, and he would leave for a time,” Taylor explained.

As part of their government claim, Taylor and Gehlawat are calling on OCSD to release to the family several pieces of key information related to the incident, including records of OCSD’s previous contact with Reinhold.

They’re also seeking the autopsy report and the names of the deputies involved so a request can be made into their personnel files to determine whether they had prior incidents of excessive force.

Furthermore, they’re seeking the footage of the incident, “not just the select portions that they paused and stilled and showed, but the entire footage that’s in their possession,” as well as the radio traffic leading up to the stop “so we can determine if there was ever a reason for them to be contacting Mr. Reinhold in the first place.”