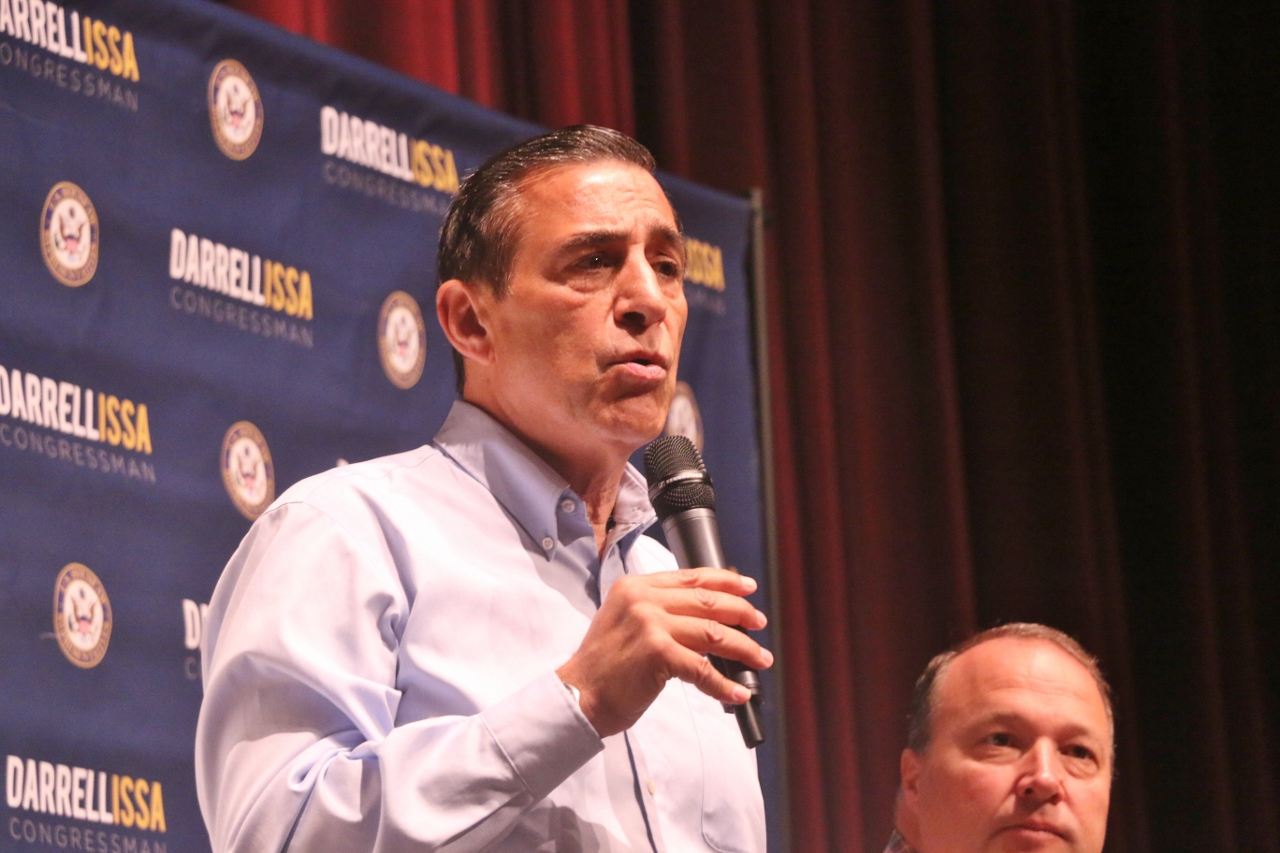 Updated: Rep. Darrell Issa Announces He Will Not Seek Re-election

Statement from Rep. Issa says he will not seek re-election at the end of his term this year

Article updated at 11 a.m. and at 12:30 p.m. on Jan. 11 to reflect candidates who have since declared they will run for California’s 49th congressional district.

At a rally in June in San Juan Capistrano, one of many GOP politicians hosted in 2017, Rep. Darrell Issa, CA-49, did not hesitate to say he would run again for the Congressional seat he’s held since 2001.

That changed on Wednesday morning, Jan. 10, when a statement was released by Issa’s office in Washington, D.C. declaring he would retire at the end of his term this year.

“Throughout my service, I worked hard and never lost sight of the people our government is supposed to serve,” the statement read. “Yet with the support of my family, I have decided that I will not seek re-election in California’s 49th District.”

San Clemente is part of Issa’s district that, since 2012, stretches from San Juan Capistrano down the coast to Solana Beach. The district has been a Republican stronghold since Issa won his first election. But Issa faced his stiffest competition last year, narrowly defeating challenger Doug Applegate, a Democrat based out of San Clemente. Issa won Orange County by 21 percentage points but lost San Diego County by 20 percentage points.

With the election of President Donald Trump, the political landscape changed dramatically over the last year. Many people in San Clemente beseeched Issa to take action against the potential construction of a toll road through the city and to fight for access to affordable healthcare.

Issa’s decision to not seek reelection is the latest in a series of recent announcements by Congress members and senators who have also stated they won’t vie for their seats in November.

So far, five candidates have announced they will run for Issa’s seat. Four are Democrats: Applegate, Mike Levin, Paul Kerr and Sara Jacobs. The fifth is Jordan Mills of the Peace and Freedom Party.

Since Wednesday’s announcement, three Republicans have declared their intent to run for the 49th. The candidates include Dana Point’s Diane Harkey, who is the chair of the California State Board of Equalizaiton; the San Deigo Union-Tribune reported Oceanside’s Rocky Chavez, currently the Assembly member of the state’s 76th district; and Joshua Shoonover, a patent attorney and engineer with a degree in chemical physics.

(Editor’s note: The San Clemente Times contacted Harkey, the San Diego Union-Tribune statements for Chavez and Shoonover’s campaign page for confirmation. There may be more candidates in the near future).

Known as a fierce and fiery Republican, Issa became well-known after the 2008 general election, voicing opposition to many Obama administration policies. In 2011, he was appointed as the Chairman of the House Committee on Oversight and Government Reform.

Although he is a skeptic of science on global warming, he recently opposed the Trump administration’s move to reopen offshore oil drilling along the California coastline.

Issa was also a proponent of expediting requests for public records and opening transparency of federal spending.

Locally, Issa attempted to pass bills on three separate occasions to have the spent nuclear fuel at San Onofre Nuclear Generating Station (SONGS) moved off-site through amendments to the Nuclear Waste Policy Act of 1982. None of them made it to the House floor.

His most recent piece of legislation targets highly skilled foreign workers who are not immigrants and would require these workers to have skills that are worth salaries of $100,000 or more and would eliminate the masters or higher education degree criteria.

Although he’s leaving Congress at the end of the year, constituents of the 49th congressional district may not have seen the last of Issa, as he foreshadowed at the end of his Wednesday statement.

“While my service to California’s 49th District will be coming to an end, I will continue advocating on behalf of the causes that are most important to me, advancing public policy where I believe I can make a true and lasting difference, and continuing the fight to make our incredible nation an even better place to call home,” Issa’s statement read.