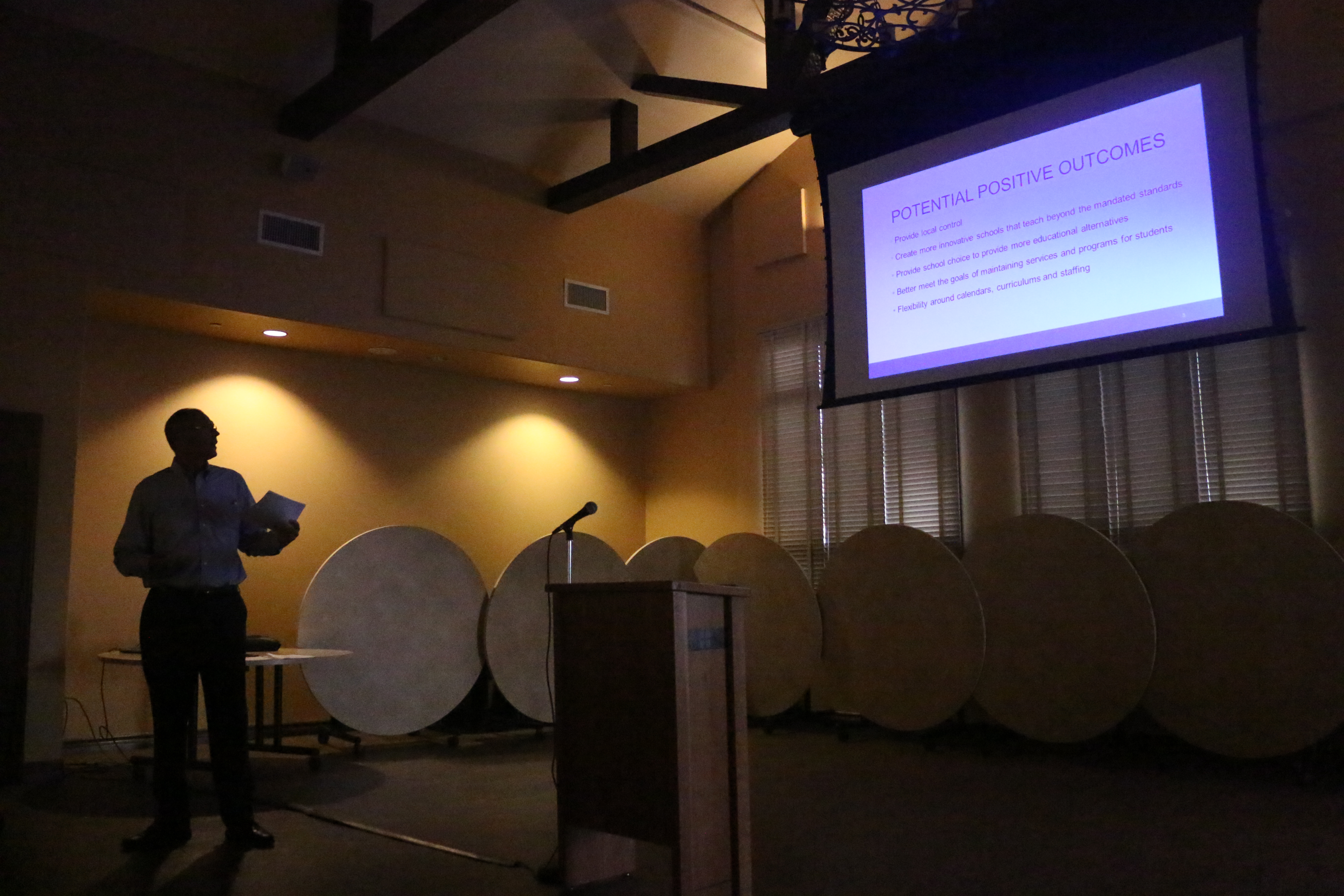 During a meeting Tuesday at the Dorothy Visser Senior Center, staff from the city of San Clemente and Councilman Tim Brown discussed some of the research the city has done in exploring the possibility of a brand-new school district that would oversee only San Clemente schools.

City Manager James Makshanoff said the city would not be part of the process to form the district but was willing to help gather and provide information to the residents. The School District Separation Memorandum was published on the city’s website, www.san-clemente.org, in early July.

Brown said people had asked him about what it would take to form a separate school district from Capistrano Unified School District, the San Clemente schools’ current district.

At the Tuesday meeting, the 31 people in attendance were quick to voice their frustrations with the current administration of CUSD.

Much of the angst toward the current district is short-term as well as longstanding. Some parents are frustrated with the distribution of special taxes that pay for the district’s infrastructure with only portions coming to San Clemente High School, which people said they think is in desperate need of a tune-up. The taxes have been in place for more than 10 years for some San Clemente residents. Others are still miffed about the dismissal of former SCHS principal Mike Halt in May and the lack of communication the district provided during the process.

Brown said he thinks people feel “disenfranchised” and that their opinions have been ignored by CUSD officials.

“When people feel like they’re not being heard or considered…you feel vulnerable,” Brown said.

As far as the buildings the district uses, Makshanoff said the new district would possibly not have to buy them.

“It’s an interesting question because the district didn’t buy those buildings, so it may not be an added cost,” Makshanoff said.

What it Would Take

It’s not an easy road to secede from CUSD. Makshanoff said according to the legal advice he has received, the residents within San Clemente most likely wouldn’t be able to just vote themselves out of the district.

According to the city’s report on making a new district, California hasn’t had a new unified school district formed in the last quarter of a century. The most recent progress has come from Malibu where a new district is attempting to form, but it’s taken them three years to get the decision to the ballot.

“We’re going to pay the money either to the school district or to San Clemente. There has to be a bond from somewhere. The question is who controls the process and who spends it.” -Tim Brown, City of San Clemente Councilman

California Education Code mandates 25 percent of registered voters within a district must sign a petition to put the district decision on a ballot—in CUSD’s case, that’s nearly 50,000 signatures. Makshanoff said the cost of the petition is estimated to be $50,000 to $70,000 and would most likely have to be privately funded.

Even if the signatures are obtained, a feasibility study—which would include an environmental impact study, diversity study, property tax and finance study and more—would have to be completed and accepted by the State Board of Education.

More questions down the road would include being able to be competitive with current teacher salaries, insurance and retirement policies, unions and more.

One issue that also could arise is the bond obligations property owners currently have tied into the school district.

Brown said although costs for infrastructure and facilities is inevitable, the city’s own district would at least have control of the funds, rather than compete against the rest of CUSD.

“We’re going to pay the money either to the school district or to San Clemente. There has to be a bond from somewhere,” he said. “The question is who controls the process and who spends it.”

Brown said the district would have to try its hardest to retain the teachers the schools currently have, but he said nothing for the facilities has changed in the last 30 years.

“There are certain facts that we are presented with that are inescapable, and that is we have a whole series of aging facilities that have millions in deferred maintenance in which there is no plan for them,” Brown said.

Serge Jonnaert, a San Clemente resident who was present at the meeting, said he would like to see more oversight of any school district government that is formed. Jonnaert said the formation of any government would have to be vetted in the community’s trust and communication would have to be clearer for anything to work.

“If we look at all options on the table, we have the superintendent, the board of trustees…we’d have a whole new set of characters coming into play, and who knows what is going to happen in the next few years,” Jonnaert said. “One of the things we learned through this whole process is that we, as a community, have our hands tied. We really have to depend on decisions that are made by the trustees. We can make noise but ultimately if they don’t listen and there’s no communication, the community is not well-served.”

One suggestion mentioned during the meeting was to form a citizens coalition to get support. CUSD Board of Trustees also would have a say in the matter, but it is not necessarily a unilateral decision. Whatever happens next is up to the citizens of San Clemente.