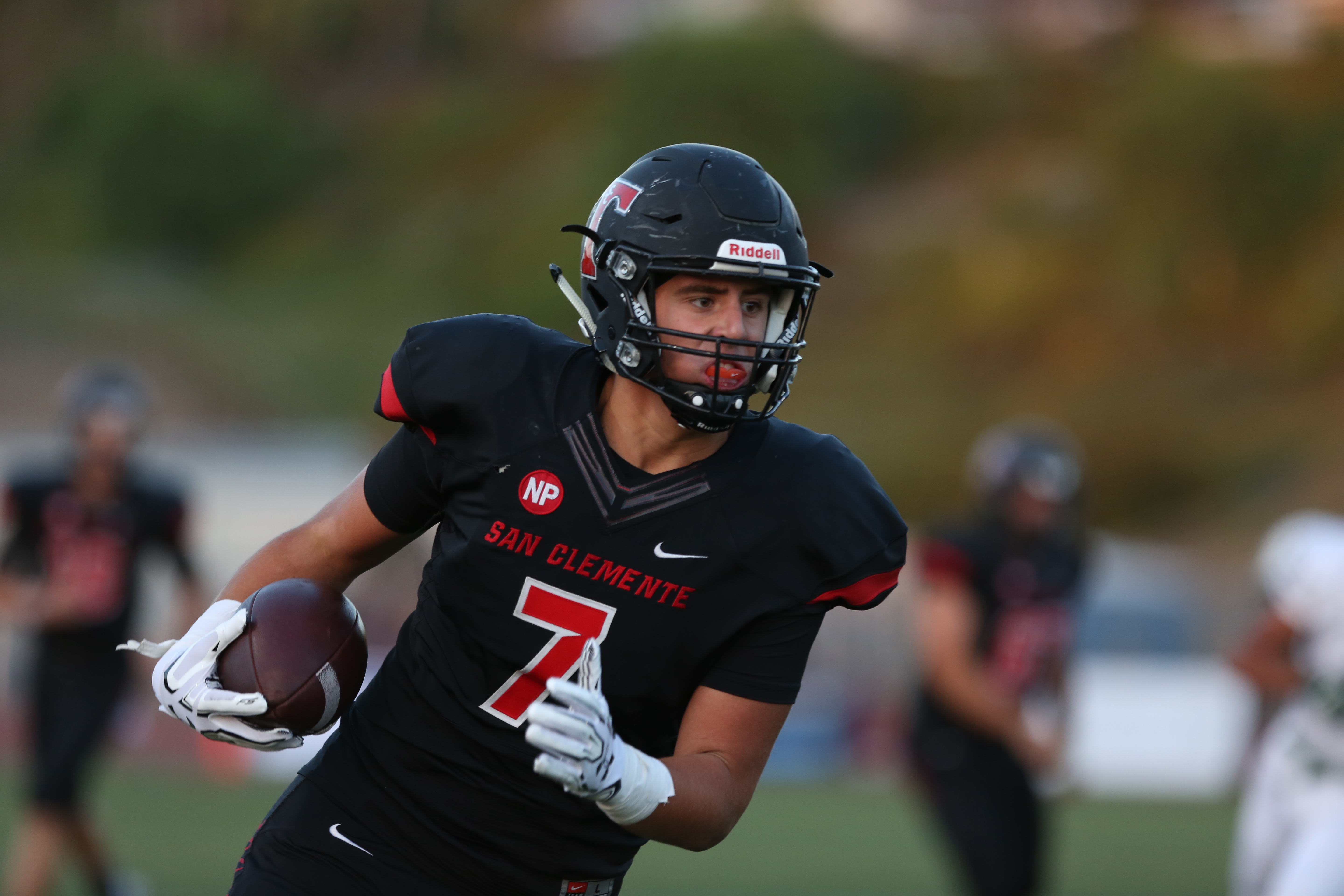 At first, Isaac Rex thought he had torn both his ACL and MCL. He had just taken a hit at the knee against Roosevelt High School running a five-yard out, and the 6-foot-5, 235-pound tight end had another defender draped across his back when it happened.

He tried to get up and continue playing, but he took two steps and collapsed. It was a tense moment at Thalassa Stadium as Rex, a BYU commit, was helped off the field.

But what Rex thought initially would be a major setback to his football career turned out to be just a speedbump. X-rays and an MRI revealed that he had cracked the femur around his right kneecap, and he would have to sit out for several weeks.

Rex has been a very productive player for the Tritons over the past two seasons. He played some tight end as a junior, and started at the middle linebacker position, where he had 44 tackles. He switched to play tight end exclusively this season and figured to be a large part of the Tritons’ loaded offense.

The injury to his femur occurred on Sept. 9, and after six weeks off, Rex made his return to the lineup against Trabuco Hills on Oct. 28.

He has since more than made up for lost time and is one of the many reasons why the Tritons will appear in the CIF Division 1-A State Championship game in Sacramento this Saturday.

In the six games Rex has played in since he returned from the injury, he has 16 receptions for 172 yards and two touchdowns.

Rex has been a large part of the Tritons’ offensive game plan throughout the postseason and played a pivotal role in the Tritons 45-35 CIF-SS Division 2 Championship victory over Murrieta Valley, where he caught a season-high seven passes for 70 yards. He was also a force in the Tritons’ CIF Division 1-A South Regional victory over Edison on Dec. 10. He caught three passes for 24 yards and scored a touchdown, and nearly scored a second time in the final minutes but was ruled down at the Chargers’ one-yard line.

“I really wanted to get back out there. It was tough doing rehab and watching my guys compete every day and work hard and I couldn’t do anything to help them out,” Rex said. “Once I was able to get back, I was super thankful and prayed every day and thanked God for all the blessings; for not having me be out two years and instead only be out six weeks.”

Rex’s journey back to the field was not easy. He couldn’t walk for a full week following the injury and was laid up at home on bed rest. His trainer, physical therapist and doctor encouraged him along the way, and he made small, incremental strides each week. He went from walking on crutches, to walking, and eventually built up enough strength to start running and working out again.

“He could have easily said, ‘Hey, I’m going to BYU, so I’m done’,” San Clemente head coach Jaime Ortiz said. “But no, he fought his way back to being a really effective player on our offense.”

Rex’s skills extend beyond being able to reel in passes and bowl over opposing defenders for yards after the catch. He is a crucial part of the Tritons blocking scheme at the line of scrimmage, and as a senior, he helps provide valuable leadership, Ortiz said.

For those who watched the Tritons win the CIF-SS Division 2 Championship on television on Dec. 9, you could see just how much the win meant to Rex. In the immediate aftermath of the victory, after the Tritons were awarded the championship plaque, the camera fixed on a large group of Triton players and Rex was at the center of the pack, cradling the trophy and smiling while his teammates cheered on.

“This has been the most magical year,” Rex said when thinking back on the team’s triumph. “It’s been a long process, but it was all worth it.”