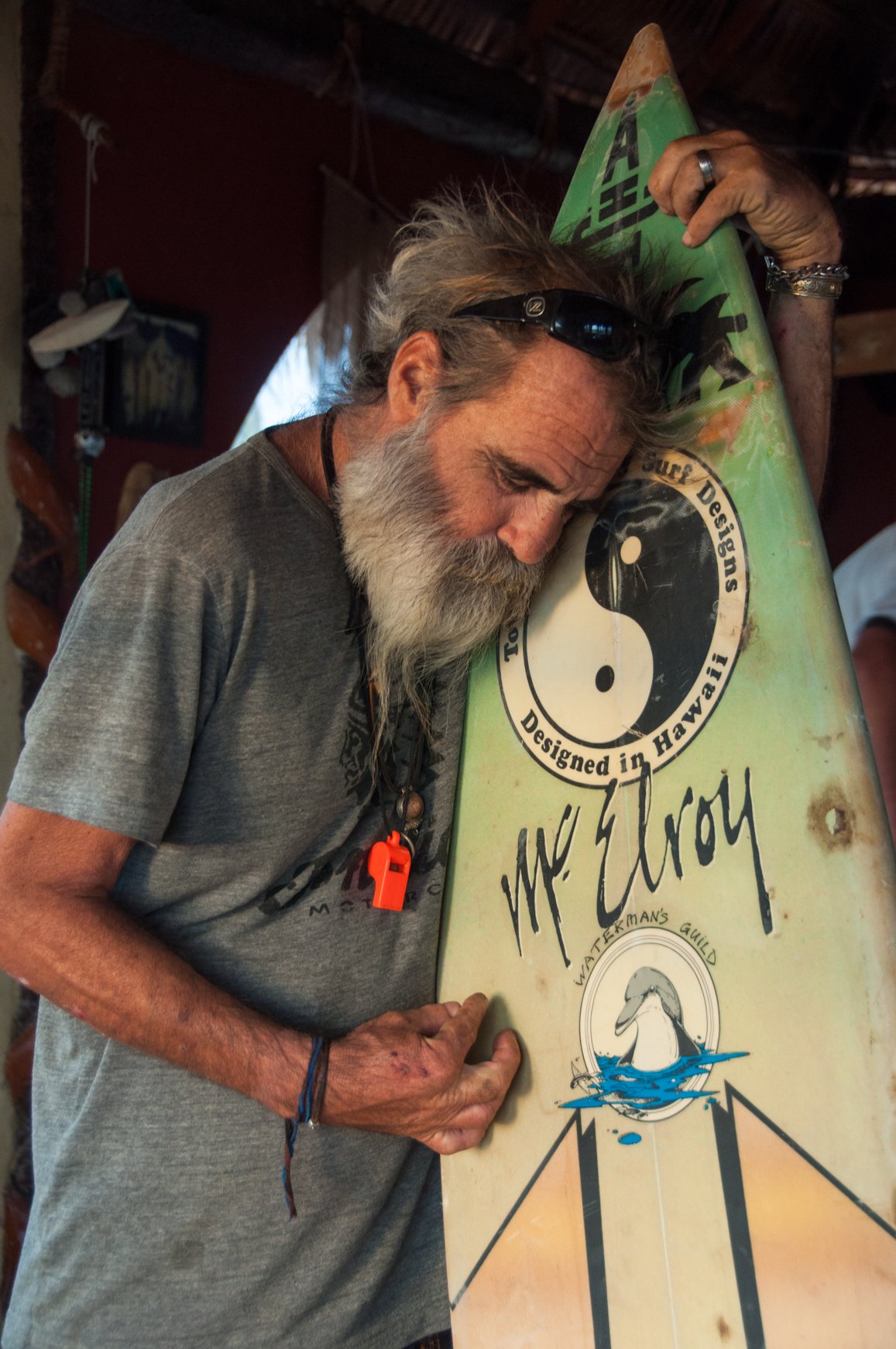 In the heyday of San Clemente’s Surf Ghetto, shaper Chris McElroy was the undisputed man. Calle de Los Molinos was his kingdom. He was the guy making local heroes such as Christian Fletcher and Dino Andino the boards that sent them into the stratosphere. He took Dino to his first NSSA contest when he was 11. He shaped Mitch Colapinto’s first thruster. A creative force, an artist, craftsman, mentor and troubled soul, McElroy and his famous air guitar have now slipped into legend.

Throughout the ’80s and into the ’90s, McElroy’s shapes could be found everywhere. The walls of his shaping bay were famously plastered with photos ripped out from the magazines. From covers of Christian boosting to Dino’s full-rail speed carves, at a moment in time when surfing was progressing seemingly every day, it was McElroy who was providing the spaceships for all of the explorations. And while he relished in the international exposure, Trestles and the hut at Uppers were his zones of choice—and he got whatever wave he wanted in the ultra-competitive lineup.

Not only was McElroy building great boards, but he also took young shapers such as Matt Biolos and Timmy Patterson under his wing. In its raw, wild radicalness, McElroy embodied the era.

“He carried himself like a bona fide surf star,” Biolos wrote in a touching remembrance on Instagram. “He partied like a rock star and had the best ‘air guitar’ I ever saw, but he could play as well. He always had an entourage of sorts. He was fun. He’d party with us, ask us questions, let us hang out upstairs in the Hydro Glass den of decadence. He was inclusive. He’d pay me to paint his team riders boards . . . and tease the crap out of me for ‘drawing skulls and devil crap on my boards!’ In the bustling, surfboard-building ghetto, we all wanted to be him. He was the archetype.”

Fading from the scene in the late ’90s, he spent some years living down around Todos Santos in Baja, Mexico.

“That rock-star lifestyle caught up to him. More parties than surfing. More parties than working. In the end, the fall was radical. Yet he somehow kept his magnetic and hypnotic character for decades,” continued Biolos. “Through it all, he could still hold court. Even when teetering on homelessness, or holed up in Cabo, there was still some magic in the original ‘Muc.’ ”

Recently, McElroy, whose health had been in decline after years of hard living, had plugged himself back into the Surf Ghetto scene. The guys that he helped build were all too happy to help him try and get back on his feet. It’s a tight community, and for those on the inside, the love is unconditional.

“We got him to almost finish a couple of shapes for Dino, but he just couldn’t physically do it,” said Damien Brawner.

For all of his challenges during the last few years of his life, all the shapers and glassers in the Surf Ghetto continued to do what they could for him. Dino remained close with him to the end.

“You brought so much joy, love, and laughter into all of our lives! I’m grateful I got to say I love you one last time before you left us,” Cole Simler wrote on Instagram. “I wish you could have stuck around a little longer. Rest in peace. Love you, my friend!”

“We learned so much from you. We learned what to do. We learned what not to do,” Biolos wrote.“For myself, Timmy Patterson and many others in our board building community, perhaps that’s your biggest lesson given. Sleep well, Chris. We all loved you.”