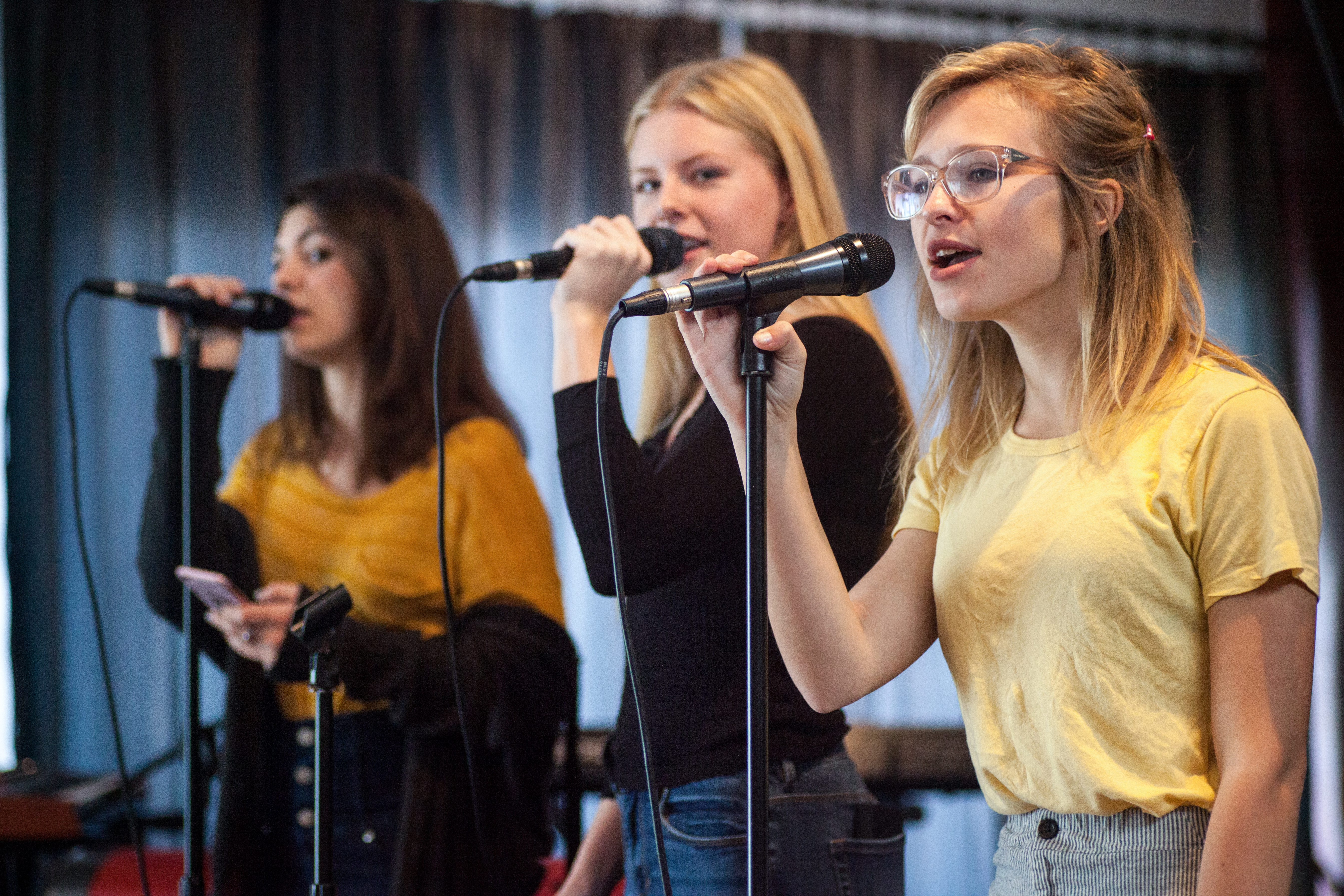 To hear the rock school perform Fleetwood Mac’s Rumours and Van Halen 1, check out their performance Saturday, Feb. 11 at 7 p.m. at The Yost, 307 N. Spurgeon Street in Santa Ana. Tickets are $15 at the door or online. Visit www.losriosrockschool.com or call 949.456.1081 for more information.

Forget what you know about Fleetwood Mac’s Rumours.

The band’s critically acclaimed eleventh album, which was largely recorded in California, is getting a serious makeover in the heart of San Juan Capistrano. And I’m here to tell you—these young musicians aren’t messing around.

On a recent Saturday morning, a group of students gathered for a rehearsal in the lobby of the Los Rios Rock School, tucked back in an unassuming business plaza off Del Obispo Street. There’s one instructor and 20 or so kids. And although I’ve been witness to some of the astounding performances these students have put on in the past, I didn’t know what to expect.

From the first seconds of Buckingham’s “Second Hand News” to the last haunting notes of “Gold Dust Woman,” I was stunned.

Did the songs have that much energy on the original record?

The airy harmonies in “Dreams” and “The Chain” will give you goosebumps. Fifteen-year-old Seth Whiteaker made the acoustic guitar picking in “Never Going Back Again” look like a breeze. And I certainly wasn’t prepared for the emotional crooning of 14-year-old Austin Jenner during his rendition of “Songbird.”

Instructor Justin Norman rocked out with the students for most of the songs, adding minor critiques here and there, but mainly looking like a guitarist who was thoroughly enjoying a Saturday morning jam session.

“They’re good right?” Norman said with a grin as he jumped off the stage.

Good is an understatement.

The young rockers I watched are just one group of the nearly 200 students from all over South Orange County who are pursuing their dreams with the guidance of expert instructors at Los Rios Rock School.

The students make it look easy, but growing this miniature music empire in San Juan has been no simple feat. Rock school founder and co-owner Tyler Marolf will tell you that it took a lot of sacrifice from him and his wife, Melissa. It took drive, persistence and the ability to turn connections into a dream team of professional musicians. During a time of financial uncertainty, the Marolfs put everything they had into the school, and the risk paid off.

Perhaps Stevie Nicks summed it up best—thunder only happens when it’s raining.

A Dream on Los Rios Street

It’s been said that music is energy. If that’s true, then Marolf has enough music in him to power at least 10 rock schools. The 41-year-old musician-turned-entrepreneur of Los Rios Rock School has an infectious optimism and passion for all things music. Talk to Marolf for a few minutes, and you’ll find yourself wanting to pick up the nearest instrument and give it a go.

A native Iowan, Marolf moved to San Juan Capistrano in 1988. He went to Marco Forster Middle School, and grew up not too far from where he and his family live now, in the Los Rios Historic District.

After moving away for a bit, Marolf has called San Juan home since 2005, and it was only a few years later that he decided to take a chance and pursue music as a profession. Marolf and his drummer friend Chris Bates, along with a couple other musicians, started up a band—The In Between.

Marolf said the move to pursue music came after the recession hit. He had been in the mortgage industry, and he made the decision to live off of savings and write an album. He said his band had decent success, but not enough, and he wanted to find a way to stay in the music business. And he really wanted to write a second album.

So in 2010, he obtained an in-home business license and took on his first student, drummer Mary LeBlanc—who, Marolf noted, is still a part of the school and now a professional drummer. The school grew in Lobo Street home over the next 18 months, which he mentioned didn’t always sit well with some neighbors.

“All I was trying to do was write a second album. And I haven’t written it yet. It’s been 7 years,” Marolf laughed. “The kids showed so much promise and learned so fast and it was so much fun. And I thought, this is what I’m supposed to do.”

Los Rios Rock School officially opened its doors off of Paseo Adelanto in 2012 with what could only be described as the most rock and roll ribbon cutting San Juan has seen. Since then, the school has grown from one student and Tyler as the sole instructor, to nine faculty members and nearly 200 students from across South Orange County.

Students enrolled in the private, tuition-based school have access to weekly hour-long private lessons, professional gear, group rehearsals and can audition to be a part of the school’s live shows. The young musicians can also learn about songwriting, recording and even take AP music theory courses.

Marolf said since its inception, students have performed more than 1,000 songs, and most kids stay for an average of three and a half years. Patrons of the Coach House or the House of Blues may have noticed the school often has weekend-long performances at such venues.

“I had no idea it would get this big, or that the culture was going to exceed any one of its parts,” Marolf said. “I thought I was going to be teaching 30 students until I died!”

Marolf said the school’s success has largely come from its teachers, who are all professional musicians with degrees in music, and from listening to the students.

“From day one, I’ve never seen him treat a kid like a kid,” said Chris Bates, co-owner of the school. “He immediately connects with them, and gets them to raise their bar. He treats them with the respect he believes they deserve.”

“There was a period of my life, from eight to 14, when no one was listening to me. So you find people who will, and those aren’t the best people sometimes,” Marolf said. “That’s why our culture here in the school is so adamant about listening to kids.

“The wisdom thing happens fast if you just believe in them,” he said.