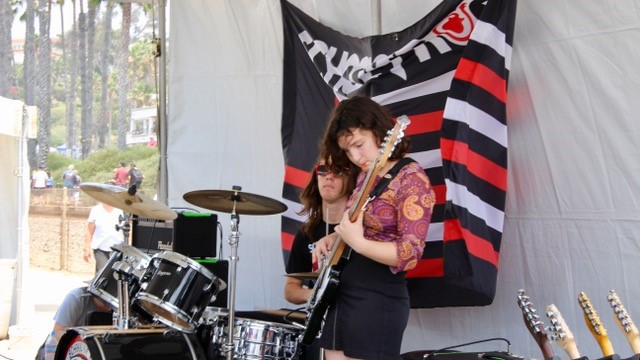 A handful of newcomer rock bands as well as a healthy amount of returning favorites will highlight the Youth Pavilion at this year’s San Clemente Ocean Festival.

The first new rock offering will take place 1-2:15 p.m. on Saturday, July 21 with Stink, Inc. The San Clemente band made of a group of skateboarding friends, ages 8 to 12, describes itself as “punk rock for deviant children” on its Instagram page. The four-member group will put together a string of punk-rock hits that open the musical performances at the Youth Pavilion.

Issac Sotelo makes his Ocean Festival debut on Sunday, July 22 at 10 a.m., and then the stage on the south side of the pier really gets to rocking with a pair of Community Outreach Alliance (COA) performances.

Corey Angeli begins with a short pop rock acoustic set at 11 a.m. before grabbing his electric guitar. Angeli will team up with drummer John Tessin to form the band The Unknown to pump out some strong alternative rock.

Stick around at 11 a.m. because if punk or alternative isn’t your style, WhipLashX will hit you with some classic-rock jams. Jordanne Hamilton on vocals, Kyle Richardson on lead guitar, Tristan Chilvers on keyboards, synth and rhythm guitar and Chandler Chilvers on bass, rhythm guitar and keyboards join up with a second round of Tessin on drums to bang out the songs we all know.

Both The Unknown and WhipLashX formed out of the COA’s music outreach initiative helping the organization’s mission to stop teen drug and addiction problems and foster healthy activities.

Guillobel Brazilian Jiu-Jitsu Academy starts off Saturday with a demonstration of the martial art at 10 a.m. The San Clemente academy’s headmaster, Sensei Paulo Guillobel, is a world-champion black belt. The academy offers classes starting with 3-year-olds.

Following up at 11 a.m. is Hula Connection with a showcase of Polynesian dancing and culture. Now in its 15th year of operation in San Clemente, Hula Connection displays the Hawaiian, Maori, Samoan and Tahitian cultures. Hula Connection offers classes beginning with 2-year-olds.

Lake Forest’s Hard Core Fitness will have a kids’ event at noon on Saturday.

Sunday opens up with the Mermaid Parade as King Neptune and the mermaids visit the Youth Pavilion from 9-10 a.m.

Sunday’s entertainment closes after the COA performances with a two-hour show from the School of Rock house band from 1-3 p.m. Tustin’s School of Rock puts together the house band with children 17-and-under to perform in the local communities.

5 Steps to Ensure Your Legacy