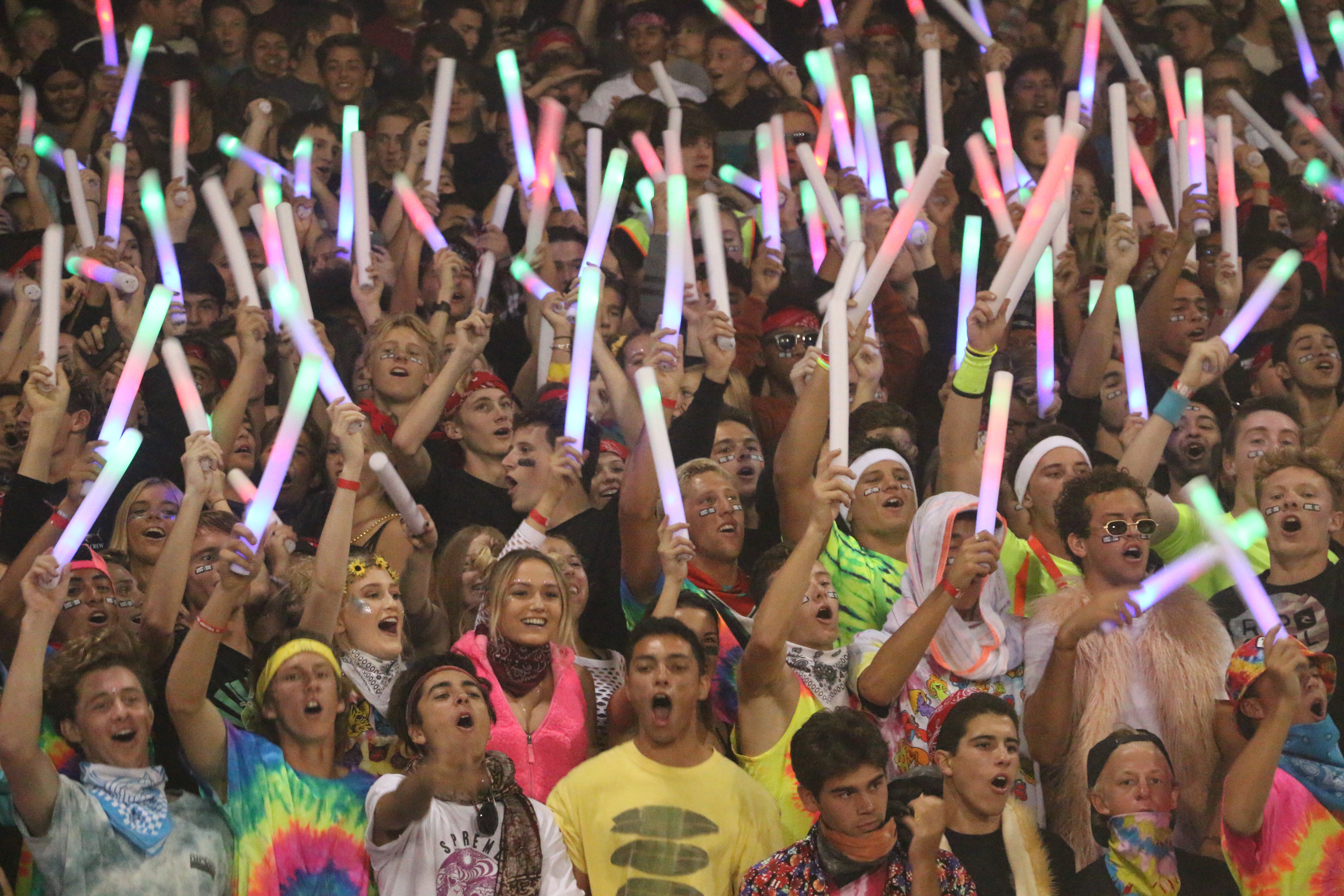 There are times when I get to a high school football game hours before kickoff and it’s just me, empty bleachers and a few parent volunteers milling around, setting up the snack bar.

But this season, something is different.

When I show up early to a San Clemente High School football game, I’m not the only one in the stands anymore. Sometimes as early as two hours before kickoff, there are dozens of students setting up lights, speakers and banners. They are getting ready for a party, and by the time kickoff rolls around, the place is packed.

High school student cheering sections are back in a big way in South Orange County, and San Clemente now has one of the best in the area.

The student-run spirit club, known as the “SCHS Loud Crowd,” is in charge of picking a theme and making sure their fellow students show up to games ready to rock. Themes have ranged from “blackout nights,” where everyone comes decked out in black clothes, to beach night, to American night.

They get there early, and they stay late, inhabiting the east side of the home stands, which they’ve dubbed “The Abyss.”

I’ve covered San Clemente football for four years, and while there have been good showings from the student sections in the past, I haven’t seen anything like this year’s effort.

The Loud Crowd invested in smoke machines and laser lights, which go crazy every time the Tritons score, which is to say they’ve been put to good use this season. They have special cheers and chants they break out for each game. The excitement builds up to a fever-pitch just before the Tritons take the field, when the whole section sways back and forth and stomps their feet as one.

Sitting in the press box, it sometimes feels like the stands at Thalassa Stadium might give way to the noise.

Seniors Roberto Medrano, Kurt Crapo, Brigham Maready and Blake Birmingham are the masterminds behind the Loud Crowd. They felt Triton football games could have a little more energy in the stands, and brainstormed ideas on how to make the games feel more like an experience for students. What they came up with involved reaching out to other clubs and groups at SCHS, like the marching band and cheerleading squad.

The band used to sit on the west side of the bleachers, opposite the student section. Now, they have bleachers set up on the track that face The Abyss. Both the cheerleaders and drumline will do choreographed performances in front of the students during games.

“It’s brought so many different people together on campus. Before the season, cheer, the student section and the marching band were kind of separate, whereas now we’re one combined group,” Crapo said. “When we were separate we weren’t that strong but when we came together, it’s just made something incredible. Everyone is so into it, and we all support each other.”

Students in The Abyss may be having fun, but there is also a reason behind the madness. They want the Tritons to win, and they want to do their part in making sure San Clemente has a home field advantage.

Tritons’ head coach Jaime Ortiz, along with the players, has routinely praised the Loud Crowd’s efforts this season. The student section’s involvement fits in perfectly with the “One town, one team” mantra, which has come to define SCHS.

“We’re kind of like a 12th man almost,” Crapo said. “It really helps our team perform and motivates them.”

The Loud Crowd holds weekly meetings, where they decide on themes and come up with new ideas. They also analyze their performance on film, just like the football team. They have a camera recording them and they use clips to review what Loud Crowd members did right, or wrong, during a game. It’s a fun exercise, although it’s mainly just for laughs.

The Loud Crowd leaders all attributed the sharp uptick in participation at games to the high level of school spirit at SCHS. It starts with the seniors, they said, and trickles down to the underclassmen. If enough people are talking about it and having fun, more people will show up. The group utilizes social media to help get the word out and their Instagram account has over 700 followers.

The Tritons played their homecoming game on Oct. 21, and the Loud Crowd had its best showing of the season. San Clemente needed a victory over visiting San Juan Hills to jump into a share of first place in the South Coast League. The energy was high, thanks to a capacity crowd, and the team came away with the important win.

Afterwards, as fans trickled out of the stadium, the student section serenaded the team with a version of Biz Markie’s famous hip hop song “Just A Friend,” but with a San Clemente twist attached. You’d have thought their voices would be hoarse, that they’d have no energy left after three hours of full-throttle cheering and singing. But there they were, saving their best for last.

“Oh S.C. you … You got what I need! So all you girls and boys, stand up and make some noise!” the students belted out, their voices washing over the field, carrying all the way down Avenida Pico to the beach and into the night.