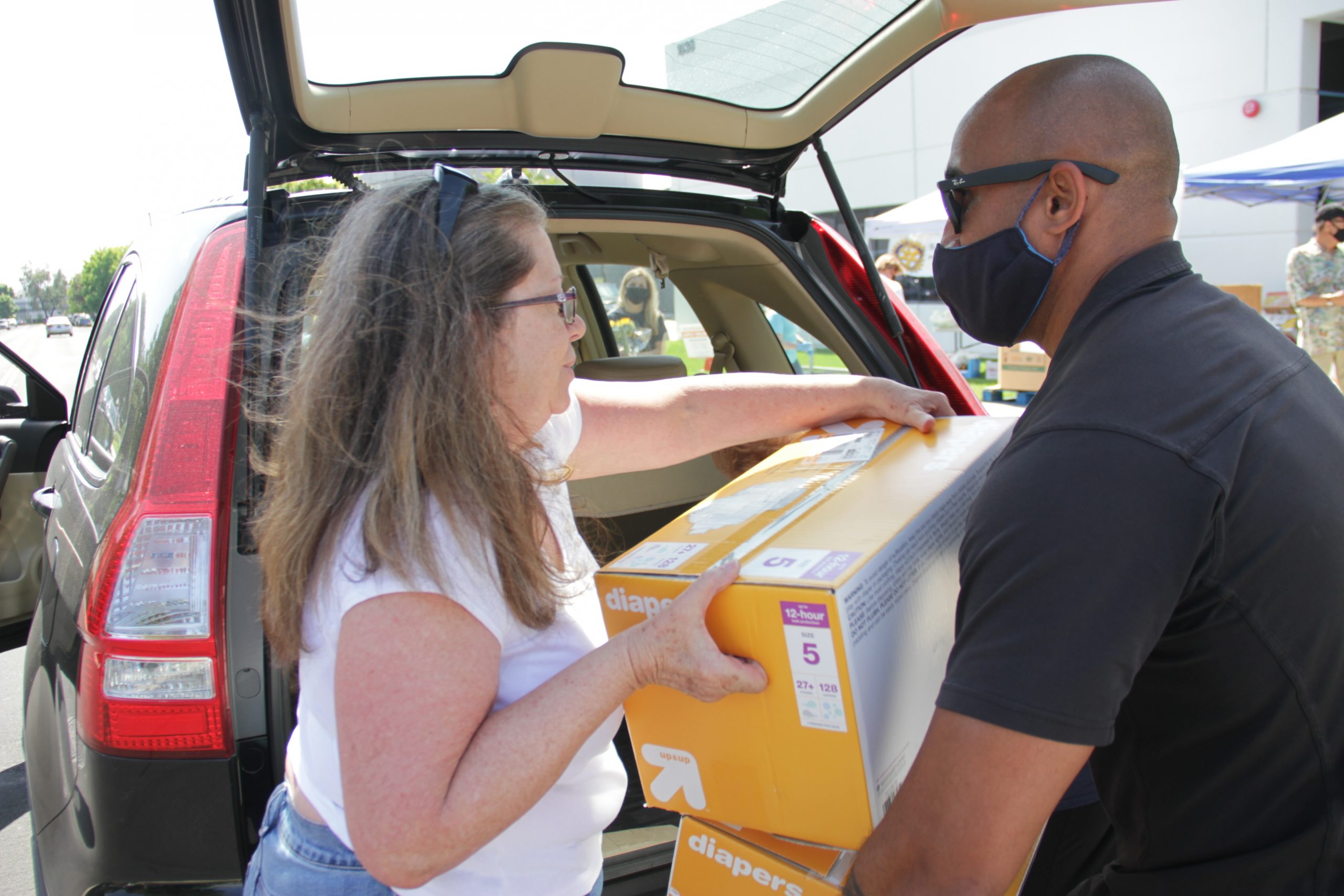 Dozens of community members and Rotarians came out to Family Assistance Ministries’ headquarters in San Clemente on Friday, June 19, to participate in a donation caravan, delivering food, sanitation supplies and other goods to help keep the nonprofit’s pantry stocked through the public health crisis.

An alliance of rotary clubs from San Clemente, as well as from Dana Point, Mission Viejo and San Juan Capistrano, led the socially-distant caravan from the San Clemente Target to FAM, where volunteers unloaded the bags and boxes of donated foods and supplies from vehicles.

“We all just got together and bought some goods FAM needs,” said Tyler Boden of the San Clemente Rotary Club. “In these times, it’s kind of hard to have these in-person community service events, and so we were just lucky to have an idea to do a caravan where people don’t really have to get out of their cars to be able to do community service.”

The nonprofit FAM, which provides help to families and individuals in need who are on the brink of becoming homeless, has seen a 110% increase in people seeking assistance from FAM since the start of the pandemic, according to FAM Chief Development Officer Mary Purdue.

Because of COVID-19, Purdue said, the nonprofit has experienced a 55% decrease in the amount of food it’s been able to receive from grocery stores every day, as well as a 90% reduction in volunteers.

“Of our 361 weekly volunteers, 90% were in the at-risk category, so it was a perfect storm,” she said, before noting that others in the community have stepped up to help fill the void. “But little by little, families in the community who were home with their kids—moms and dads, kids—were starting to come in and help in this time of need.”

Robert Burns, a past president of the Rotary Club of San Clemente, said it was amazing to see the breadth of products that were donated to FAM, such as canned and non-perishable foods, hand sanitizer, paper towels and diapers.

“The situation has hit everybody, so we’re very proud of the outpouring and support we’ve seen,” Burns said.

More than 1,600 pounds of food were donated to FAM this past Friday, according to the nonprofit. FAM also received 1,526 packages of diapers, 2,740 packages of wipes, 106 packages of toilet paper and 137 bottles of hand sanitizer. More than $2,000 in monetary donations were given to FAM as well.

The idea for the caravan, Burns explained, started with the local rotaries—San Clemente Rotary and the San Clemente Sunrise Rotary. But it wasn’t long, he said, before the rotaries from San Juan Capistrano, Mission Viejo and Monarch Beach asked to help.

“Everybody else was saying, ‘Hey, we can do this, too,’ ” Burns said, adding: “There’s a lot of people who want to give in certain ways, so this is a small way. The response has been amazing, because it’s their small way of saying, ‘I can provide a solution.’ ”

Boden noted that the San Clemente Rotary wants to continue supporting FAM and is considering making the caravan a regular event.

Expounding on that thought, Burns said the club is also looking at ways to help FAM raise cash to purchase new trucks.