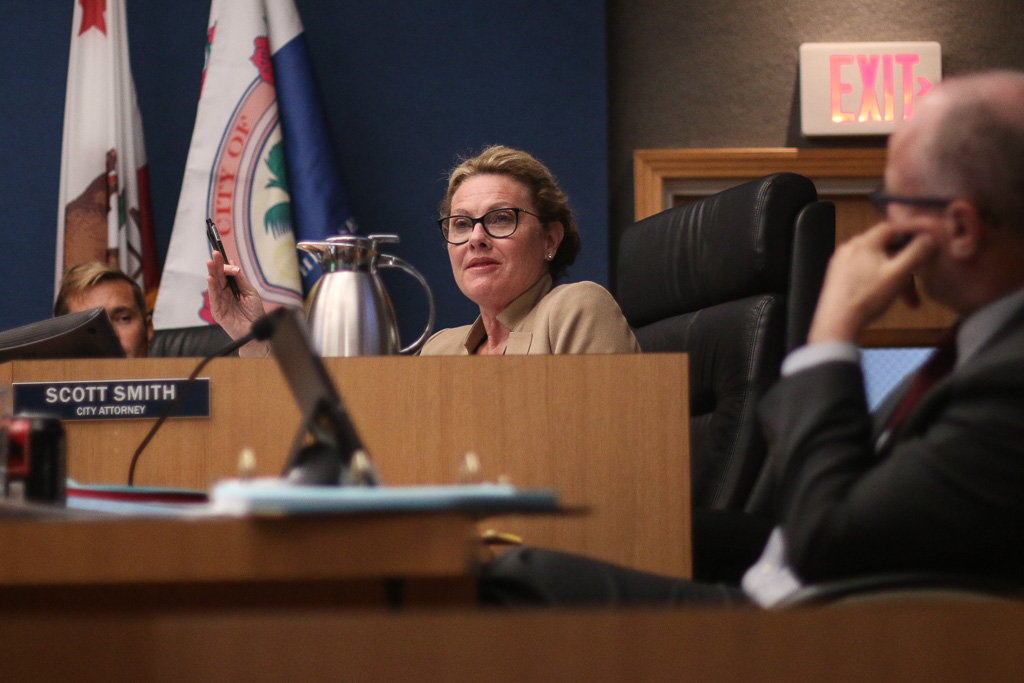 Anthony Rubolino is calling for Councilmember Kathy Ward to be removed from her positions of leadership on council, claiming Ward attempted to “destroy his character,” among other reasons he believes she is unfit to serve the public.

The 41-year-old local resident addressed San Clemente City Council on Tuesday, May 21, with his story, which was recorded along with the entirety of the meeting on YouTube.

Rubolino explained that he was reprimanded by authorities last year after he wore a machete holstered to his hip when he spoke at a San Clemente Council meeting on March 6, 2018.

Rubolino reiterated that he had used the blade as a prop to give councilmembers a visual of the kinds of derelict activities seen among transients new to town at that time—in particular, a man who people saw carrying a machete in the North Beach area.

The day after the March 2018 meeting, Rubolino was confronted by the city’s then-Police Chief Mike Peters, who told him that bringing a machete into the council chambers was against the law.

Rubolino said he had been informed by the officer prior that it was legal to carry a machete in public, but the resident told the chief he didn’t realize it was an infraction to bring it inside the council chambers.

Rubolino apologized to authorities, and they let him off with a warning not to do it again. This was confirmed in an email from Peters.

Ten months after the incident, councilmember Ward filed a police report on January 11 with the Orange County Sheriff’s Department, citing her concerns about Rubolino, who works as an occupational therapist in Oceanside.

In the report, Ward told police she felt “uneasy” about Rubolino, who “frequents the city council meetings.” When police asked why, Ward described the March 6 machete incident. She said in the following months, Rubolino had mentioned her name on Facebook leading up to the election, but said the context had been strictly political. She also said he looked at her several times during his speech to council on Dec. 4, in which he brought up the machete and made her feel nervous.

“Kathleen said she had been thinking about the machete Anthony brought into the city council meeting, and that she was getting a physical ‘reaction’ from it,” the police report read.

The report also noted that Rubolino has never spoken to Ward personally, and that Ward admitted the two have had zero contact outside of city council meetings or social media forums.

Rubolino, who has not brought a machete to a council meeting since the time he used it as prop, also confirmed with police that any interactions he had with Ward were strictly political.

“This is an elected official going after a private citizen,” Rubolino said to the four councilmembers at a recent meeting. “By filing the police report, Kathy attempted to intimidate me into not speaking at city council—that is my belief.”

Rubolino, who has lived in San Clemente since 2010, went on to say that Ward attempted to paint him as an unstable, dangerous individual, which could have posed a threat to him, his family and his career.

“This is unacceptable behavior of an elected official,” Rubolino said at the May 21 council meeting. “This was a complete waste of the Sheriff’s resources.”

Ward emailed the Times and provided the same comment she provided the Orange County Register. Ward said, “It is surprising that someone who brought a weapon into a city council meeting would publicly announce he had been reprimanded by the sheriff for breaking the law. My report to the sheriff was confidential, and on that I have no comment.”

On a separate matter, in March, the “John and Ken” radio show on KFI AM 640 was starting to give airplay to the homeless situation in North Beach. At the time, the city was being criticized for not doing enough to address the intensifying issue.

Ward reportedly agreed to do an interview without consulting the rest of council.

Just after midnight on Thursday, March 21, Ward sent a private email from her iPad to the show’s producers with the subject line “Homeless in San Clemente.”

In her email, Ward wrote, “Our Council cares very much about the situation. It wasn’t until the sheriff’s ‘wussed’ out on us that programs stopped working.”

Later that day, parts of Ward’s email were read on air on the John and Ken show.

The city allegedly caught wind of the story and put the brakes on the interview. Ward wrote an official letter that was sent by city clerk Veronica Ferencz, explaining that she couldn’t do the interview due to pending litigation the city was in regarding homelessness.

In response to Ward calling the sheriffs “wusses,” Lt. Edward Manhart, San Clemente’s police chief, replied in a text message to the Times.

Lt. Manhart said, “The comment was not appreciated, but the deputies and administrative staff in San Clemente continue to be professional and productive in providing the highest level of service to the residents. My concern as the Chief of Police Services is the ability to attract and retain people to work in the city. Having a supportive city council makes that much easier.”

Rubolino admits he hasn’t agreed with Ward’s political agenda for quite some time, but felt his First Amendment right to petition government for redress of grievances—without fear of punishment or reprisals—had been violated.

He said he felt intimidated by having to make a statement with a deputy addressing Councilmember Ward’s claims in the police report. He also worried other people would fear speaking at the dais due to Ward’s actions.

“It was a political move to silence me,” Rubolino said. The John and Ken show picked up Rubolino’s story on Friday, May 31. He spoke on air at 4:30 p.m. and shared his concerns on the matter.

The reason he brought it to the council’s attention: “I wanted to make sure Kathy Ward can’t do that to anybody else ever again. How can people have confidence in her as an elected official if this is how she acts?”

In a letter to Mayor Pro Tem Dan Bane and Councilmember Laura Ferguson, Rubolino urged council to consider Ward having to recuse her vote for an appointment to fill the vacant city council seat. He also urged council “to consider a censure to express formal disapproval of her actions and to immediately remove her from any and all appointments, committees, or positions, to further prohibit any additional damage from occurring.”