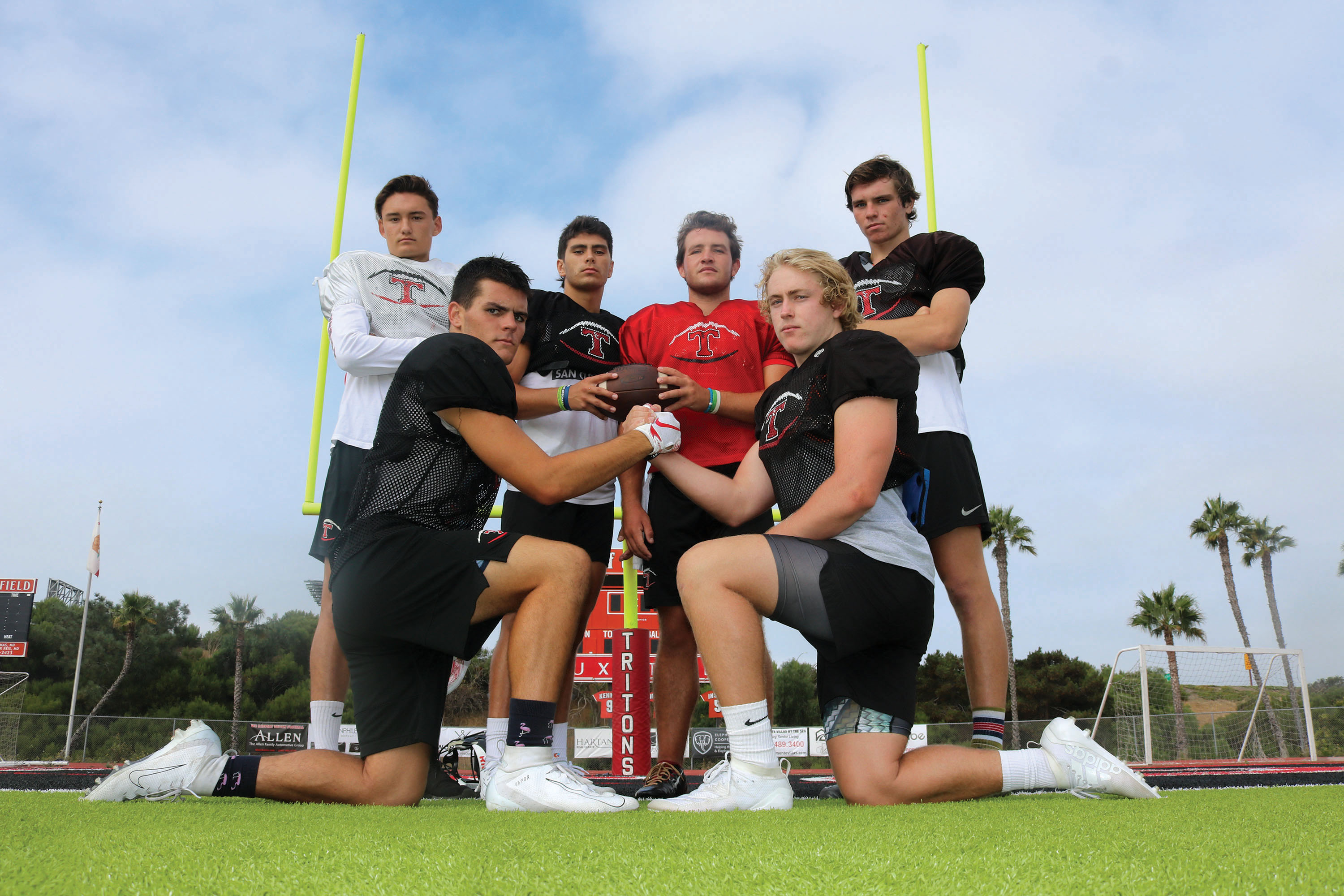 Words and Photos by Zach Cavanagh

In our annual San Clemente High School football preview we delve into everything you need to know about the upcoming Triton season. Scroll through the PDF version of this week’s issue HERE for more photos and interviews.

Last season, the opening question of this season preview was “Where can they go from here?” The same can be asked of the San Clemente football team entering the 2019 season.

Last year, the question was posed as could San Clemente ever break through the seemingly unbreakable barrier of Mission Viejo and the CIF-SS Division 1 playoffs? Optimism always springs eternal, but everyone involved knew it would be the toughest of tasks.

Well, San Clemente did it.

The Tritons beat Mission Viejo for the first time since 1999, in unimaginably thrilling fashion, and won their first South Coast League title since 1999. San Clemente even broke through in the Division 1 playoffs in a first-round win.

Even though the gap between the Tritons and the level beyond was evident in their second-round loss to then-national-No. 1 St. John Bosco, the San Clemente program had elevated its ceiling.

Now, after the great accomplishment, the burden of expectation arrives—the anticipation of an encore.

Can San Clemente beat Mission Viejo again? Can the Tritons win another league title? Can they go undefeated? Can they push further in the Division 1 playoffs?

With the advent of a new CIF-SS playoff format, San Clemente’s first CIF-SS title since 2016 is a worthy aspiration.

So, yes, for those doing the math, before a down is even played this season, those top 24 teams, including San Clemente and Mission Viejo, are guaranteed a CIF-SS playoff berth.

“Every team makes the playoffs,” San Clemente coach Jaime Ortiz said. “It would’ve been nice if there were more teams to put some pressure on teams (with a possibility of missing the playoffs). We’re excited to fight for that Division 1. I know our kids are excited about the opportunity to win a league championship.”

A league championship is probably the only door to a Division 1 spot for San Clemente, and that will be tough with an on-the-rise Tesoro in the league opener and a reloaded and motivated Mission Viejo waiting in the season finale.

However, a strong season and a top spot in Division 2 could put the Tritons in a favorable position. It would also be familiar territory, as San Clemente claimed its first and only CIF-SS championship in Division 2 in 2016.

With 32 graduates gone from last year’s group, the Tritons have plenty of questions to answer before that, and there will be plenty of tests to see if this San Clemente team has the mettle to push through once again.

Graduation hit San Clemente the hardest on the offensive side of the ball.

From Ortiz to senior quarterback Drayton Joseph, the repeated mantra is “next man up.”

While there was competition in camp, Joseph is likely the next player to step up and inherit the mantle of the Triton quarterback. Following a line of accomplished QBs including Brendan Costello (Oklahoma State), Jack Sears (USC), Sam Darnold (USC, New York Jets), Travis Wilson (Utah) and Chase Rettig (Boston College), Joseph has one thing none of those NCAA Division 1 predecessors had: a win over Mission Viejo.

“I told Jack Sears, don’t be Sam Darnold; be Jack Sears,” Ortiz said. “Go be yourself, and don’t be someone you’re not. I think that’s something Drayton did well against Mission last year.”

Joseph relieved an injured Costello in the second quarter and led the comeback against the Diablos with a quick passing game. As a golf commit to the University of San Diego, you could say Joseph is working his short game with the San Clemente offense.

“Offensively, we’re a quick-tempo, quick-passing team,” Joseph said. “We don’t have a lot of time. As for getting down the field and making big plays, that’s very limited. Our offense is very catch-and-throw, catch-and-throw, and we excel at that.”

Joseph is taking tips from the San Clemente quarterback lineage as well. Joseph said he worked on his speed in the offseason, as the last four Triton quarterbacks have been dual threats and have excelled. Joseph said he also FaceTimes with Costello in Oklahoma for “a couple hours a day” to go over defenses and the like.

There will be plenty of help from the skill positions, with seniors Preston Rex and Cian Smith at receiver. Rex is an athlete who will make an impact on both sides of the ball for San Clemente, and Smith will be expected to help stretch the field.

Out of the backfield, junior James Bohls will be relied upon a lot early as the passing game finds its footing. Bohls has the size and blistering speed. Ortiz said the Tritons will use Bohls to their advantage and be a heavier team when they need to be.

The key will be getting the offensive line together as a cohesive unit. Junior Ryland Swarthout is the lone returner who will lead the group up front that lost a lot of experience from last season. Ortiz said he was rotating a couple of guys in and competing for jobs on the line in camp.

Senior kicker Cole Thompson will also be a weapon for San Clemente. Ortiz said it’s “Touchback City” when the Navy commit lines up his leg. Nearly every kickoff should reach the end zone, and the Tritons will have a lengthy field-goal range.

Defense was a rough spot in the first half of last season, but Ortiz and his staff retooled the defensive look just in time for league. The changes paid off in spades, especially in the Mission Viejo game, where the Diablos’ passing game was stifled and a potential go-ahead two-point attempt was stuffed in the final minutes.

Many major players who spurred on that second-half success return.

Senior Trenton Brail moved from strong safety to linebacker during that change, and Brail was much more effective as a physical presence near the line of scrimmage. Fellow linebackers senior Trey Torticill and junior Caiden Robertson also provide the attitude and physicality.

Defenses are usually ahead of the offenses to begin the season, and the Tritons will need that, as the passing game finds its groove. With another grueling schedule ahead, San Clemente can’t afford the same early defensive letdown as a year ago.

With a playoff spot already guaranteed, there’s no need for San Clemente to shy away from a tough schedule.

While the early results didn’t come for San Clemente last season, there’s no arguing that once they got the defense turned around, they were more than ready for league play and a Division 1 playoff test. That’s a credit to Ortiz and the schedule.

“We’re playing some high-level teams,” Ortiz said. “That’s a good test. Last year, the games that we lost, those games got us ready for the league championship game. We’re going to test ourselves. I’m not a fan of scheduling easy games.”

San Clemente again opens with a three-game run against San Diego’s elite Avocado League, with trips to Oceanside and La Costa Canyon sandwiched around a game against reigning league champion Torrey Pines at SCHS. The only new opponent on the schedule comes in the fourth game against Lincoln of San Diego, the San Diego Division 2 champion.

The welcoming of Orange County competition doesn’t lower the bar for San Clemente, with games against powers Edison and Corona del Mar and, of course, the South Coast League. San Clemente opens league with their Homecoming game against Tesoro on Oct. 4 and the finale at Mission Viejo on Oct. 25.

“It starts with each game,” Joseph said. “If we take one game at a time and one play at a time and build our way up, I think we’re going to be prepared to play (Mission Viejo) this year. It’s going to be a great battle for a league championship this year.”

San Clemente will fight to play that encore.