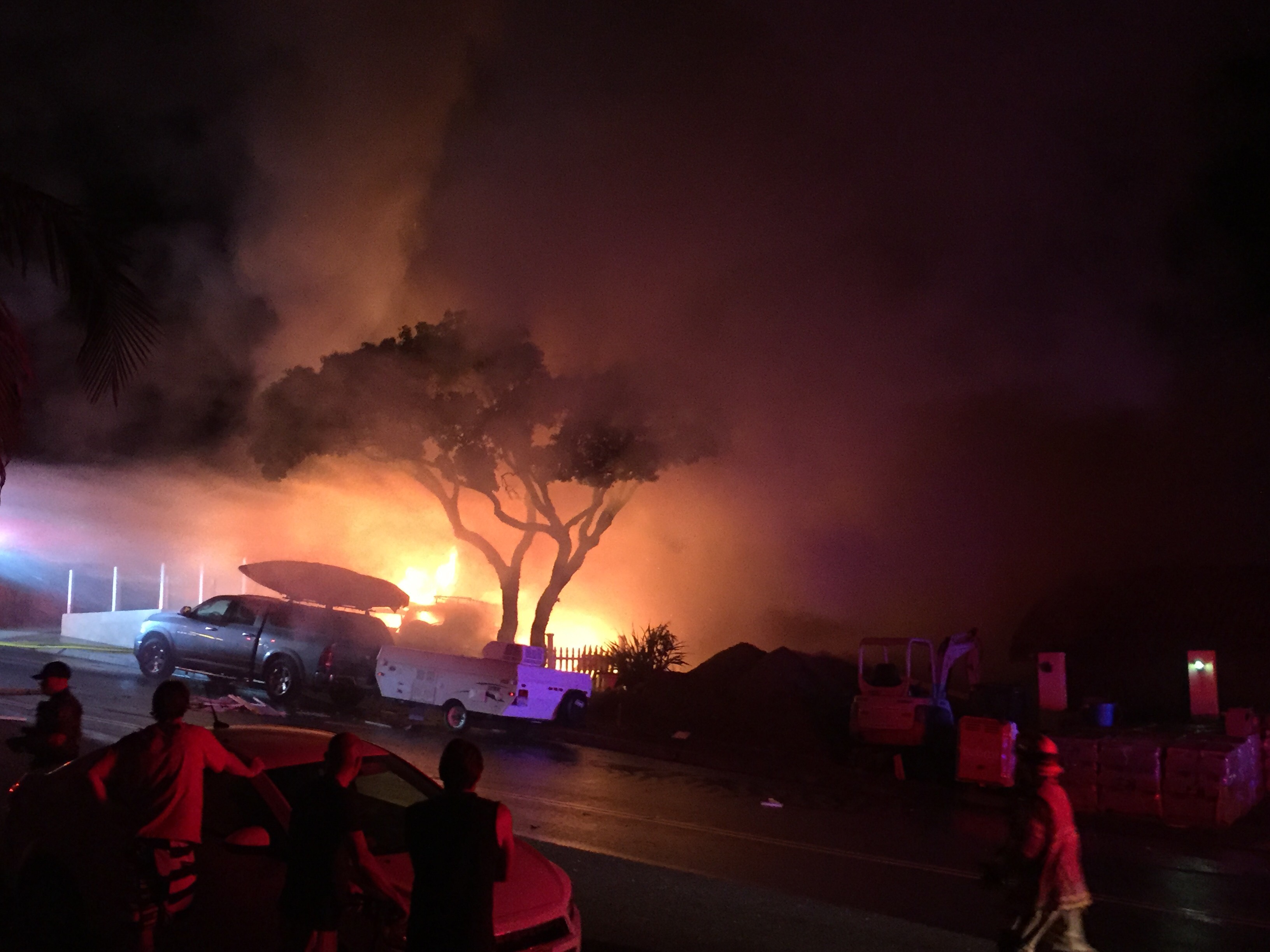 A ruptured gas line that caused an explosion inside a garage of a San Clemente home at around 3 a.m. on Aug. 24 on the 100 block of Avenida Dolores is still under investigation.

Orange County Fire Authority (OCFA) officials said there were no injuries in the explosion. A man and a woman who were living inside the home of the garage had only moments to escape out their back door, as the explosion caught the home on fire and blocked one of their exits.

The explosion of the single-story home’s garage was so massive that it spread debris all over the street, according to nearby residents. Almost nothing was left of the structure except the foundation and burnt pieces of it.

Because the gas line explosion took place behind the utility meter, SoCal Gas and OCFA had to shut it off by digging under the home’s driveway and manually stop it, said OCFA spokesperson Capt. Larry Kurtz. The gas line still burning as of 7:30 a.m., but it was reported shut off by 8 a.m., Kurtz said.

“We don’t know what caused the gas line to rupture at this time,” Kurtz said. “We have to shut off the gas line before we can investigate further.”

A home adjacent to the garage and three vehicles were also damaged, with the vehicles being towed away before crews could try to access the gas line.

Diane Alajoki, one of the residents of the home, said she was getting ready for a camping trip when the explosion took place.

“I laid down just before getting in the shower, and this explosion happened,” Alajoki said. “We saw flames and basically had a few minutes to get out. We went out the back slider (door) and escaped with our lives and our dogs.”

The man and woman’s German shepherd was found immediately, and the other dog was later found unharmed.

“We’re a little bit in shock, obviously very sad, and we lost a lot of things, but not our lives,” Alajoki said.

John Richwine, a resident who lives nearby, said he was also awake when the explosion took place but didn’t realize what had caused it.

SoCal Gas crews help shut off a ruptured gas line that caused an explosion in a garage on Thursday morning, Aug. 24, on the 100 block of Avenida Dolores. Photo: Eric Heinz

Flames could be seen from half a mile away after a ruptured gas line caused an explosion inside a garage on the 100 block of Avenida Dolores in San Clemente early Thursday morning, Aug. 24. Photo: Courtesy of Susan Goggins

SoCal Gas crews help shut off a ruptured gas line that caused an explosion in a garage on Thursday morning, Aug. 24, on the 100 block of Avenida Dolores. Photo: Eric Heinz

Diane Alajoki, left, is comforted by a friend after her garage exploded from a ruptured gas line early Thursday morning. Aug. 24. The cause of the rupture is still under investigation by OCFA. Photo: Eric Heinz

Melissa Mormile, who lives just down the street on the west side of Dolores, said she heard and saw similar wreckage.

“There was a big boom, and we thought it was gunshots at first. Then you heard a few smaller booms like fireworks or some kind of ammunition; it rattled our entire apartment,” Mormile said. “My husband thought a car had run into our apartment building. We came out and it was huge. The entire thing was covered in flames. When the fire department was putting it out, you could tell that it was a gas fire because you could hear the sounds and see the way the water was hitting the flames.”

OCFA is still investigating the cause of the ruptured gas line. At 7 a.m., the burnt cars were towed away. City officials and SoCal Gas maintenance crews were onscene to inspect the gas line. About 30 firefighters responded to the incident.

People with Trestles Community Outreach, a neighborhood organization that deals with issues in south San Clemente, has started a GoFundMe page for the Alajoki family as they try to recoup their losses. Click here to go to the GoFundMe page.