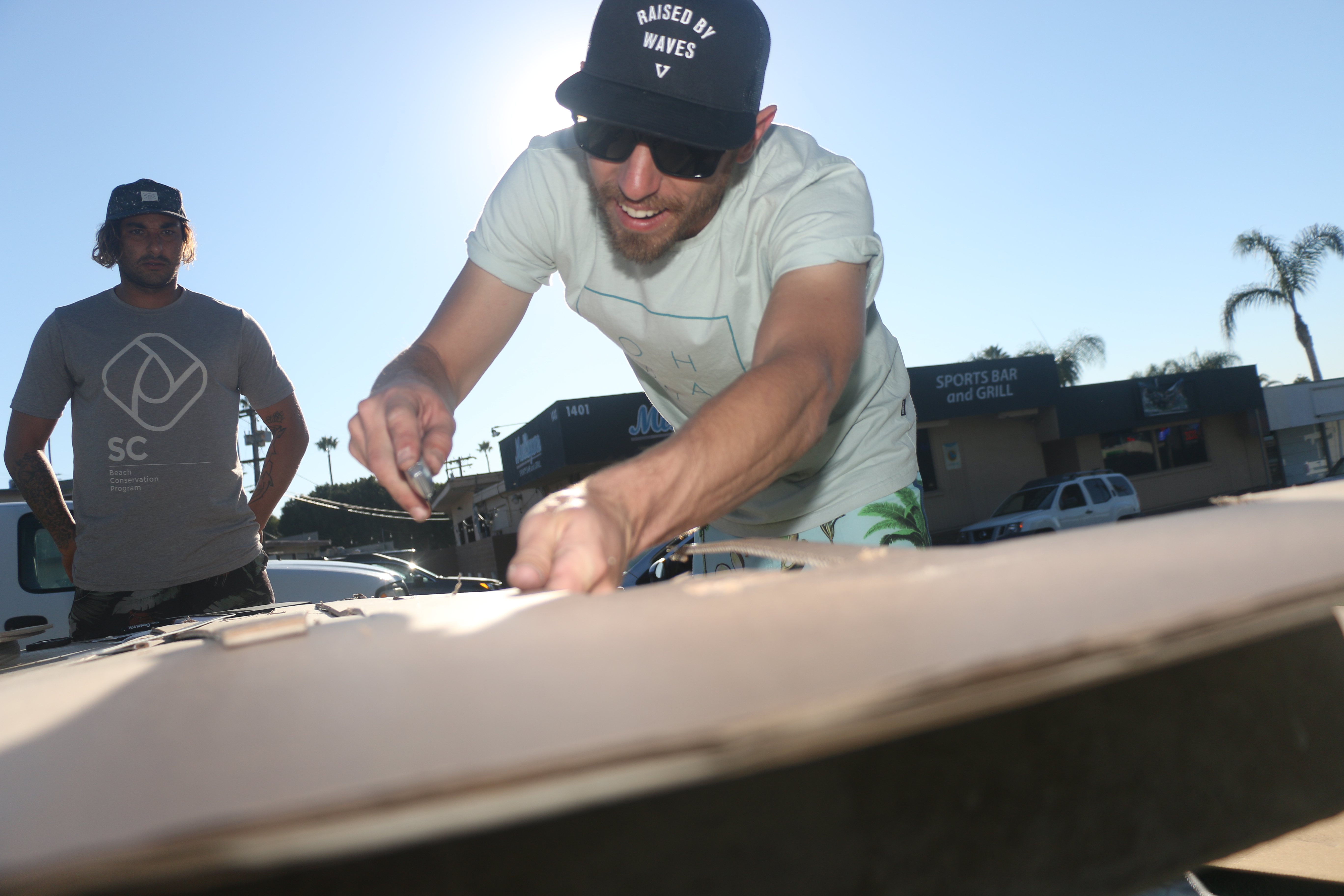 What: A Surfer’s Night for Environmental Discussion

François Jaubert makes specific cuts to a piece of cardboard he made into a surfboard on Friday, Nov. 4, in San Clemente’s surf ghetto. Photo: Eric Heinz

The surfboards made out of cardboard are basically translucent, as the outline of a man can be seen through the broadside of the board. Photo: Courtesy of François Jaubert

On Friday, Nov. 4, as the sun set on San Clemente’s Surf Ghetto in North Beach, a craftsman sliced through large pieces of discarded cardboard to make them into a surfboard. He made the device by cutting cardboard and harnessed their power by stacking them together.

François Jaubert is an architect by trade but wanted to find recyclable materials to turn into surfboards. Jaubert is originally from France but resides in Portugal, and he said he has been surfing for only six months but enjoys the sport.

Jaubert and Shon Miller, the director and founder of San Clemente Beach Conservation Program, met during an international design competition, Vissla, in which Jaubert was recognized for his cardboard surfboard design. Miller then invited him to stay at his home in San Clemente.

Miller was at the competition representing the San Clemente Beach Conservation Program to reach out to people around the globe. The program emphasizes the importance of beach conservation and reduction of manmade waste. Miller said he has connected to people in Australia and other parts of Europe. One of the people he has spoken with made a surfboard out of agave and wood cedar.

“Vissla was a very good platform for me because I could get exposure for my work,” Jaubert said.

Through a Kickstarter campaign, Jaubert said he was able to raise enough money to come to the U.S. and learn more about surf shaping.

Currently, he’s crashing on Miller’s couch until he returns to Portugal on Nov. 21.

“When I’m here, all I’m going to be doing is working,” Jaubert said. “I’m not going to be that guy who takes his Kickstarter money and just chills. The average salary in Portugal is about 600 euros (a month). It is pretty hard for me to afford such a trip.”

Jaubert said he has also used crowdfunding to support his hobbies in making recycled-material surfboards. The designs are made with several strips put together with resin and regular glassing; about 95 percent of the board is cardboard.

Jaubert said there isn’t much surfboard manufacturing in Portugal. The majority of the country’s surf products are imported.

“It takes a mind like his, that architect and artist perspective, to kind of come to realize things that are in plain sight because people are caught up in the industry and have to make the boards,” Miller said.

“I’m not saying bad about (the surf industry). It’s good. These guys are the inspiration for me,” Jaubert added. “It’s like being a bird and not knowing how to fly. I come here, and these are all the mother birds.”

Miller said the most positive thing he took from Jaubert’s speech is how he is able to look at how the SC Beach Conservation Program is trying to stop the source of waste so that beach cleanup efforts won’t be as critical.

“His speech was really inspiring,” Miller said. “He talked about how the majority of surfers aren’t high-performance surfers. It was right on track with what we need to be doing these days. They don’t need these high performance, professional short boards. There’s definitely a need for a board that’s for low-performance surfers.”

The boards Jaubert makes are a bit longer and broader than the short boards made of foam for exceptional performance.

“I think people should be able to make (surfboards) with what they have around them,” Jaubert said. “We’ve found more cardboard in a few days around here than I found in two, three months in Portugal. You just have to think about what’s around you, what’s cheap and what can float.”

There is a science behind all of this, Jaubert said. His process requires a lot of thought before he begins any type of shaping.

“You have to think about what material is most strong,” he said. “There’s enough material around you to do it. You can use coconuts, you can do tumbleweeds.”

Jaubert said he is not really a shaper, but he enjoys taking abstract concepts and putting things together to make them useful.

“I just bought about $20 in material this morning,” he said, which included a construction knife and some other tools. Drawing the surfboards, he said, is one of the most interesting parts of the process.

Ocean conservation is close to Jaubert as pollution may be most visible on the shores in Portugal. According to a study in 2011 at Universidade Nova de Lisboa in Lisbon, 90 percent of pollution on the Portugal’s coastline is from plastics.

Jaubert said it’s easy to identify where the debris comes from, and much of it is from American products. Recently, professional European soccer clubs Real Madrid and FC Bayern Munich were reported to wear jerseys made from ocean waste. And photos of plastic “islands” are plentiful on social media sites.

Jaubert also wants to make boards out of old wetsuits, which also can contribute to ocean pollution.

“I’m very fascinated by America. You guys are making some of the most amazing surf boards in the world, but there’s lots of waste,” Jaubert said. “Maybe they could not export so much or not use so much cardboard, and if they don’t use the cardboard, they can give it to me. We want to make a recycle revolution.”

Jaubert said surfboards are very expensive in Portugal, going for about 800 euros a piece.

The durability of the board can be lifelong, Jaubert said, as long as people aren’t trying to take the board into crowded pipelines. Because they’re made of cardboard instead of foam, the boards are a bit heavier but move faster with the added air cardboard provides. Jaubert said these kinds of boards can make surfers think more about how they surf because of the weight of the board, not wanting to run into other sportspeople.

It takes him about five to seven hours to create the board from start to finish. It may not be something everyone can do at home, Jaubert said.

“Every time someone wants to do this, I explain to them my process, and it’s a lot of work,” he said. “I thought all morning about the shape. You have to study it a bit. It’s kind of a science. But I would love to travel and learn and make, and to collaborate with people and teach people how to make surfboards out of nothing.”

For more information about Jaubert and his work, visit www.beautiful.pm.

More information about the Vissla competition and innovators of the craft can be found at www.vissla.com