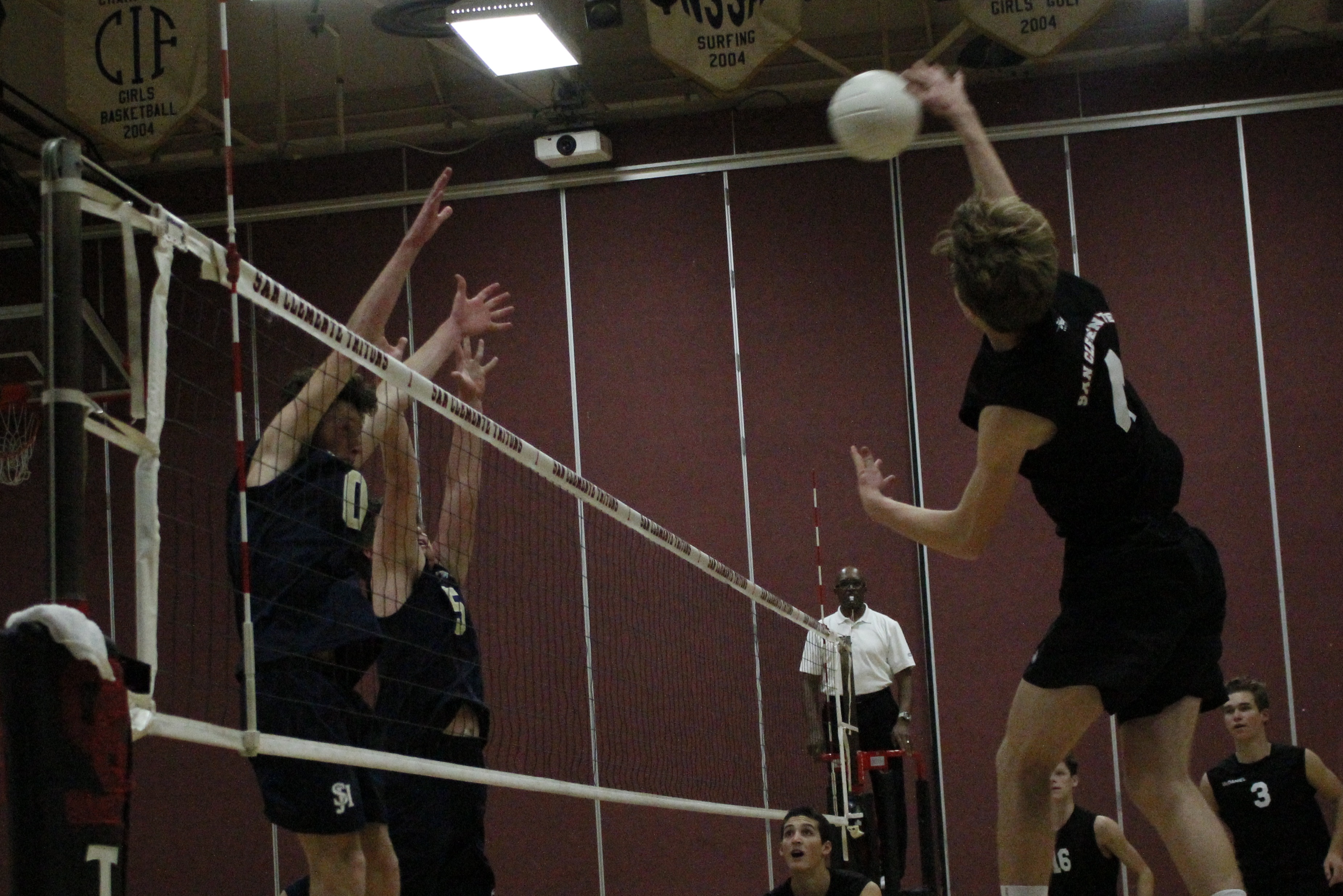 SAN CLEMENTE – San Clemente boys volleyball coach Ken Goldstone has been surprised by his young group’s 14-4 start to the season.

“Sometimes I wonder how we’re that good,” Goldstone said. “We’ve played well enough just to get by sometimes.”

Tuesday night seemed like one of those times as San Clemente survived a stiff test from San Juan Hills but earned the sweep, 25-21, 30-28, 25-20, in the Tritons’ first home match of the season and a Coast View Conference crossover game at San Clemente High School.

San Clemente’s Wyatt Eberle on the Tritons’ sweep of San Juan Hills,25-21, 30-28, 25-20, in their first home match of the season. Eberle led @SCHSTritons with 16 kills. San Clemente opens defense of its South Coast League title at home vs. Dana Hills on 3/27. pic.twitter.com/rPHX41P6f0

“I think we’re still growing,” San Clemente junior Wyatt Eberle said. “We didn’t perform to our best tonight. I think in upcoming games like Dana and once we get into league, you can expect much more from us. We’re still coming together as a team and growing. I’m still proud of how we played tonight.”

San Clemente is the defending South Coast League champion, but the Tritons lost nine seniors from that team. The Tritons open up the league title defense by hosting Dana Hills on March 27.

“We’ve just come together as a family,” Eberle said. “We’re all young guys. We’re learning how to play together and our chemistry is starting to increase. We feel really good. (Our expectation is) winning league.”

San Juan Hills (7-5) is in its first year under head coach Garry Currier and has pushed up to be ranked No. 5 in the latest CIF-SS Division 2 poll. The Stallions open Sea View League play on Thursday, March 22 at Laguna Hills.

“I think this team coming in with a new coach and a new mindset,” Currier said. “Just the mental errors, missing serves, hitting the ball on the tape, not communicating. Those are the things that are going to kill us.”

In the first set, San Clemente pushed out to an early 7-2 lead and led by as much as seven midway through. San Juan Hills cut the lead to three points, 23-20, but the Tritons closed out the set.

The second set was a see-saw battle that saw 21 tie scores throughout. San Juan Hills looked like it was going to fight back and make a real match of things with a five-point lead, 11-6, but San Clemente came back to tie the match at 13. The teams traded points down the stretch and played through six set points before the Tritons ended it, 30-28.

“We just couldn’t get any kind of momentum in that match,” Goldstone said. “We had some momentum then we’d miss a serve or hit one out. We just kind of killed ourselves a bunch of times. Even at the end (of the third set), we had an eight-point lead and we couldn’t close them out like I was hoping to.”

The teams were tight to start off the third set, but San Clemente kept San Juan Hills at bay and pulled away late. The Tritons finished the match with a 25-20 win.