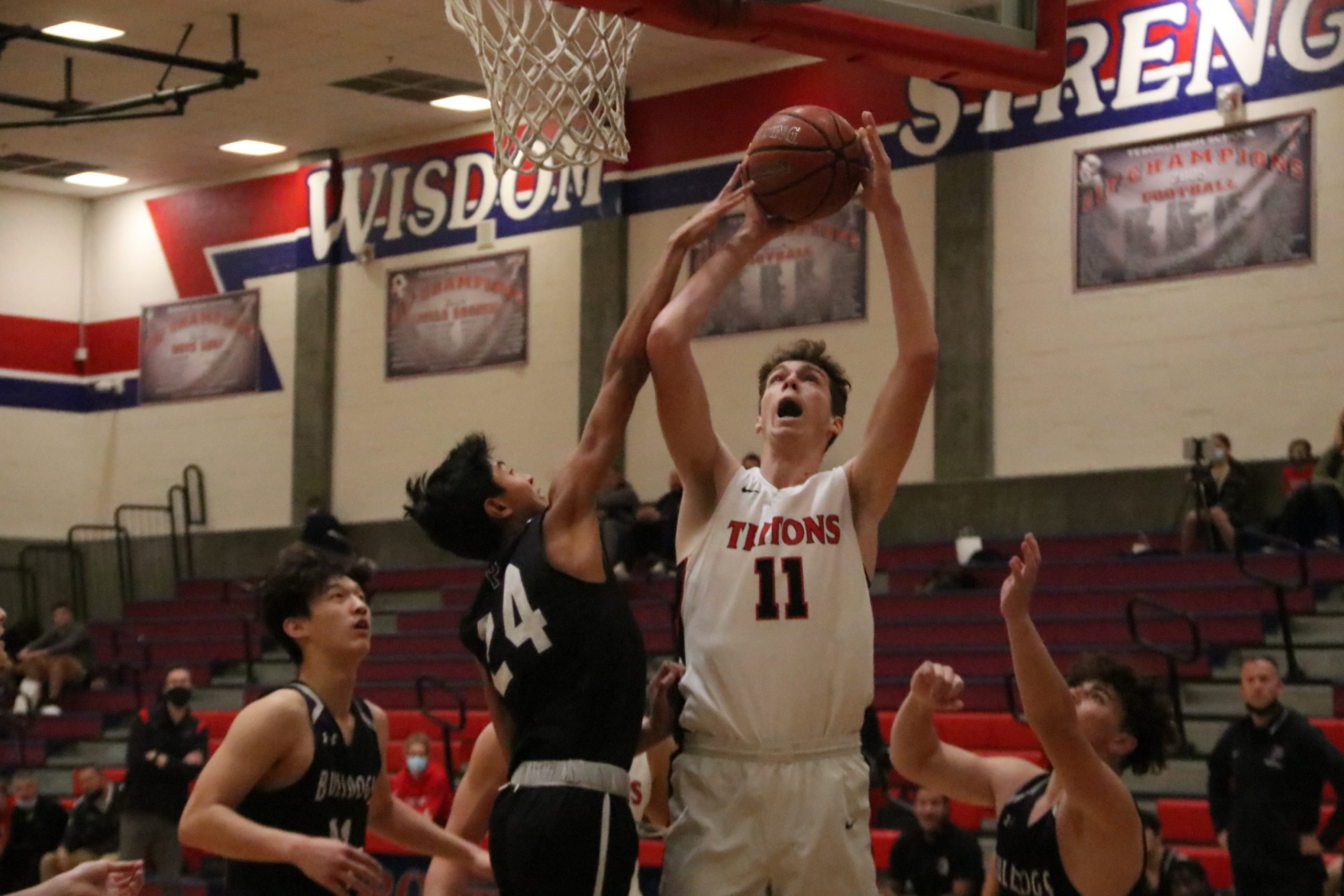 LAS FLORES – The San Clemente boys basketball team was playing just its third game in 17 days when it took the court in the North/South Challenge at Tesoro High School on Tuesday, Dec. 21.

Arguments are always made of “rust vs. rest” for big lay-offs like that, but for the Tritons it was a bit of both. San Clemente certainly started off the game rusty, but the benefits of all the extra practice sessions over the last two weeks shined through in the second half.

“Our defense was spectacular,” San Clemente coach Marc Popovich said. “The word I use to describe how we should play is ‘connected,’ and we were connected out there today defensively. We talked, we moved. We rebounded really well today, and that led to our transition.”

Senior Asher Gardiner led all scored with 20 points and added eight rebounds to be named the game’s MVP. Gardiner was helped down low with a 15-rebound effort from 6-foot-5, 225-pound senior forward Tanner Mehrens, as San Clemente (8-4) outrebounded Portola (7-5), 41-19.

“That’s Asher at his best,” Popovich said of his 6-foot-7, 220-pound forward. “When he’s able to get out and run, you see he can play in the post, he can play up top, he can drive. When he gets going in all phases, that really helps us out, and he gets easy baskets for us.”

Senior guard Alec Grace knocked down two 3-pointers and was second on the Tritons with 16 points. Senior guard/forward Charlie Spaeth had 10 points and made a team-high six of eight free throws.

San Clemente started the season 7-1, and the Tritons looked to be rolling thanks to its strong low-post game. However, San Clemente dropped three straight games to some tougher competition in the last two weeks.

Luckily for the Tritons, the losing streak transitioned into this less-populated portion of the schedule, which allowed Popovich to drill down on what his team needed to work on. Popovich has been pleased with the results, as the Tritons now own a pair of back-to-back wins against Yorba Linda last Friday, Dec. 17, and Portola on Tuesday.

“I think we’ve grown so much in the last two weeks on the defensive end,” Popovich said. “I think the guys are really starting to buy in. Then its just a matter of keeping up that momentum and improving each week. The team that wins league is the team that improves every week, and we have to do that.”

San Clemente has one last round of tournament play with the Tustin Classic on Dec. 27-30, and the Tritons open their defense of the South Coast League championship on the other side of the new year. San Clemente plays at Trabuco Hills on Jan. 5 and at Mission Viejo on Jan. 7.

The Tritons don’t play their first home game of the season until Jan. 14 against University.