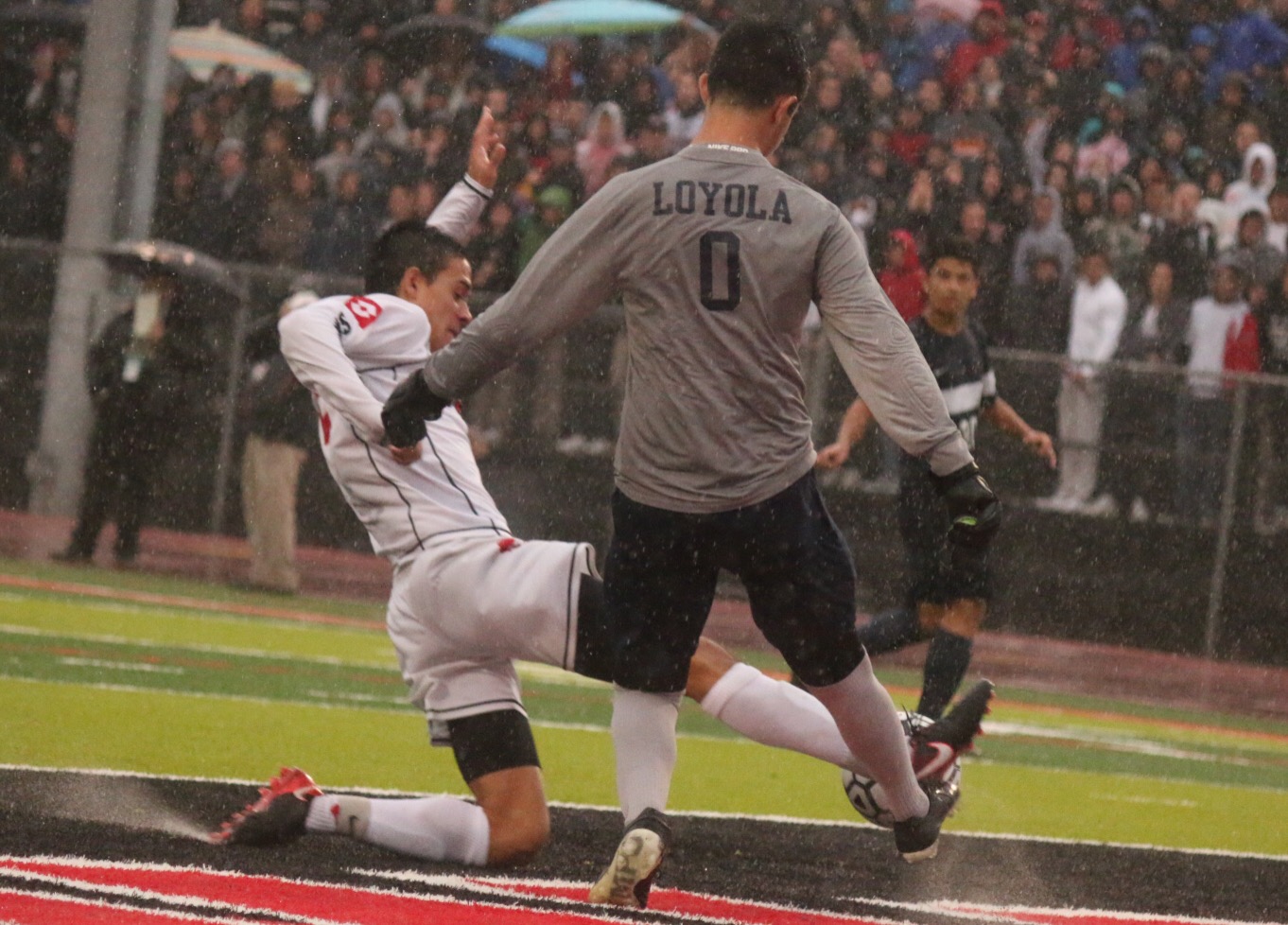 SAN CLEMENTE – The San Clemente boys soccer team took its second chance as far as it could.

After falling in the CIF-SS Division 1 semifinals, the Tritons found new life in a run to the CIF Southern California Regional Division 1 final. The No. 5 seed battled through a pair of road games and, with a stroke of luck, had earned home-field advantage in Saturday’s final.

On a cold and rain-soaked night in front of a packed crowd at San Clemente High School, the Tritons and Loyola exchanged set-piece blows into overtime where the run ended.

Loyola scored on a header from a long throw-in, nearly identical to its first-half corner kick, to put in the golden goal and defeat San Clemente, 2-1, in the regional final.

“I’m excited that we were here, but disappointed we didn’t pull it off,” San Clemente coach Mike Pronier said. “We wanted it. Credit to the boys and what that they did this season and the program as a whole. We were stoked to be back here for a third time in eight years. Loyola is a great program and we’ll get them again next time.”

Loyola won its third SoCal Regional title with previous wins in 2016 and 2014.

The Tritons finish the season at 19-6-6 overall and won the South Coast League title for the sixth time in eight seasons.

“Game in and game out, we probably had one of the toughest schedules in this area,” Pronier said. “We did nothing but improve. We hit our pinnacle in these last few games. It’s a credit to what we’ve done all year. It’s a credit to the coaching staff and the kids’ never-say-die attitude.”

San Clemente opened the game with the better chances.

Tristan Weber had a free kick opportunity that went a foot over the crossbar in the sixth minute and another in the 12th minute that the Loyola goalkeeper had to leap high between two jumping Triton forwards to negate the chance.

Loyola earned the large majority of the game’s corners and took the lead on one in the 14th minute.

A left-side corner was flung into the box and headed on net. San Clemente junior goalkeeper Ryan Kowarsch went for the punch, but the ball glanced off his gloved fist and into the net.

Kowarsch made a handful of key saves for San Clemente through the rest of the game and was terrific throughout the playoffs after coming in for injured senior captain Jake Carter to start the quarterfinals of the CIF-SS playoffs.

“He had played a game and a half going into our third playoff game against Warren,” Pronier said of Kowarsch. “He did lights out for every game we played. For a young man that had little to no experience and coming off the JV team last year, he was phenomenal over these five games.”

Weber tied the match on another set piece opportunity in the 30th minute.

On a right-side corner, Weber curled the ball over the defense and the Loyola keeper to hit the top left corner for a beautiful equalizing strike.

Through the second half, the physicality picked up as did the rainfall.

The Upland keeper had trouble controlling the wet ball, and in the 65th minute, Blake Bowen slid in to try and grasp the slim moment of opportunity. Bowen earned a questionable yellow card, but it was San Clemente’s best attempt down the stretch.

The Tritons made several promising crosses but couldn’t make contact in the box.

The game pushed on to overtime where Loyola eventually found the golden goal.

In the 97th minute, Loyola scored a near carbon copy of its first goal.

On the same end of the field and in the same spot, the Cubs used a long throw-in instead of a corner but found the back of the net on a header for the regional title.

“With the rain like this and as wet as it was, it was sort of about which ball was going to slip through and that was unfortunate.” Pronier said. “It’s one of those games again that go either way. I’ve had a lot of games in my years, but in regards to this group of guys, they always fought. I don’t think they lost it because they made a mistake. They lost because it was sort of just nature and the elements.”