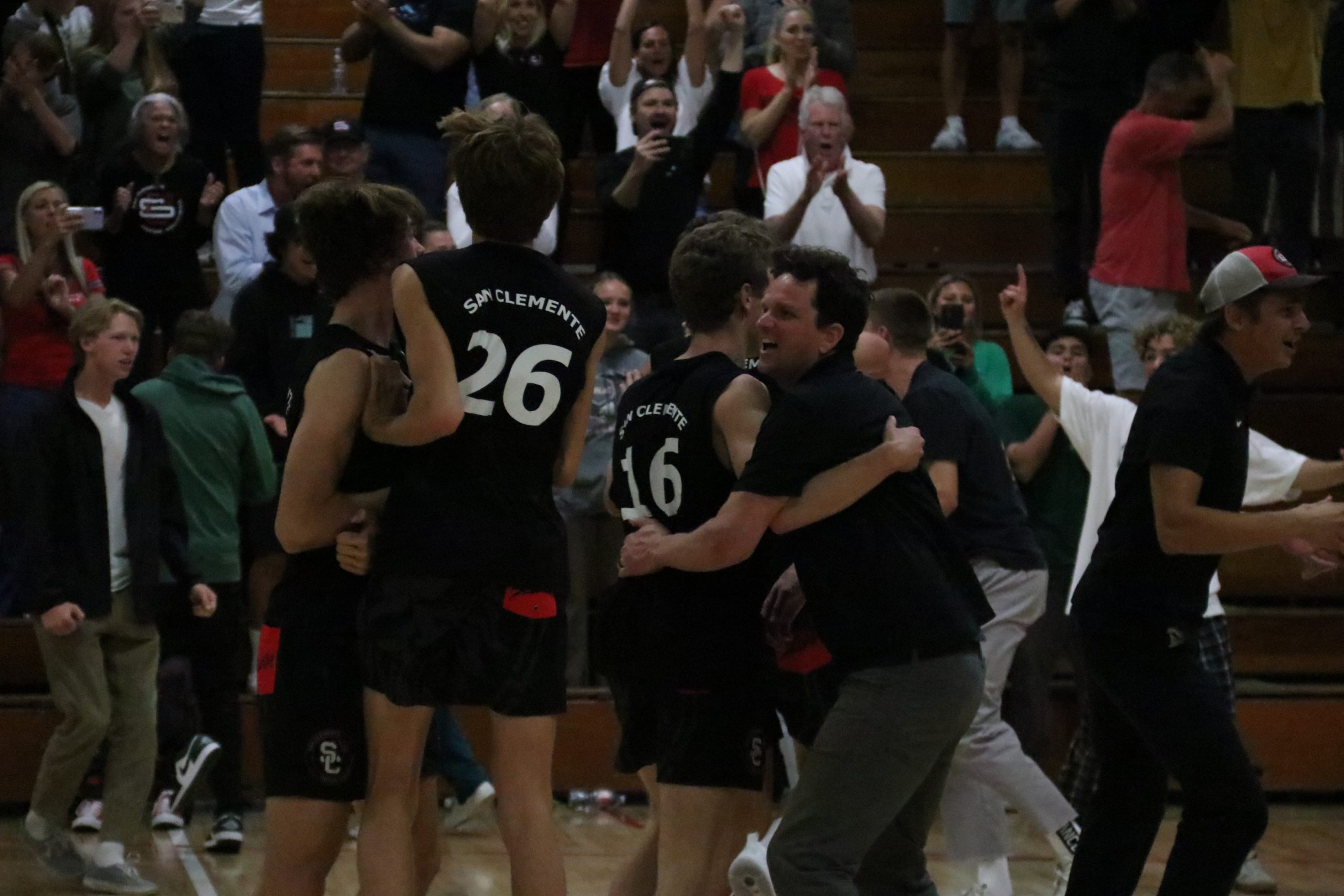 On a night when the San Clemente boys volleyball program honored former coach Ken Goldstone, the Tritons outlasted Tesoro in a five-set thriller to maintain the Goldstone gold standard.

“I think we just found our game,” San Clemente coach J Bisch said. “We were so many mistakes early on, giving them extra points. Our blocking was one of those things we’ve been working on in practice. When we play defense first, our offense comes pretty easy for us.”

San Clemente (16-10, 6-1) has earned at least a share of its third straight South Coast League title, and the Tritons can take the league outright with a win at Trabuco Hills on Thursday, April 21. Tesoro (14-7, 6-2) was in the driver’s seat after a five-set win at home over San Clemente, but the Titans dropped a stunner to Aliso Niguel last week to open the door for the Tritons.

“It’s a celebration of the boys and how hard they’ve worked,” Bisch said. “When you consider the fact that we start a freshman, two sophomores, two juniors and two seniors, that’s a lot of learning to become a cohesive unit. We aren’t just some club team that’s come into high school, and we’re playing. We had to learn.”

San Clemente’s senior class won a South Coast League championship in each of its played seasons, with the lone exception of 2020, when the season was canceled early on due to the COVID-19 pandemic.

“It’s cool for us seniors to be league champs all (three) years,” Concordia-bound senior Landon Seymour said. “I think that’s a really cool thing a lot of people don’t get to experience.”

In the previous 22 seasons under Goldstone before the longtime coach’s retirement prior to this season, San Clemente had won the South Coast League 13 times and never finished lower than second. The Tritons ensured that streak continued on Tuesday.

The opening set was a match unto itself, as Tesoro looked as if it would grab the early advantage with runs of 7-2 and 5-1. Tesoro’s lead at 15-8 forced a San Clemente timeout, but the Tritons charged back with a 9-2 run, which tied the match at 17. The opening set went on to be tied 13 times total, as San Clemente fought off five set points by Tesoro. Tesoro fought off three set points by San Clemente, before Luke Shanafelt nailed the winning kill at 32-30.

“Next point,” Seymour said of the Tritons’ mentality in the marathon first set.

“Pretty much,” Shanafelt continued. “Sometimes you don’t think about anything when you’re playing. You thing about siding out, siding out and making your serve.”

Tesoro came back strong in the second set, and while the teams were close early, with eight ties to 9-9, Tesoro took hold and won the set, 25-21, to tie the match.

The third set saw San Clemente grab an early advantage, but the teams would be tied seven times through the middle points of the set. Tesoro negated two set points by San Clemente and grabbed the lead in the match on its second set point for the 27-25 win.

With victory in its sights, Tesoro got sloppy in the fourth set. San Clemente dominated with a 12-2 run and won the fourth set going away, 25-14, to force the decisive fifth set.

“Our resiliency,” Bisch said of what stood out. “Since we played Tesoro last, we’ve beaten Mater Dei, we’ve beaten some really high class teams. We don’t get nervous about anything anymore. We just stick to our methods and our game. I wasn’t too worried about it. They were going to pull it out. They’re just too tough not to.”

The Tritons grabbed control of the tiebreaker with a couple of early aces for a three-point lead, 6-3, and held Tesoro at bay. The Titans negated two San Clemente match points, but the Tritons proved stronger to hold on to the set, 15-13, and take the match.

Tesoro entered the week ranked No. 13 in the CIF-SS Division 1 and 2 combined poll, with San Clemente at No. 16. A maximum of 12 teams can be selected to the Division 1 playoffs, which begin on Thursday, April 28.