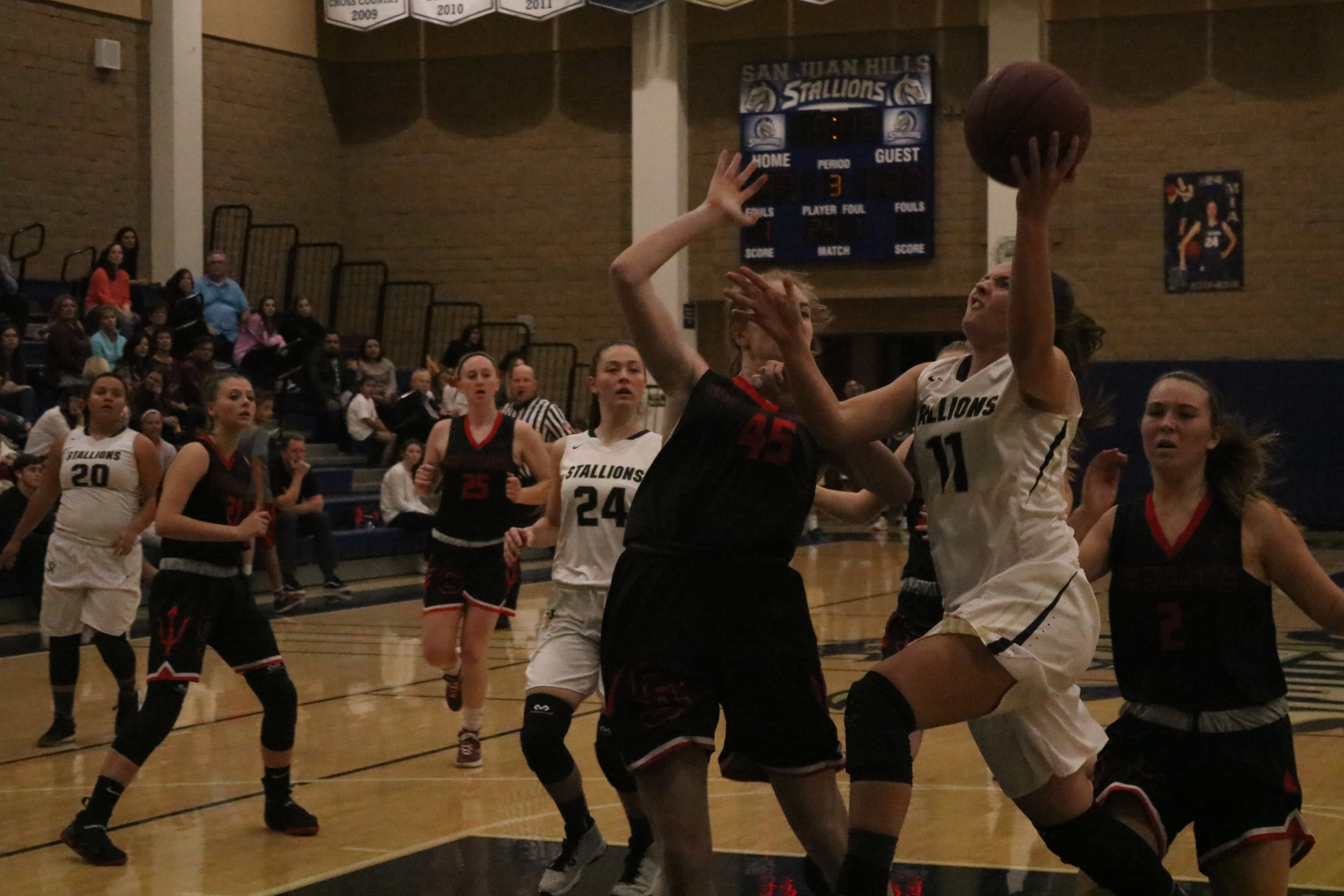 The Stallions opened the game with a 12-0 run and outscored San Clemente, 25-9, in the third quarter to earn the win, 64-56, in a South Coast League game at San Juan Hills High.

“We were definitely the shorter team in this,” San Juan Hills junior Liza Hladek said. “We wanted to play bigger and fast. We wanted to get the ball as fast as we could. We did a good job of that tonight.”

San Juan Hills (7-13, 2-2) had lost seven of eight games through the holiday break and the start of league, but the Stallions have found their form in back-to-back league wins over El Toro and San Clemente.

“Over Christmas, you lose some players and it really hurts the chemistry,” San Juan Hills coach Nicole Riscica said. “One of the things is all coming together and having these good practices, being able to work on our systems has gotten us back to understanding what our game.”

San Clemente (9-12, 1-3) has alternated wins and losses in its last six games and gives the edge for third place and a playoff spot to San Juan Hills.

“We’re just trying to see if we can go to playoffs,” Riscica said, “and see where we go from there.”

The Stallions were ready from the jump and led by Hladek. The junior guard scored nine points in the first quarter and 11 in the third quarter en route to a game-high 29 points.

“She was amazing,” Riscica said. “She was phenomenal. Her attacks, her shots, her defense. Liza really showed her stuff today. She always plays with heart, but today, it really came through.”

After San Juan Hills’ opening run, San Clemente clawed back and used its size advantage to cut the deficit to as low as three points in the second quarter.

Ella Gardiner led the way down low for the Tritons with 12 points in the second quarter and a team-high 18 points overall.

San Juan Hills led by six points at halftime and pushed its advantage to 20 points after a dominant third quarter.

Jordan Parkhurst also scored 11 third-quarter points for the Stallions and helped amp up San Juan Hills’ full-court press and aggressive defense in the quarter. Parkhurst scored 17 points in the game.

“It really slowed down their passing,” Hladek said. “They’re really big inside, so being to stop them was huge.”

“Play scrappy, get on the floor. That’s how we like to play.”

As the game slowed down in the fourth quarter, San Clemente wouldn’t go away quietly. Strong play from Shae Waters and Morgan Thomas cut the Stallions’ lead all the way down to six points in the game’s final minutes.

Waters and Thomas each scored 13 points.

San Juan Hills starts the second half of league play on the road at Aliso Niguel on Thursday, Jan. 25.

San Clemente’s next league game is also at Aliso Niguel on Jan. 30.