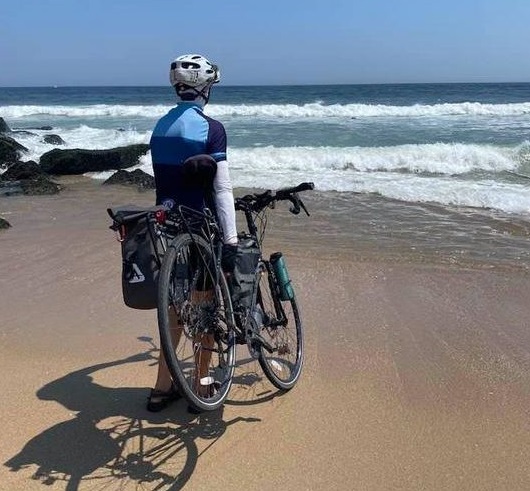 One could imagine that bicycling 2,899 miles across the country would be a one-and-done ordeal. Well, not for San Clemente resident Paul Webb.

On Friday, Aug. 6, the 67-year-old completed his coast-to-coast journey to Asbury Park, New Jersey, where he dipped the front tire of his bike in the Atlantic Ocean—a full-circle moment symbolizing the end of the trip that started from the San Clemente Pier this past April.

Embarking on the trek so he could attend his high school’s 50-year reunion while also raise roughly $30,000 for the Challenged Athletes Foundation (CAF), Webb thought to himself, “What am I going to do next?”

“My identity is that of a guy riding a bicycle and the center of attention as you go across the country,” Webb explained of the feeling he had last Friday. “Now that the ride is over, I get to reinvent my identity. … Am I a charity cyclist? Is there such a thing?”

As Webb puts it, he’s “hooked” and already planning his next adventure.

“I believe that if Canada opens up and I (have) the right equipment, I can ride to Alaska from Southern California,” Webb said. “It’s going to depend on whether the roads are frozen enough in certain places or pushing my bike up for miles and miles in wet grounds.”

Should he decide to do the Pacific Coast trip, Webb intends to use it as another fundraising opportunity, this time to benefit athletes who have suffered from concussions and working through their impacts.

“My son is a surfer in San Clemente and at 20 years old has suffered a surfing concussion by landing in the beach, so I now have a personal interest, as well as genuine interest in helping others,” he said, adding: “I think that’s a great incentive for me to do another charity ride.”

As a former lifeguard and professional athlete with experience in downhill ski racing and long-distance swimming, Webb wanted all the money he raised to go to CAF, a nonprofit that supports individuals with limitations who are pursuing athletic activities.

“I was glad to have, in that moment, Tara … next to me because that was the inspiration,” Webb said of the teen and the foundation.

Dunfee, along with some of Webb’s former classmates, joined him on the New Jersey beach, where he received heaps of praise and cheers.

“It was nice having those people there, and it was nice that I could share it with them,” he said. “What was unexpected was the round of applause from all the people on the beach.”

Those same classmates, he acknowledged, were a primary source of inspiration and motivation to keep pedaling for the last 3½ months. Knowing that he was going to be asked to speak at his reunion on Saturday, Aug. 7, Webb used that to endure, as he didn’t want to let anyone down.

“That moment, standing there saying thank you to everyone was something I thought about,” he said of this past weekend’s Neptune High School reunion. “I knew I was going to be there and thank them for the inspiration that they gave me to get through (months) of bike riding.”

Along the journey, Webb said he came across a bevy of wonderful individuals who reinforced his confidence in humanity.

“I met the greatest people in the world, in all different areas of the country. One thing they all had in common is they were super-friendly, super-helpful,” he said. “If you need to have a boost of confidence in human nature, go ride your bike across the country.”

Webb recalled that just outside of St. Louis, Missouri, he broke down with a flat tire. It was no more than 30 seconds, he said, before a car pulled up, with the driver asking if Webb needed assistance.

The driver later came back with his son and a truck so they could drive Webb to a bike shop. They also offered Webb a home-cooked meal and let him sleep in the son’s treehouse in the backyard.

“I made a point of not going into anyone’s home because of COVID,” Webb explained, noting that throughout the trip, families and business owners offered him their yards and other places to rest at night.

Though he didn’t experience any major setbacks, Webb said he did get hypothermia in Colorado, where he got caught in a hailstorm without any protection from the elements.

“I kind of let myself get cold, because I knew I was coming to a town with a hotel,” he said. “I spent the night getting my body core (temperature) back up.”

Since finishing the trip, a couple of questions Webb said he has been asked a lot: “How are you getting back home? Are you riding back?” When he explains that he’s flying back later this week, “I can see the disappointment in their faces, and it’s been bothering me for the past three days,” he said.

As Webb already noted, though, he’s hooked on the feeling. After he flies back to Southern California on Aug. 14, he intends “to plan my next bike adventure.”