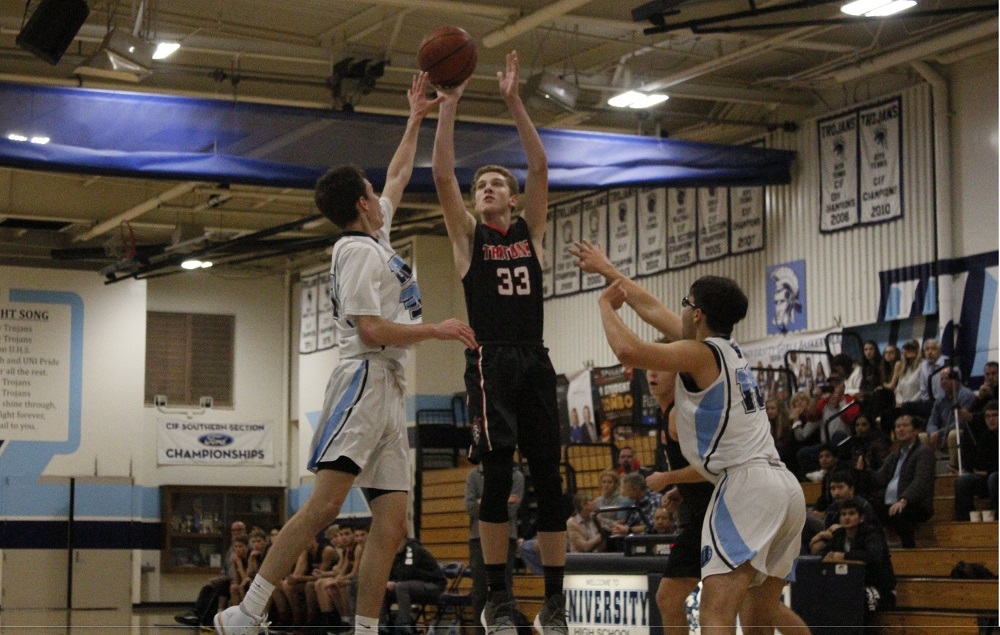 IRVINE – Down 14 in the fourth quarter with your leading scorer in street clothes, that’s about the time that plenty of teams would pack it up and move on to the next one. Save energy. This one’s lost.

That’s where the San Clemente boys basketball team found itself on Wednesday night, but the Tritons got their hands dirty and clawed their way back at University High School.

San Clemente went on a 20-6 run in the fourth quarter to tie the game at 68-68 and tied the game again on a Jack Carroll three-pointer with 4.5 seconds remaining to force overtime. However, University landed the deciding blow with a buzzer-beating lay-up in overtime to take the win, 83-81, in a SoCal Elite/Gary Raya Classic game.

San Clemente, once down by 14 in the 4th, ties the game with University, 73-73, on this 3 by Jack Carroll with 4.5 seconds remaining. Gary Raya Classic. @SCTritonHoops @SCHSTritons @SCTimesNews pic.twitter.com/VczPJJEopI

“I was really happy with the effort,” San Clemente coach Marc Popovich said. “We’ve played our frickin’ butts off, but we just didn’t get the result we rightly deserved tonight. I’d be much more encouraged with a win, but I’m encouraged with how they’re playing.”

The Tritons continue in the Gary Raya Classic on Friday at Woodbridge High School, and Popovich expects the Tritons will take on another host team in Woodbridge.

San Clemente just couldn’t get its shots to fall early, but the Tritons continued to hang around even as University seemingly nailed every shot it took.

“In the first two minutes, we were terrible,” Popovich said, “but after that, I thought we were pretty even with them for the rest of the half. We cleaned things up. We just didn’t make any shots in that first half.”

San Clemente trailed after the first quarter, 19-13, and despite a 13-point University lead in the second quarter, the Tritons fought back for the first time in the game with a 12-2 run to cut the lead to three.

University surged again late in the third quarter and early in the fourth quarter for the 14-point advantage. That’s when San Clemente got to work on defense and, almost more importantly, on the glass to earn second chances on offense.

“Andrew Herbert, Max Rumph, all those guys were flying in and getting boards,” Popovich said. “Matt Herrod, he’s 5-10 and he probably had three offensive boards in that fourth quarter. It was awesome.”

Down 68-65, the Tritons battled to try and tie the game and won three consecutive offensive rebounds before Popovich called timeout. On the ensuing possession, San Clemente got another offensive rebound that was kicked out to Cuevas for the game-tying three-pointer.

University got the lead back and was ahead, 73-70, for more San Clemente dramatics.

San Clemente took the ball down court, and Carroll got the ball in front of the San Clemente bench. Carroll ran along the perimeter to the top of the key where he pulled up and sank the three-pointer to tie the game, 73-73, with just 4.5 seconds remaining.

“It’s good to see them trusting each other and have other guys step up,” Popovich said. “With (Anthony Smetona) out, it’s the other guys needing to step up, so when later in the year when we need it, they’re used to it. Like Jack Carroll hitting that shot. If Anthony’s out there, there’s no way we’re running a play for Jack. So that gets him used to taking that shot.”

In overtime, the Tritons set the pace with the first three leads of the period, all by two points.

University got the final possession and raced down court for the lay-up and the win at the buzzer.