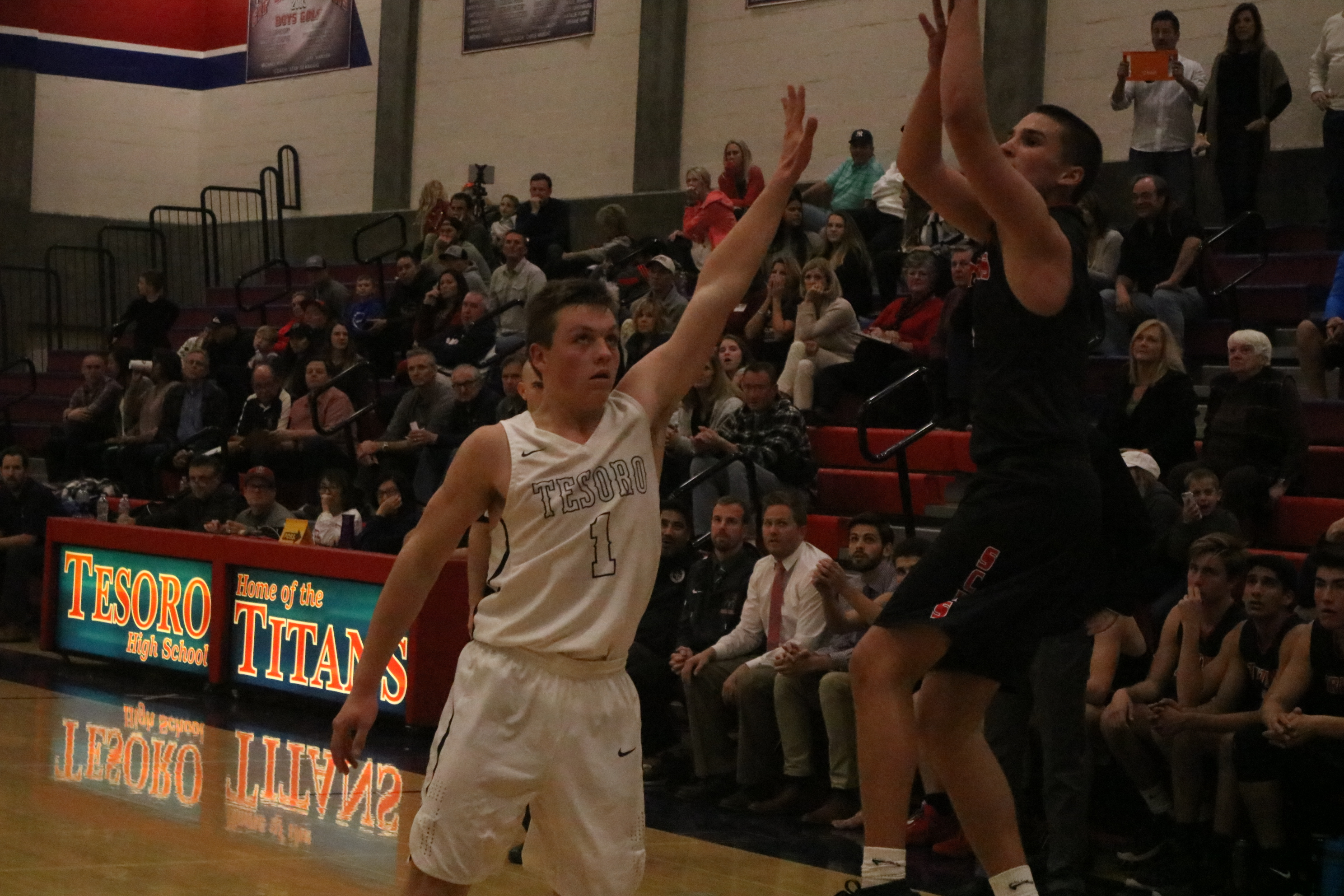 LAS FLORES – It seemed as the cards continued to stack up against San Clemente on Friday night.

The Tritons were on the road against Tesoro, who won the first match-up between these teams in a heartbreaker for San Clemente. The Tritons’ leading scorer, Jacob Nemeth, injured his ankle in practice and tried to play through the first quarter, but he sat in the second quarter.

Then it was a nightmare start for San Clemente with a 10-0 opening run for Tesoro and a 16-point deficit in the second quarter.

But that’s why they play four quarters and the full 48 minutes.

San Clemente chipped away in the second half, outscored Tesoro, 24-6, in the fourth quarter and got the go-ahead three-pointer from Anthony Smetona with just over a minute to play to come back for a huge league win, 54-47, at Tesoro High.

San Clemente’s Anthony Smetona talks about @SCTritonHoops huge comeback win over Tesoro, 54-47, and his go-ahead three-pointer with just over a minute to play. pic.twitter.com/46zBt70ipj

“That was big,” Smetona said of his shot. “Probably the most adrenaline I’ve had in my life. After I made that shot, I was like ‘wow, we can really win this game. We’re up against Tesoro without Jacob Nemeth.’”

“It’s a huge momentum builder for us,” San Clemente coach Marc Popovich said, “and we’ve got to keep it going next week. That’s the most important thing we can do.”

Tesoro was primed and ready at the start with an efficient and punishing offense and an impenetrable wall of arms on defense.

The Titans led by 13 points after the first quarter and by 14 points going into halftime.

“My mood is surly (at that point),” Popovich said, “and we have to find a way to get back in this thing. That’s our job as coaches. Our kids played their frickin’ tails off and executed everything we wanted to do in the second half.”

San Clemente went away from its slow-down, half-court game from the first half and turned up the pressure to try and get out and running.

The Tritons made up some ground in the third quarter but were still down by 11 points.

The tide turned in the fourth quarter as the fouls piled up with both sides driving to the hoop for contact. San Clemente took advantage and hit the majority of its free throws, but Tesoro started adding up misses and losing its momentum.

The Tritons possessed the final burst scoring the final 12 points of the game including Smetona’s three-pointer for the lead, 49-47.

“The hump baskets,” Popovich said, “Smetona’s three to get us over the hump on the comeback, that’s always the toughest one to get, and we got it.”