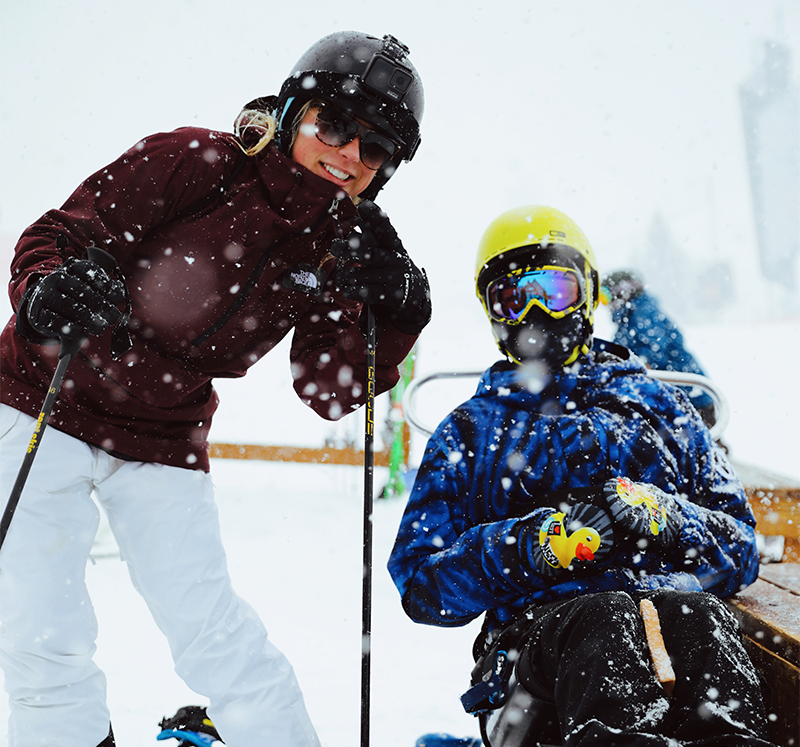 San Clemente High School alumna Shelby Thompson has quickly made a name for herself as a young documentary filmmaker. The 23-year-old’s film debut, Relentless, recently earned her a nod as a finalist for the 2019 Student Academy Awards.

Relentless, a film about Marty O’Connor, a once-aspiring professional snowboarder who suffered a paralyzing spinal injury several years ago, documents his “journey of self-improvement” as he learns to snowboard with an adaptive chair.

O’Connor, who grew up in Orange County and attended University of Colorado Boulder as a collegiate snowboarder, holds a B.A. in Film Studies and also an MBA in Marketing & Entrepreneurship. He currently runs his own creative agency, the Marty O’Connor Creative Agency, or MOCA,.

Thompson, a student-athlete herself, explains that in 2012, after spending a day out with friends, a dehydrated O’Connor was walking out of a pizza restaurant when he got lightheaded, slipped and then swan-dived onto his neck.

“It was just mind-blowing,” Thompson said of O’Connor’s spinal injury, pointing out the irony of the incident for a snowboarder who had grown up doing tricks and “insane jumps.”

Thompson, whose film will be screened at Stance headquarters in San Clemente on Thursday, Jan. 16, spoke with San Clemente Times over the phone this week to talk about her movie and O’Connor’s journey to the mountain, seven years after his accident.

SC Times: For our readers, could you talk about what this movie is and give a brief synopsis?

Thompson: Basically, this documentary is about a quadriplegic who kind of went on a journey of self-improvement and a journey of challenges. Just watching his growth and accepting his accident when that happened. We go through his life, beginning with him trying to be a pro snowboarder as a teenager, follow his life in Boulder after a freak accident. Everything was going for him, he had a great job and it was kind of all about filming life 2.0—him trying to embrace his challenge. We ended up taking him back up the mountain, where he snowboarded with an adaptive chair. We documented, really, his transformation process. It’s a whole different process for him, something he didn’t do for six years after his accident. We got that on camera. It was a journey of self-improvement after a freak accident that could happen to anybody.

SCT: How did you and the film’s subject, Marty O’Connor, meet?

T: I was a junior at Chapman University; he graduated with an MBA about four years before I got there. He was running an internship program for Divert Collective, which is an action sports company. I was a content producer. He was my boss for a full year, before I decided to choose a major and film him. We worked well for that year; it was kind a no-brainer for me.

SCT: What do you hope viewers will take away from this film?

T: We want to inspire individuals to embrace challenges and achieve their goals through his personal testament and my personal testament in college. We want to raise spinal cord injury awareness through his foundation, the Marty O’Connor Foundation. And because the documentary focuses a lot on his caregiver, which is his mom, we want to celebrate the millions of caregivers in this country and be able to provide tools and resources for them through this Foundation.

SCT: You had switched majors a few times before meeting O’Connor. What was it about meeting him that inspired you to switch once more and transfer into film school?

T: So film school was something that was always in the back of my mind. I was just kind of not thinking about my future and kind of, honestly, wasting college away, as I put it. But I think, seriously, almost the first or second day after meeting Marty, he made it super clear to me and the other interns in the program, that it’s going to be a great opportunity. “You’re not going to waste time here.” He kind of ingrained that into my brain—to seize every moment. I applied to film school and got in the next semester through my content that I collected through the Divert Collective. I played around with other ideas for my senior thesis, but he was my obvious top choice.

SCT: What was it like following O’Connor around with a camera? How long did you work with him on this film?

T: I think, in total, the film was six months long. But we joke about it now, but I was so nervous at first. There were so many vulnerable moments. I was extremely hesitant to kind of go to his house and dive into his life, but he’s extremely open and straightforward with me. We had a great communication system. It was so run-and-gun filming: “Hey, are you free tomorrow afternoon?” I’d come, and it was put together super-fast, considering that I was definitely super nervous at first. But what happened to his life after was super awesome.

SCT: Your focus has been on sports, telling stories about their passion, true grit and extremes. As I understand, you were an athlete yourself, specifically playing lacrosse. How has being an athlete shaped the way you tell the stories you’re documenting?

T: So, I’ve been playing sports my whole life, all four years at Chapman, but for some reason all I watched were videos on Red Bull and of Kelly Slater. I loved what it was all about. For some reason, when people push the limits, action sports, team sports, it sparks my interest.

SCT: When you were bouncing around from major to major, were you searching for something where you can remain in the sports industry?

T: Sports has always been my passion, I thought I always wanted to be a D1 (NCAA Division I) lacrosse coach. In the back of my head, I knew I wanted to represent people in sports or in production in sports. That may change over time. But that has been the underlying thing, my passion.

SCT: At 22 years old, you were a Student Academy Award finalist. Could you talk a little about what that accomplishment meant to you as such a young filmmaker?

T: That was honestly something that I was not expecting. Something I don’t think a lot of people were expecting for me, especially my classmates. But for that to resonate with people on the Academy was incredible. Just that honor alone opened up so many doors that I couldn’t even imagine. That was our jumping-off point of resonating with people that meant something. That got attention from a lot of schools around the country. The feedback we got was so inspiring. That’s when we knew we had something on our hands that we had to work with.

SCT: What are you working on next? Anything you can tease to our readers?

T: As of now, I’m kind of focusing on gaining more production and directing knowledge here at Fox Sports and kind of just doing freelance work on the side. But I’m actually hoping to make another documentary, be part of another team that makes documentaries. My goal one day is to hopefully work with HBO’s sports documentaries.

To RSVP for the exclusive screening of Relentless, go to relentless-film.com. The screening is scheduled for 6 p.m. at Stance headquarters at 197 Avenida La Pata, San Clemente.