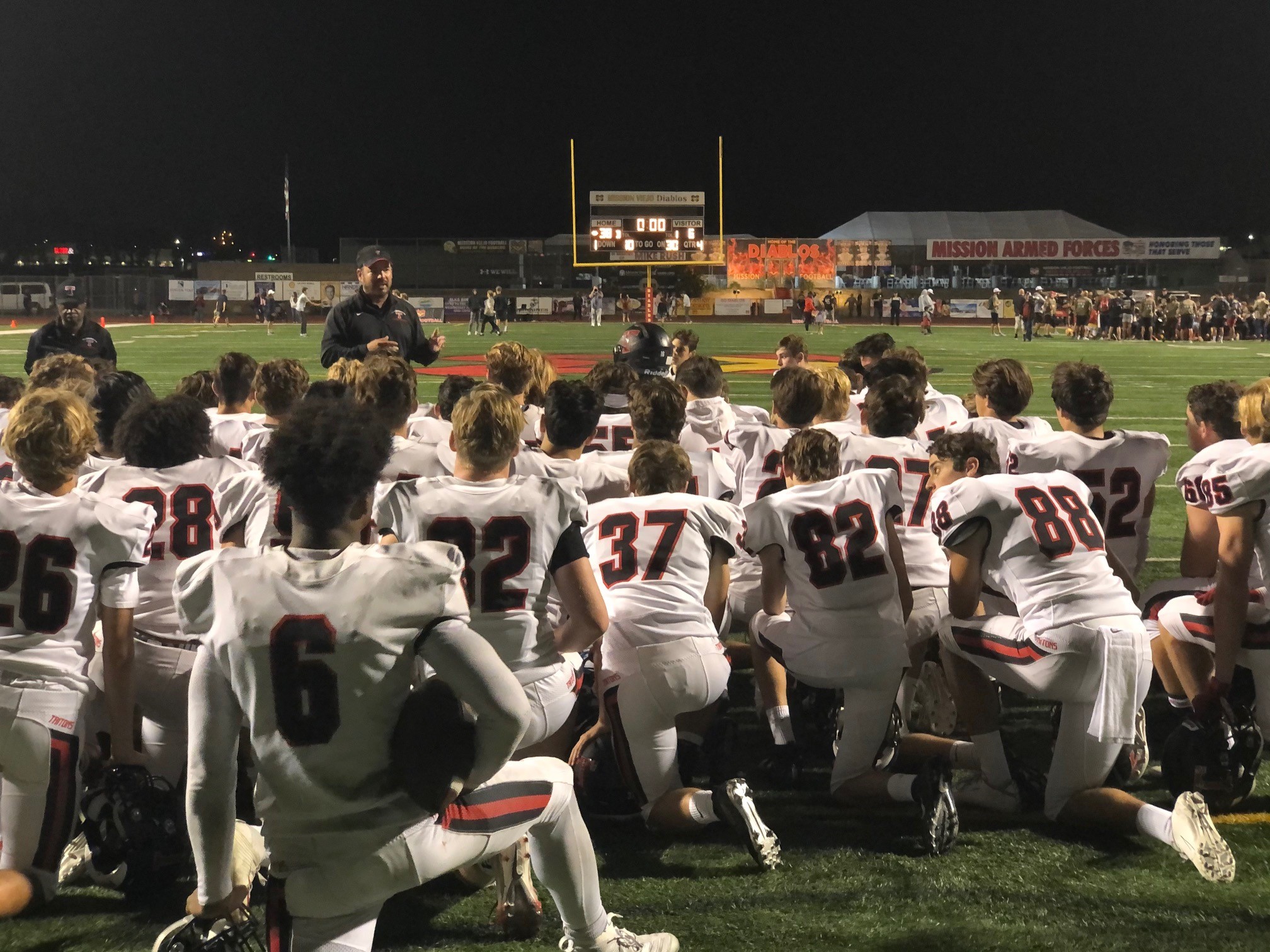 MISSION VIEJO – It was always going to be near impossible for Friday’s San Clemente-Mission Viejo match-up to get close to the theatrics of last season’s South Coast League championship game, and right from the start, Mission Viejo made it clear there would be no repeat by the Tritons.

“We had to play really well, and we didn’t play really well in the very beginning of the game,” San Clemente coach Jaime Ortiz said. “Next thing you know, it’s 21-0. I liked the way our kids battled back, 21-6 at halftime. Too many turnovers on offense, some mistakes on defense, they (Mission Viejo) were the better team tonight.”

San Clemente ends its regular season at 8-2 overall and 3-1 in the South Coast League. The Tritons will have a bye week next week, and Mission Viejo (9-0, 3-0) will host Tesoro. The Diablos will be favored to beat the Titans and return to the league championship throne outright.

Last season’s loss to San Clemente was Mission Viejo’s first league loss since 2008 and their first loss to the Tritons since 1999. Mission Viejo clinched at least a share of the league title for the 10th time in the last 11 seasons.

Going forward, San Clemente awaits its CIF-SS playoff fate. Going into Friday’s game, the Tritons, ranked No. 10 in Division 1 and 2, were on the outside of the elite Division 1 selections, and even a win over Mission Viejo, ranked No. 4, and a league championship might not have put them into that eight-team grouping.

San Clemente will end up in Division 2 and could earn a high seed and a first-round home game.

CIF-SS brackets will be released on Nov. 3, and the playoffs will begin on Nov. 8.

Out of the gate on Friday, San Clemente was going backwards.

The Tritons were assessed a personal foul on the opening play of the game, and their first official offensive play was intercepted at San Clemente’s 16-yard line.

San Clemente got a quick spark of offense to open their next drive, but that spark was immediately snuffed out on another interception and 54-yard return for the pick-six touchdown and a 21-0 Diablos lead.

The Tritons did get on the board late in the first quarter.

Late in the second quarter, San Clemente came up with another fumble recovery.

Mission Viejo put together a 10-play drive and was in scoring position, when a handoff was mishandled and pounced on by Trenton Brail. The San Clemente defense finished the regular season with 32 turnovers forced in 10 games, 19 interceptions and 13 fumbles.

Nick Billoups spurred on the San Clemente offense with a 33-yard run and a 12-yard pass to Cian Smith.

San Clemente called timeout after Smiths’ reception with two seconds remaining in the first half. As the Tritons lined up for a field goal, Mission Viejo proceeded to call all three of its first-half timeouts to ice Thompson.

FIELD GOAL: After Mission Viejo used all three of its timeouts to try to ice the San Clemente kicker (after SCcalled its last), Cole Thompson kicks a 41-yard FG straight through at the buzzer. Mission Viejo leads at halftime, 21-6. @SCHSTritons @Tritonfootball @colethompsonkp pic.twitter.com/Y5R5BVmASf

After the delay, the Navy-bound Thompson knocked through the 41-yard field goal for the 21-6 halftime score, Mission Viejo ahead.

San Clemente will use the bye for some much needed rest, but the Tritons will maintain their focus with the playoffs on the horizon.

“It’s a little bit of football, but also some time off,” Ortiz said. “We’ve been going since August 1, or something like that. It’s been a long season already. Part two of the season is over, and part three starts a week from Monday.”