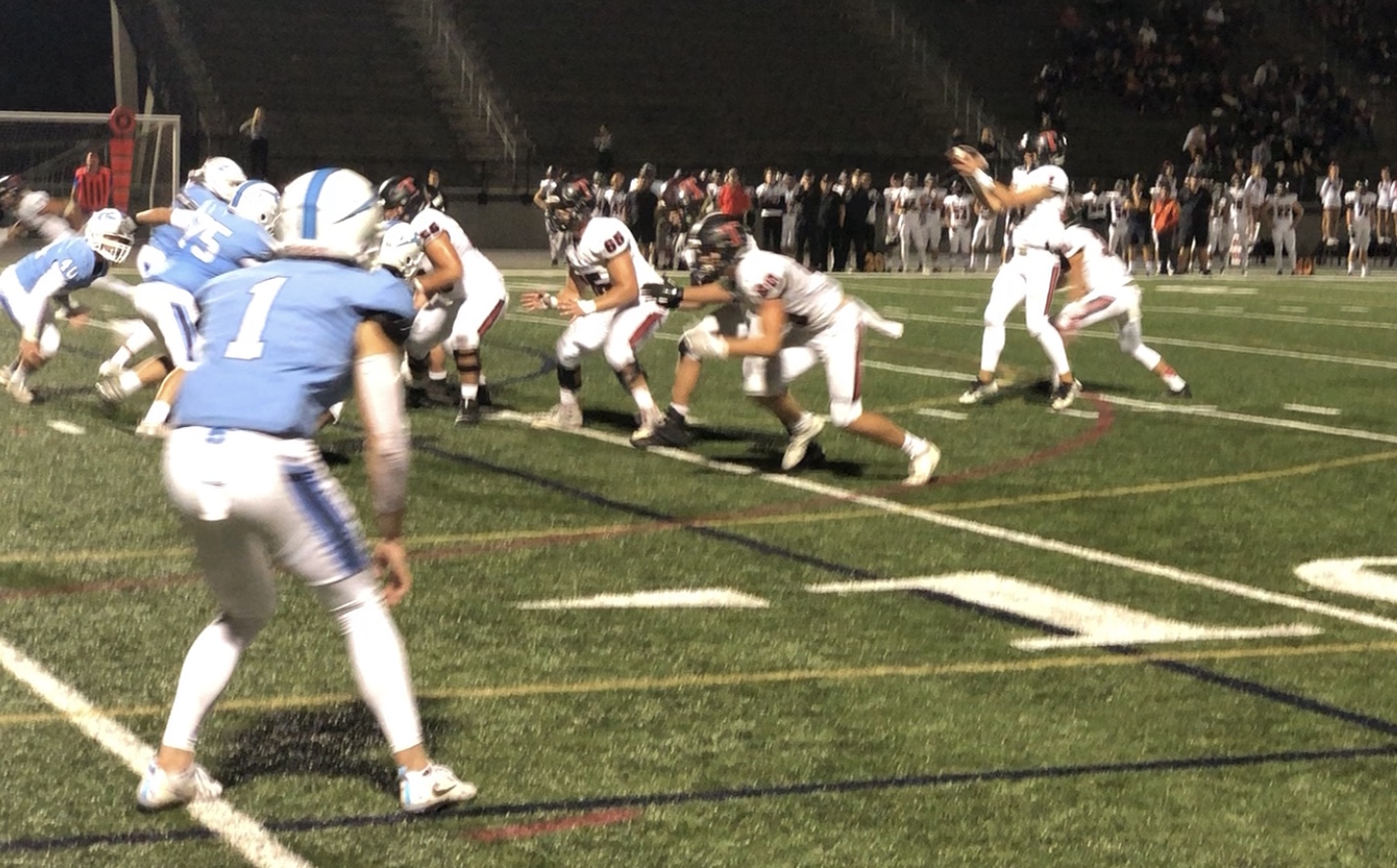 NEWPORT BEACH – The San Clemente football team knew what it had to stop against Corona del Mar, but it was a matter of if they could stop it.

Unfortunately for the Tritons, the Sea Kings’ exceptional talents won out on Thursday.

Quarterback Ethan Garbers threw for 371 yards and four touchdowns, including 116 yards and three TDs to receiver John Humphreys, to lead Corona del Mar over San Clemente, 42-21, for the Tritons’ first loss of the season in a nonleague game at Newport Harbor High School.

“There’s a reason why one’s going to Washington (Garbers) and one’s going to Stanford (Humphreys),” San Clemente coach Jaime Ortiz said. “We tried to get them off their track a little bit. We were in position some times, but when your receiver is 6-foot-6 and the corner is 6-1, the receivers going to make a play.”

Corona del Mar (5-0) is ranked No. 3 in Division 3 and was just the latest of San Clemente’s high caliber nonleague opponents. The Tritons (5-1) move on to their South Coast League schedule next week with a homecoming date against Tesoro on Friday, Oct. 4.

Ortiz said his group is ready for league play and the defense of their South Coast League title.

“We’ve played six quality opponents,” Ortiz said. “There’s been no cupcakes on our schedule. Our kids battled every single week.”

Defense has been San Clemente’s calling card this season, and while the Tritons did add two more turnovers for a season total of 19, Corona del Mar ran for 130 yards in addition to Garbers’ air yards for 501 yards of offense.

“Individuals were having little breakdowns,” Ortiz said of his defense. “We’re waiting for one guy to make a play, and we weren’t able to get that done. It’s going to take a team effort for us.”

San Clemente had a nice night offensively with production from both quarterbacks.

Drayton Joseph threw for 128 yards and a touchdown to Cian Smith, and Nick Billoups threw for 97 yards and two touchdowns to Preston Rex and Cole Batson. Billoups also pulled in an interception on defense.

“In pregame I kind of felt it (the team’s low energy),” Ortiz said. “It’s my fault as the head coach. We didn’t come to play. We weren’t in the right mind frame today.”

Corona del Mar capitalized with Garbers first touchdown pass to Humphreys. Garbers threw a high ball that both Humphreys and Billoups got their hands on, but the taller Humphreys wrestled the ball away for the score.

Corona del Mar took its next drive into the second quarter and finished on a 1-yard touchdown run for the 14-0 lead.

Billoups connected with Bentley Redden on a 42-yard play to flip the field on San Clemente’s next drive, and the Tritons got on the board with a 6-yard touchdown pass to Batson.

However, the Tritons could never get any closer, as Corona del Mar answered right back with the 49-yard bomb to Schlom.

San Clemente came back on its next drive with Billoups’ 12-yard TD pass to Rex, and Billoups snuffed out the Sea Kings’ quick score attempt with his interception of Garbers to end the half at 21-14.

Garbers was deadly efficient on the opening drive of the second half that was capped by his second TD pass to Humphreys, an easy throw.

San Clemente’s ensuing drive ended in disaster when the Tritons had a punt blocked for the second straight week, and Corona del Mar recovered in the end zone for a touchdown and a 21-point lead.

The Tritons regrouped with an 11-play drive led by Joseph who hit Smith over the shoulder for a 13-yard TD pass on the right side.

Garbers connected on another score with Humphreys to end the next drive for the final score of 42-21.