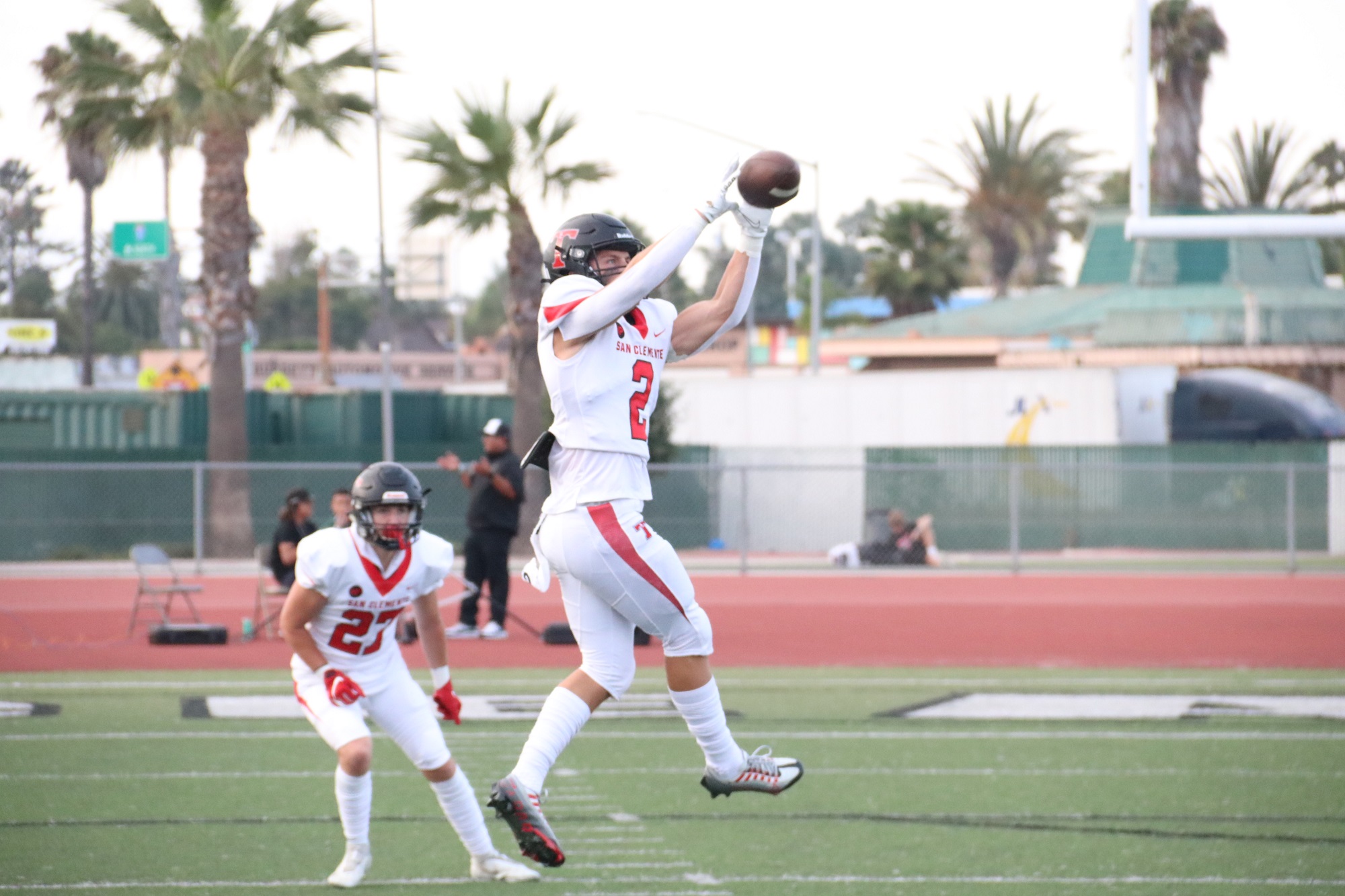 OCEANSIDE – The San Clemente football team showed off everything you’d want in a season-opener.

The Tritons got four touchdown passes from quarterback Broderick Redden in his debut, including over 100 yards and three touchdown passes to senior Thomas Hartanov, over 100 yard rushing and two touchdowns from Blake Allen and stifled Oceanside to take their fifth consecutive Battle for the Base, 48-7, on Friday, Aug. 18, at Oceanside High School.

“That’s one thing, last year we weren’t as multidimensional,” San Clemente coach Jaime Ortiz said. “We’re able to spread the ball around with Blake running his tail off and Thomas and (Drew) Shanley. The kids showed anyone who touches the ball can score at any time. That’s important for us.”

San Clemente (1-0) returns to the north side of Camp Pendleton next week when they host Torrey Pines (0-1) in the Tritons’ home opener on Friday, Aug. 26.

Redden, a junior, made all the right moves in his varsity debut. Redden completed 10 of 14 passes for 198 yards and four touchdown passes.

“I think he did a great job managing the offense,” Ortiz said. “There’s a lot of pressure being the quarterback at San Clemente High School. He was efficient with the football, protected it and made throws when he had to.”

Redden had been in a battle with fellow junior Dylan Mills, a JSerra transfer, for the quarterback position all summer. The race had been even, but with Mills’ eligibility was still being held up by a pending CIF-SS decision, Redden got the top job against Oceanside.

It’s a huge opportunity to put his stamp on the quarterback position, and Redden made his mark immediately with a 54-yard touchdown pass to Hartanov. Hartanov took a short pass to the left, found a lane and sprinted for the score on San Clemente’s second play from scrimmage.

“(I felt) good. It was fun,” Redden said. “I was a little nervous at first, but we got into it and we got rolling.”

Hartanov exploded in space again just before the end of the opening quarter, with a pass to the right and run up the sideline for the 35-yard score and a 14-0 San Clemente lead. Hartanov finished with five catches for 121 yards and three touchdowns.

“We’ve been game planning for this all week,” Hartanov said. “Our coaches had us ready. They knew (Oceanside was) going to run a lot of man, so we kind of took advantage of that.”

Defensively, San Clemente made Oceanside (0-1) earn every inch of the field. The Tritons forced Oceanside into eight third downs in the first half with only two conversions.

Both of those third-down conversions, along with a pair of fourth-down conversions, came on the Pirates’ opening drive of the second quarter. Oceanside whittled away more than eight minutes of clock before quarterback Sa’ne Thompson hit Isaac Hernandez for the eight-yard score to cut the deficit in half, 14-7.

After Oceanside’s touchdown, the Tritons got yards in bunches en route to Allen’s 12-yard touchdown run for a 21-7 lead into halftime. Allen finished with 15 carries for 117 yards and two touchdowns.

San Clemente continued to shut down Oceanside on third down in the second half, as the Tritons pulled away.

Redden hit Mason Ord over the middle for a 34-yard pass, which was followed up two plays later on a 20-yard over-the-shoulder laser to Drew Shanley for Redden’s third touchdown pass of the game and a 28-7 lead.

Redden and Hartanov hooked up one more time on another short throw left. Hartanov cut and made his own space as he sprinted up the left sideline for the 21-yard touchdown and a 35-7 lead to end the third quarter.

San Clemente’s defense made one last impact play with an interception by senior Ethan Rea to open the fourth quarter. Allen later finished the ensuing drive with a nine-yard sprint to the end zone.

The Tritons recovered a fumble on the ensuing kickoff, and JP Bobo ran in a four-yard touchdown with just under five minutes remaining in a running-clock fourth quarter.