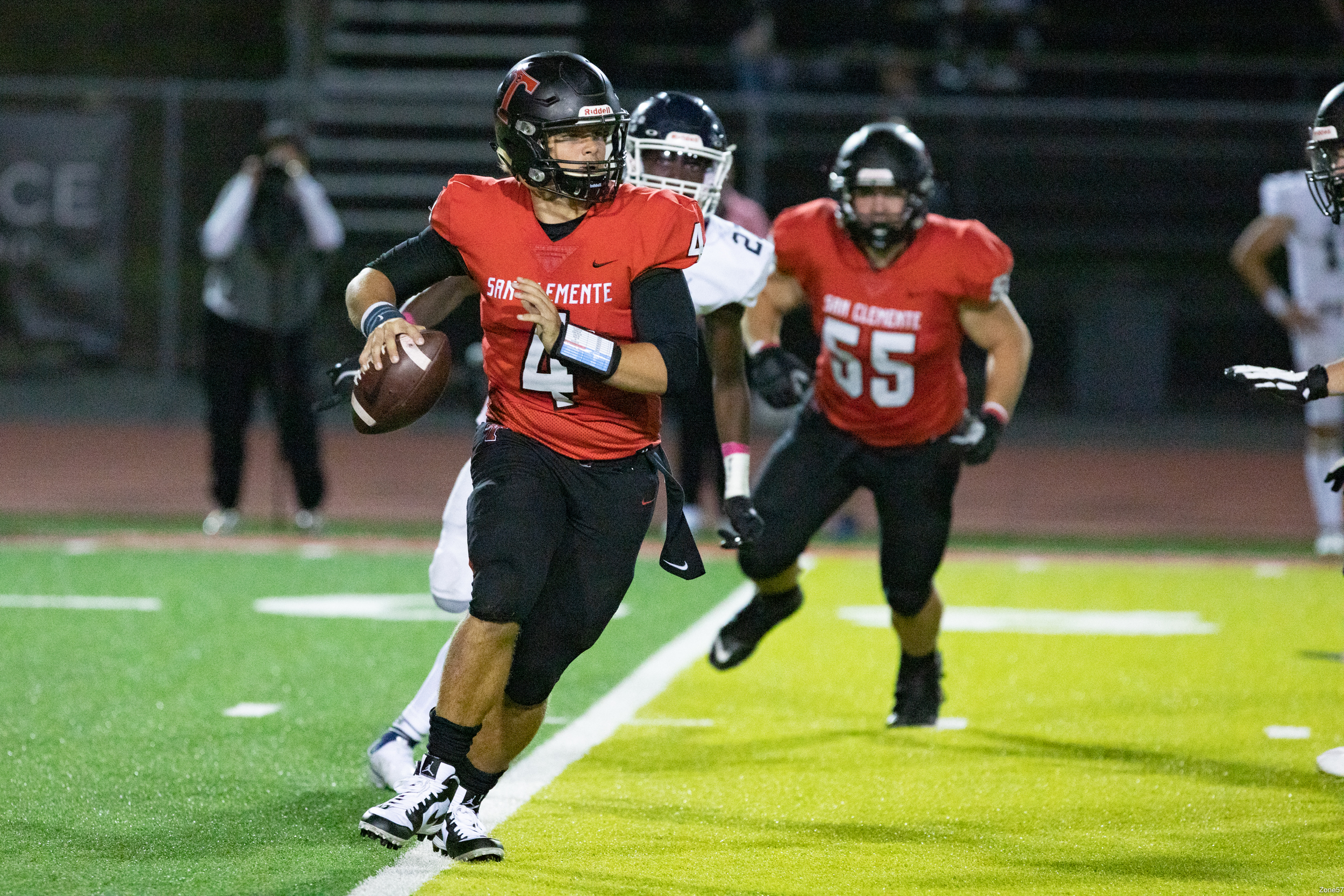 SAN CLEMENTE – It was the South Coast League opener. It was a local rivalry game. It was a playoff game.

The stage was large for San Clemente and San Juan Hills on Friday, Oct. 15, and the Tritons once again leaned on their defense to grind out a crucial victory.

San Clemente shut out San Juan Hills in the first half and forced two critical turnovers, a safety and three fourth-down stops to beat back the Stallions, 16-10, in the “Battle of La Pata” at San Clemente High School.

“What we saw on film was that you have to get the momentum early on them,” San Clemente coach Jaime Ortiz said. “Last two games against El Toro and Capo, they started off fast, and we started off fast this game, which is a good sign for us coming off a bye. I think that first quarter and a couple stops in the fourth quarter made the difference in the game.”

San Clemente (6-2, 1-0) grabbed that early momentum with a safety on San Juan Hills’ third offensive play and a five-yard touchdown run by Blake Allen on the ensuing short drive. The Tritons also denied points in the second quarter with an interception by sophomore Drew Shanley in the end zone on 4th-and-goal.

The Tritons led 16-0 at halftime with a 9-yard touchdown run by quarterback Lachlan Van Rosmalen in the final minute of the half.

San Juan Hills (2-6, 0-1) also came up with two fourth-down stops in the first half to keep the game close, including a stop of a 17-yard fake field goal pass on 4th-and-18. The Stallions got on the board on the opening drive of the second half with a 1-yard shovel pass-jet sweep touchdown from quarterback Michael “Butter” Tollefson to senior Cole Monach.

However, despite San Juan Hills’ five sacks and a shut out of San Clemente in the second half, it was Tritons’ defense that made the final impact. San Clemente forced a fumble on San Juan Hills’ next drive after their third-quarter touchdown, and in the fourth quarter, the Tritons held the Stallions to a field goal and stuffed a rush attempt on 4th-and-1 to end San Juan Hills’ last drive.

“We had opportunities, and we did not capitalize on our opportunities,” San Juan Hills coach Rob Frith said. “I thought our defense played exceptionally well all night. They did a good job defensively, and we just didn’t score enough points to win.”

San Clemente opened its South Coast League title defense with a win and takes the edge for one of the league’s two guaranteed playoff berths. The Tritons can clinch a playoff spot when they host Tesoro next Friday, Oct. 22.

Despite surging for 108 points in two wins after 0-5 start, San Juan Hills’ playoff hopes may be dying on the vine after Friday’s loss. The Stallions won’t be eligible for an at-large playoff berth with a sub-.500 record and are now looking up in the South Coast League standings.

San Juan Hills hosts league title favorite Mission Viejo next Friday, Oct. 22 and must force an upset for any shot at the CIF-SS playoffs.

“Next week, we try to go 1-0, just like any other week,” Frith said. “We don’t lose focus. There’s no enemy within. We are going to go out, continue to work hard and try to get better.”

Friday’s game was the fifth ever meeting between San Clemente and San Juan Hills, and it marked the fourth win in a row for the Tritons over the Stallions. At a six-point margin, it was also the closest match-up between the two teams since San Juan Hills took the very first game between the two by 14 points in 2015. San Clemente won the previous three games by 28, 18 and 15 points.

Despite San Clemente’s string of success over San Juan Hills, there was a palpable energy and intensity to the game, whether you measured the reaction of the student sections, the players or the referees. San Clemente was assessed eight penalties for 95 yards, including four personal fouls, and San Juan Hills was assessed eight penalties for 70 yards with two personal fouls.

“We’re so close to San Juan,” Van Rosmalen said. “We have a good rivalry with them. It’s always fun because you’ve got some people you know who are close. It’s a rivalry game, so it meant a lot to win tonight.”

San Clemente and San Juan Hills end their regular seasons in two weeks with both of their true rivalry games. On Oct. 29, the Tritons will play at Mission Viejo in a likely league championship game, and the Stallions will be at Tesoro for the “Battle for the Bell.”