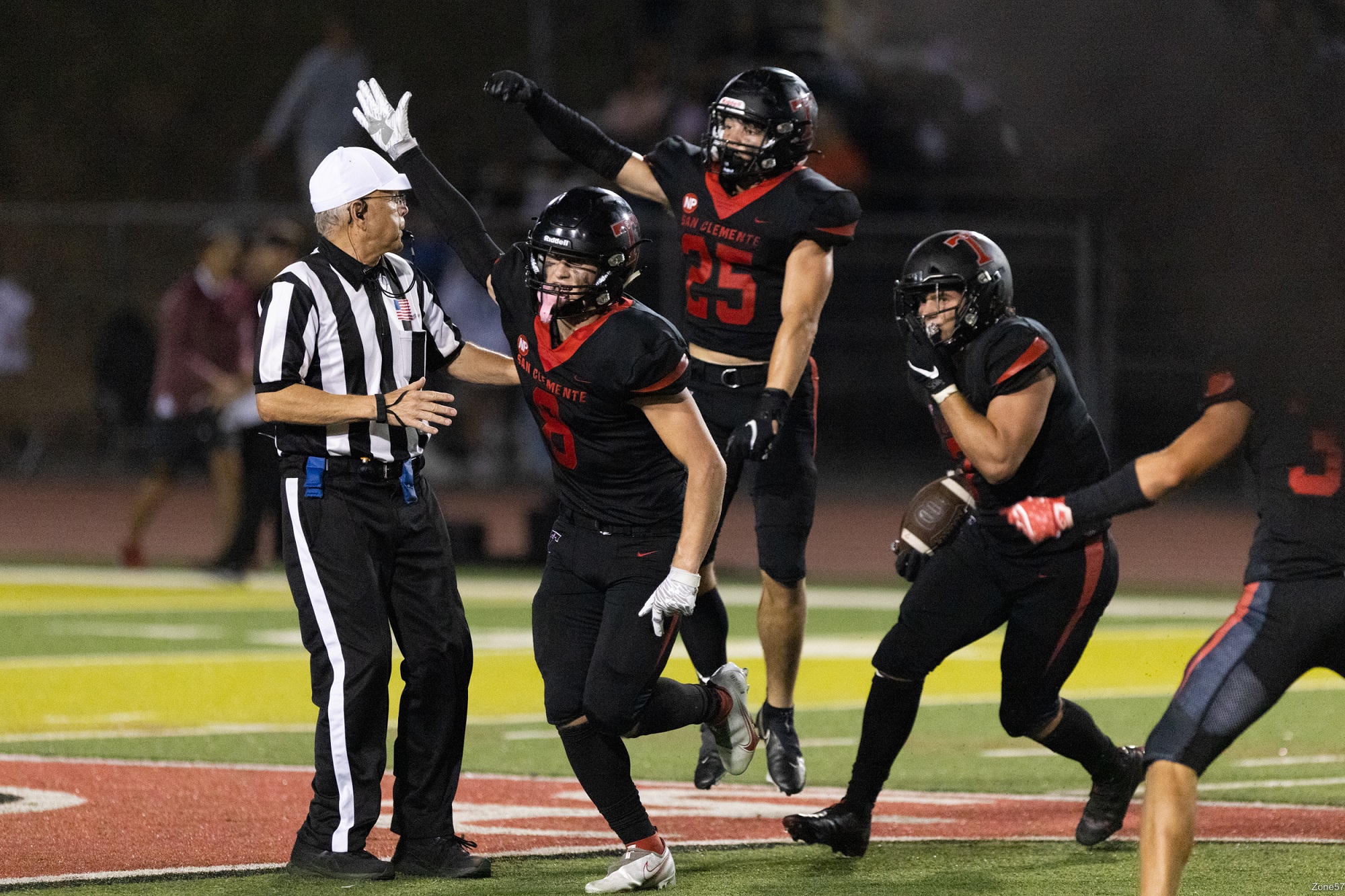 The Tritons (4-0) move on to face another undefeated and familiar Sunset League foe in Edison (4-0) this Friday, Sept. 16, at Thalassa Stadium. Look for live coverage on Twitter and Instagram, and game coverage here at sanclementetimes.com.

While Corona del Mar (3-1) was without its starting quarterback and running back, it was still a statement for San Clemente to return back to Orange County competition after its opening San Diego schedule with a big win over a ranked opponent.

San Clemente was ranked No. 10 in the county by the Orange County Register, and Corona del Mar was No. 7. The teams flipped positions in the latest poll on Monday, with upcoming opponent Edison ranked at No. 5.

In the first quarter last Friday, Corona del Mar muffed a punt, and Max Gonzales raced in to recover for San Clemente at the Sea Kings’ 25-yard line. Allen broke a 22-yard run, and Redden snuck in a 1-yard score for the 7-0 lead.

Allen ran in his touchdown early in the second quarter, and following Gerken’s interception and 34-yard return, Redden scrambled left and hit Hartanov for the 16-yard score with two seconds left in the half. San Clemente led 20-0.

Corona del Mar opened the second half with a lengthy scoring drive, but the Tritons’ defense held strong through the rest of the game. Kai Trager knocked in a field goal in the fourth quarter for San Clemente for the 23-6 final margin.

San Clemente made up for one Sunset League loss from last season against Corona del Mar, but last year’s game was a defensive gridlock, 7-3. If the Tritons are to make up for another defeat from a Sunset League opponent in Edison, there will still be quite a challenge ahead.

Nothing went right for San Clemente on the road against Edison last season in a 42-0 loss where the Tritons threw three interceptions and gave up a 97-yard fumble return for a score. Edison scored four rushing touchdowns on just 93 yards rushing.

While Edison’s leading rusher from last season graduated, the Chargers are still an elite group with its quarterback and receivers returning and playing in top form. Edison has scored 31 points or more in all four games, including a 34-13 win over Orange Lutheran on Sept. 2.

Edison last beat Palos Verdes, 35-7, on Sept. 8. Senior quarterback Parker Awad completed 12 of 23 passes for 215 yards, three touchdowns all to senior receiver Jackson Irwin and an interception. Senior running back Carter Hogue ran for 118 yards and a touchdown on 10 carries.

Aside from last season’s blowout, recent games between San Clemente and Edison have been tight affairs, with the previous four games from 2016 to 2019 – all four Triton victories – being decided by seven points or fewer.