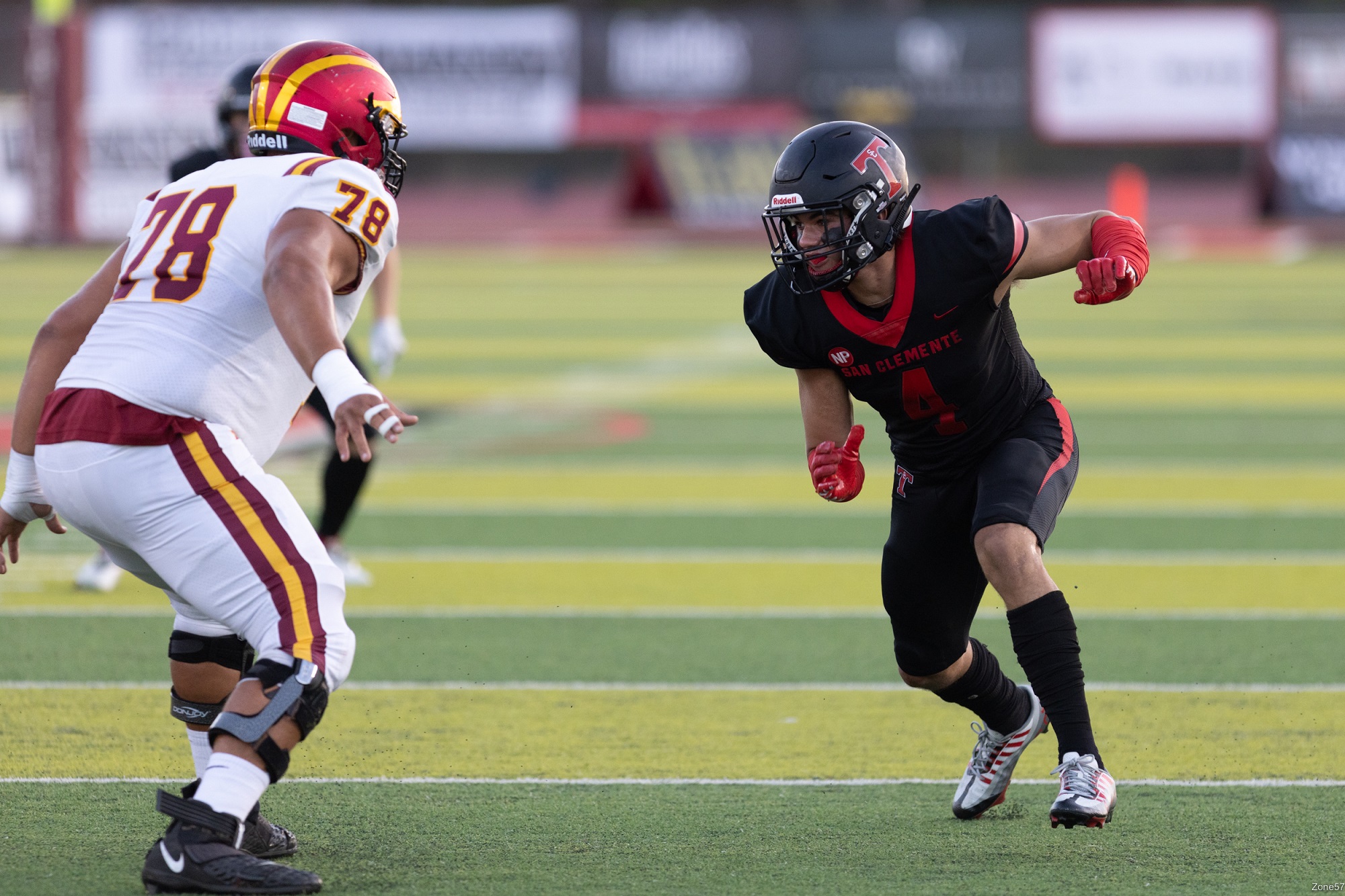 SAN CLEMENTE – Where the San Clemente football team’s offense grabbed the headlines through the first two weeks, it was the heart of the Tritons’ defense that held up on Friday night.

San Clemente posted its first shutout of the season by getting La Costa Canyon of Carlsbad off the field on third down and kept the scoreboard clean with a fourth-quarter field goal block by Nolan Reid in a victory, 17-0, on Friday, Sept. 2, at Thalassa Stadium.

“We had a pretty good game plan going in, and the kids executed,” San Clemente coach Jaime Ortiz said. “It’s always fun when you anticipate what they’re doing, and they actually do it. Kids get some confidence. Good team effort overall.”

San Clemente (3-0) moves forward to its toughest test of the season, as the Tritons travel to face Corona del Mar on Friday, Sept. 9, at Newport Harbor High School.

Friday night was also Military and First Responders Appreciation Night. San Clemente football hosted 297 active and retired personnel and their families for a free pre-game meal, and the Tritons wore black and red camouflage jerseys with “Semper Fi,” the Marine Corps motto, emblazoned on the front of the jerseys. Ortiz said the Tritons have 20 military and first responder families in their own ranks.

Against La Costa Canyon (1-2), San Clemente’s defense shut down the Mavericks for minus-18 yards rushing and 18 of 31 passing for 134 yards and forced two fumbles and three turnovers-on-downs.

“Defensive effort was phenomenal,” Reid said. “We always love putting up a donut. We went out there, did our job and played assignment football.”

San Clemente only allowed two third-down conversions by La Costa Canyon on 11 attempts, and both were as a result of penalties. The Tritons forced four three-and-outs in the first half and gave up only three first downs in the opening half.

The San Clemente offense was finally able to capitalize on field position in the second quarter. La Costa Canyon fumbled a punt snap at the end of the first quarter, and Ethan Rea came up with the stop to set the Tritons up at the 11-yard line.

Kai Trager knocked in a 28-yard field goal to put San Clemente ahead, 3-0.

A pair of La Costa Canyon fumbles swung the game fully in the Tritons favor, as San Clemente struck quickly to pull away.

First, the Mavericks muffed a punt return, and sophomore Max Kotiranta recovered for San Clemente at the 28-yard line. Four plays later, senior Blake Allen sliced into the end zone on a 5-yard touchdown run. Allen carried the ball 20 times for 86 yards and a score.

Then, on La Costa Canyon’s next offensive play, Reid struck with a sack and forced fumble that Owen Bolliger recovered at the 24-yard line. Junior quarterback Broderick Redden immediately connected with Mason Ord over the middle, and Ord battled to the end zone for the 24-yard touchdown reception.

Redden, who did not play last week due to a foot injury, completed 10 of 15 passes for 107 yards, a touchdown and an interception. Redden also carried the ball eight times for 20 yards.

La Costa Canyon missed a 42-yard field goal just before halftime, and that field goal would prove to be more meaningful than the Mavericks realized, as it gave Reid the information download he’d need later in the fourth quarter.

San Clemente opened the final frame with a combined sack by Reid and Connor Bachhuber on third down, and La Costa Canyon set up for the field goal to salvage points. However, Reid knifed through the line and got his hand on the ball to keep the Mavericks off the scoreboard.

“Their tackle kept putting his shoulder down, so I saw a gap I could slip through the first time,” Reid said. “The second time, I managed to get up a bit more and block it.”

Reid’s block to preserve the shutout meant that not only did the Tritons shut out La Costa Canyon on Friday night, but the entire San Clemente program shut out the Mavericks for the week of football.

“I told the kids earlier in the week that our freshmen won 35-0, our JV won 35-0 and the pressure was on the varsity to keep that going,” Ortiz said. “It’s nice for our kids to get that shutout.”

San Clemente’s offense managed to hold on to the ball in the second half and grind out the clock, but the Tritons couldn’t get to the end zone. Following Reid’s block, the Tritons put together their longest drive with an 11-play journey, but a 43-yard field goal wouldn’t go.